Your Future SU President? An Interview with George Walker 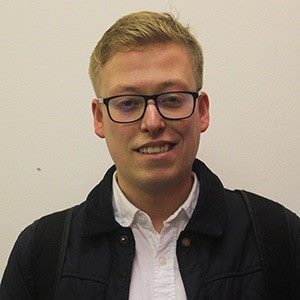 On Thursday afternoon I interviewed George Walker on his candidacy for president of the Durham Students’ Union. George is a third year politics student of Van Mildert College and is originally from Leeds.

What attracted you to running for the position of president?

I think what attracted me to run for Students’ Union president is that I’ve had amazing opportunities while I’ve been in Durham and I also know a lot of people back home who would not have been able to access such opportunities. I think the problems that Durham has with financial accessibility means there are a lot of students who come to Durham that actually can’t take part as much in university life as they may have liked to. I think that the Students’ Union could play a very positive role in making sure we can have a fairer Durham where more people can access the amazing opportunities on offer. So that is why I want to run for president: to lead a strong Student’s Union that can play that positive role.

I would say there are two important qualities a person needs to be a successful Students’ Union president. Firstly, good communication and public speaking skills, in order to communicate with the student body, and secondly sufficient managerial and organisational skills in order to run an organisation as large as the SU. What skills and experience do you have in these areas?

In terms of communication skills, I think I am generally very good at conveying ideas. I have done university debating and a lot of public speaking. I have already held representative roles such as Students’ Union rep in my own college which requires that dialogue with the students you represent.

In terms of the managerial side, I have held a number of positions on execs for societies both at the university and college level that has involved things such as organising events. So I think I have had quite a lot of experience in both and hopefully can bring a variety of skills to the table that could help me be an effective president.

In your manifesto you make three main promises. The first one is a promise to continue the #RippedOff campaign as president, continuing to press for lower accommodation fees and combating the rises in rent made by landlords in Durham. A lot of presidents including our current one have made similar promises but with little success, what makes you different?

Obviously this has been a long running campaign and I think we have seen progress with the huge rises we had a number of years ago having gone down. However that still isn’t good enough as accommodation fees are still higher than the maximum maintenance loan. I think the #RippedOff campaign this year has made a really good start as we have seen the Students’ Union leading from the front of the campaign rather than following other students, but I still think there is work to do. We need to get common rooms on board and work more closely with them. We can also do more to make a really student led, dynamic campaign that can get students involved. The protests we had this year can be even bigger next year, as I think there are more students that do care about this issue. This should put an effective case to the university that they need to provide better financial support to deal with the costs of accommodation.

Your second priority on your manifesto is that you want to combat discrimination and harassment in Durham. You have promised to work with staff to develop training programs to educate people on these issues. Are these training programs going to be voluntary and what sort of training would this involve?

We already have the active bystander training that’s offered to Freshers rep teams at colleges and is available for some student societies. My view is that this sort of training is not widespread enough. Something that has been often talked about is building up our capacity to deliver more through this training, but it has not really happened. As president I want to make sure this is something that happens. In terms of whether this would be voluntary or compulsory I think personally that it should be made compulsory for college execs, Freshers rep teams and the societies that host large socials. Part of the reason why this is not mandatory now is that we don’t have the capacity to deliver it to all these people but if we train up more students to be able to deliver this training to their peers that would mean we would have the capacity to role out this training to a much wider group of people. After that we could look into making it mandatory for the key target groups and student leaders who are likely to be in these situations that would involve training.

You also talk about working with local businesses to combat harassment, how would you go about doing this?

Obviously this is something that is ambitious and is not necessarily going to be completed by the end of next year. Partly what I envisage is working with the local council, as the council controls things such as licensing for venues. The aim is to get the council to help make these environments safe and introduce new approaches to dealing with complaints and allegations over harassment and make such things conditional on their licenses, which the council has the power to enforce. Even only things such as making CCTV in such venues compulsory would be good. It is really important that not only are college bars safe but also our city is safe as well.

Your final promise is the proposition of a new student opportunities fund for less affluent students. What would be different about this opportunities fund to the maintenance grant and college and university bursaries already on offer?

This would go specifically for people to access opportunities. For example, sports kits can be incredibly expensive along with certain subscription fees for societies. Maintenance grants and bursaries generally help with living costs but actually in Durham we talk a lot about the ‘Durham difference,’ about the high percentage of people doing sport etc. However, for a lot of students that is something that is not possible because what they are concerned with is paying their rent, their accommodation fees and their food and it is actually not possible for them to be able go play a university sport because of the costs. So what this looks at doing is using existing research done by the Students’ Union about the barriers to student opportunities and working with the university to create a system to help people apply for money to make these opportunities more accessible. If Durham wants to widen access to disadvantaged lower economic groups then it needs to acknowledge that they need to provide more support to people in accessing these opportunities.

This new opportunities fund and the new training program are promises that are probably going to involve lavish spending, what will you cut and how will you balance the books?

So you are not planning to cut anything and aiming to get money for this from the university?

So there won’t be any drastic changes in spending?

I don’t think to fulfill my priorities there will be drastic shifts in spending.

So there should be no need for large cuts?

There will be no drastic cuts and no significant changes.

What you have not mentioned in your manifesto is how you would manage your relationship with societies and clubs, is this just not a priority for you?

It is not a priority for me because it is mainly the opportunities officer that would be primarily dealing with societies. Obviously though it is an important part of the role. I have sat on the societies committee this year as a representative for the Political Causes Society so I would definitely want to make sure that under my presidency we will make the SU attractive for societies to affiliate with. I would like to put a focus on enabling societies, instead of being bureaucratic and getting in their way, and providing the support they need.

In one sentence, why should students vote for you?

I think that Durham students should vote for me because I’ve got both the vision and experience to be able to deliver a strong Students’ Union that will stand up for them on the issues that matter most for Durham students.

Why is it important that students vote for a president and engage in student politics?

I think it is important that people vote because ultimately it is there union, they pay into it, and they need to be telling us what they want their union to do and what is important to them. By voting for a president that has certain priorities they can voice that and they can vote for the kind of union they want.

You can vote from the 19th -22nd February on the student election tab on Duo.