Does Durham have an ‘Edifice Complex’? 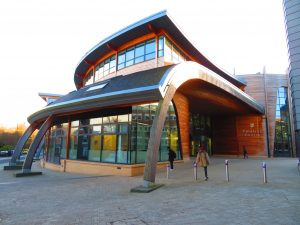 For those who are unaware, the University of Durham has recently moved both John Snow and Stephenson College from Stockton into the city and is building a whole new college (currently named ‘South College’ till a wealthy benefactor can be found.) This will result in Durham having 4000 more students by 2027.

Is expansion always good? The modern thinking at UK universities seems to be ‘expand or die’?

So I would suggest, that we need to think about this and take stock.

What does the word ‘college’ mean? It comes from the Latin ‘collegium’ meaning colleagueship, partnership, hence a body of colleagues in fraternity. Indeed, it is from the word ‘college’ that we get the world ‘colleague’ (first used in 1533). Our first recorded use of the word college is in one of the works of the first translator of the Bible into English. John Wycliffe wrote in 1380 “Criste and his college (ie the Apostles).”

So a ‘college’ is a small group of people who get on and have a shared mission.

What is a university? Well, for a start, it is not an institution that wishes to take over the universe. Or create ‘masters of the universe’ for that matter. The term originally denotes the fact that the students at the University of Paris came from all over Europe (the ‘known universe’ at is were). Then there was the University of Bologna. Here, although the masters (lecturers) were the ones who conferred the diploma of admission to their ‘guild’, they were not then, as the ‘administrators’ are today, the rulers of the university. In fact, there were no endowments, no officials to fill an ‘administration’ building, no board of trustees, no state control (it was great!!) For Bologna was a student university. The professor was, as it were, a learned adventurer, owning some precious manuscripts containing valuable knowledge, and employed by a number of independent gentlemen (the students) to teach the of the secret of that knowledge. The professor deposited a sum of money in advance with a banker, and his fines could be deducted by the banker on order of a student committee, particularly if the academic did not reach a certain point in the course. The students hired, paid and discharged the professor. They got their medieval value for money. In short, the students ‘ruled the roost’ yet academic standards were still maintained at a very high level. For to dilute them would equally dilute the value of the degree that the student was purchasing. A ‘degree’ originally made direct reference to your status in society. Why would any self-respecting student want to ‘dilute’ that? 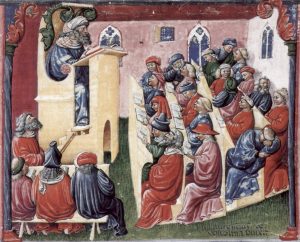 A lecture in the University of Bologna (Circa 1350)

This is all a far cry from today. Today the student is the recipient of a delivery system. The pecking order at a modern university works like this: the student works for the lecturers and the lecturers work for the administration. Hence, in this way, the ‘tail wags the dog.’ My brother-in-law, who works as a senior lecturer in computing at a university in the midlands, when he picks up the phone at his place of employment simply says to the caller ‘Hello, Administrative Support, how can I help you?” That just about sums it up perfectly.

So how did we get here and so fast? Well, others have trod the same ground. When the GI grant was made available after the Second World War to former US servicemen, US Colleges and Universities grew like topsy. It spawned what was referred to as ‘Edifice Complex.’ New buildings, it was thought, added grandeur and majesty. What you did in them was of secondary importance. The main thing was that they were big and imposing and gave the impression of growth and expansion. In other words, a million miles away from the ‘band of brothers’ who lived in a small community and dedicated themselves to the cause of education.

It also led to another expression. It was said that “A college becomes a University when the lecturers no longer remember the names of their students.” A phrase that is well worth bearing in mind.

So how did we get the bug? Well yes, as we all know, there has been an enormous expansion in higher education since 1945. This exploded when the division between the traditional universities and polytechnics disappeared. Then there was a complete free-for-all with former teacher training schools and technical colleges grasping for university status. How many universities are there now: 154. Even Wrexham has one!

However, expansion is not necessarily bad. It can, indeed, be very good. The key thing is how you expand. Now here lies the problem and it was a problem created by ‘The University of Warwick plc’ the current role model for 150 current universities. For Warwick plc came up with the notion that running a university was just like running a fast food chain. Turnover, bums on seats, happy customers recommending the place to their friends was what really mattered. More money coming in, more happy customers etc. etc The trick is to keep the customer satisfied whilst, using the usual practices of business, making the actual product cheaper and cheaper all the time. That way you maximise profit. Yet, does that not mean that you might make the customer less happy?

Not if you give them a better and better status degree. One of the strings to my bow is that I have been an external examiner at five universities in the UK. I was at one in Leicester and saw the number of firsts on one course go from 3 the previous year to 23 the year after. Brighter students? No. The administration (the ones in charge remember) had changed the assessment regime. I attended another last year in which almost one third of a year gained ‘firsts.’ On both occasions I expressed my views on the matter in no uncertain terms.

The response I got: “you might be right, but in the current market, we have to do what our competitors (sic) are doing.”

My plea is this. Durham: Don’t be Warwick plc. Don’t even try to Warwick plc. Yes, think of the future and think of the well-being of your students. Yet keep to your own successful, tried and tested niche. Cling to the idea of ‘small is beautiful.’ Cleave to the idea of that band of brothers (and sisters), who know each other and are after personal development in a small friendly cultured environment is best. Buck the trend and find your own way. Hold true to your standards and your strengths. That way, although the others will fall by the wayside, you will keep your soul in an increasingly soulless higher education environment.