College fee rises: why they are unacceptable 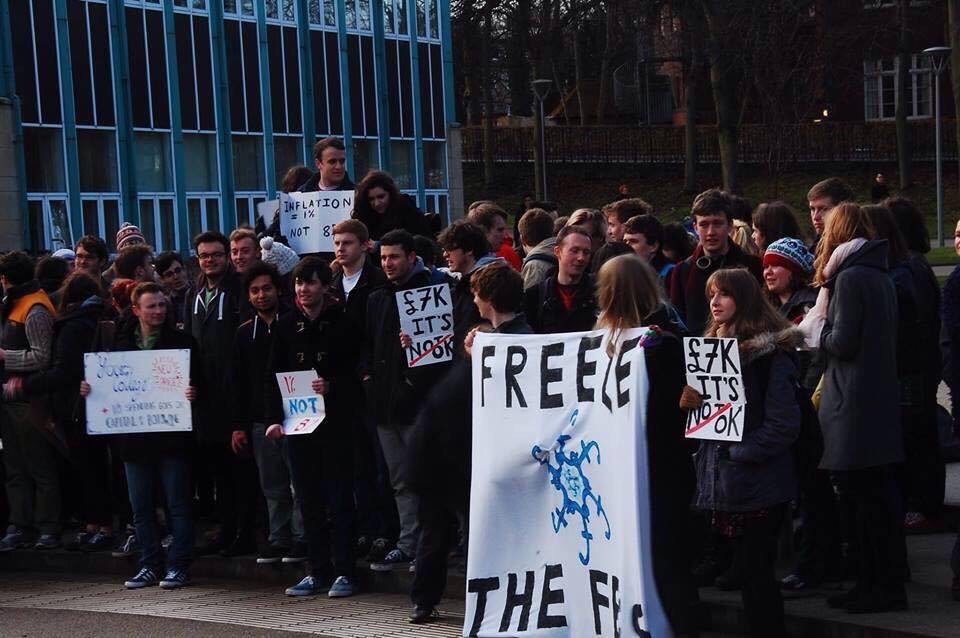 Last week, Durham announced that it couldn’t give a toss about accessible education. It told students that its accommodation fees would once again be rising, this time to over £7000 for a standard, catered room in the next academic year, and as a brief afterthought added that international fees would be rising to almost £21,000.

To put this into perspective, accommodation has risen by over 28% in the past four years. Fees are now £2000 more than Oxford University and almost £1000 more than every other British University outside of London.

The Tory government’s scrapping of the maintenance grant in July makes this all the more difficult to stomach. Students from the lowest income households will now only just be able to cover accommodation costs with a loan. Money, which they will have to pay back, will now barely cover essentials like course books, toiletries and clothes. The average maintenance loan for a middle income family in the £40,000 region would leave them having to scrape together nearly £1000 extra to cover accommodation costs. Moreover, the Durham Grant (offered to students with household incomes below £25,000), has been cut by almost a third in recent years.

What’s more, these university accommodation increases have a knock-on effect upon private student housing in the rest of Durham. It gives landlords and estate agents a fully justified excuse to rack up their rents in accordance.

I speak for many students when I say that I fought for a place here. I knew what a brilliant place Durham is and what an opportunity it would be to study here. I had access to a student grant, no longer available, which helped me to afford me first year. It breaks my heart to think that no matter how hard future students like myself work, what grades they achieve and what circumstantial odds they may defy to gain a place – money and profit will slam the door in their face.

Schemes like the Sutton Trust project and others, which aim at widening access to institutions like Durham for poorer students are a twisted and cruel hypocrisy. ‘Outreach’ schemes become somewhat devoid of meaning when the kidsthey ‘reach out’ too will not be able to afford the prices, even if they make the grade.

As for the rise in international fees, exploitation is the only way it can be described. Durham have broken their promise in June this year to freeze international fees for 2016–17. The University knows that students from across the globe are desperate for a British education and they squeeze this desperation for every penny its worth. With no cap set by the government, international students are at the mercy of institutions.

There has been no attempt thus far by the University to justify or explain these rises. A freedom of Information Request by Durham’s student newspaper Palatinate established earlier this year that the university has invested some £35 million in fossil fuels, and I shudder at the thought of what else the fees are being spent on, because let’s face it, it’s not all investment in students.

The behaviour of Durham can be seen as part wider movement to corporatise higher education. Bit by bit, the government is relinquishing all regulation of and support of higher education. Stripping higher education funding, slashing maintenance grants and introducing schemes like the Teaching Excellence Framework (TEF) which will soon give Russell Group universities like Durham the opportunity to charge upward of £9000 per year for tuition, to ‘reflect the quality of teaching’. These measures encourage universities like Durham to behave as any other cut-throat business,putting profit before people, and capital above ethics.

In a recent student consultation with the newly appointed Vice Chancellor, he set out the Durham’s commitment to ‘equality and diversity’. He might as well have promised every undergraduate a Ferrari.

Soon enough, Durham will be a rich person’s club: elitist in the most profane sense of the word. A small minority of the population will be represented here and the diversity, colour ad vibrancy that a student body should represent will beobliterated.

Don’t we live in an age of opportunity, with possibilities greater than those of our parents and grandparents? I used to think so. It is frankly scandalous that a British University today, so celebrated for its academic reputation, is able to so unashamedly place money before above merit, with no excuse, apology or justification. Durham is currently the only University outside of London to be charging such rates, but my fear is that in time, other universities will follow.

We must fight this, all of us. University Education is a privilege, but one based on academic ability, not the ability to pay. In recent weeks, students at University College London have stood up to their university and secured a rent reduction, now it is the turn of Durham students. A petition asking for a two year rent freeze has already gathered almost 1000 signatures and a mock ‘funeral’ for accessible education will be staged on Tuesday 8th December. I hope the University is ready to respond.