Clean Hands: The Moral Bankruptcy of the ‘Peace’ Movement and the Fight Against ISIS 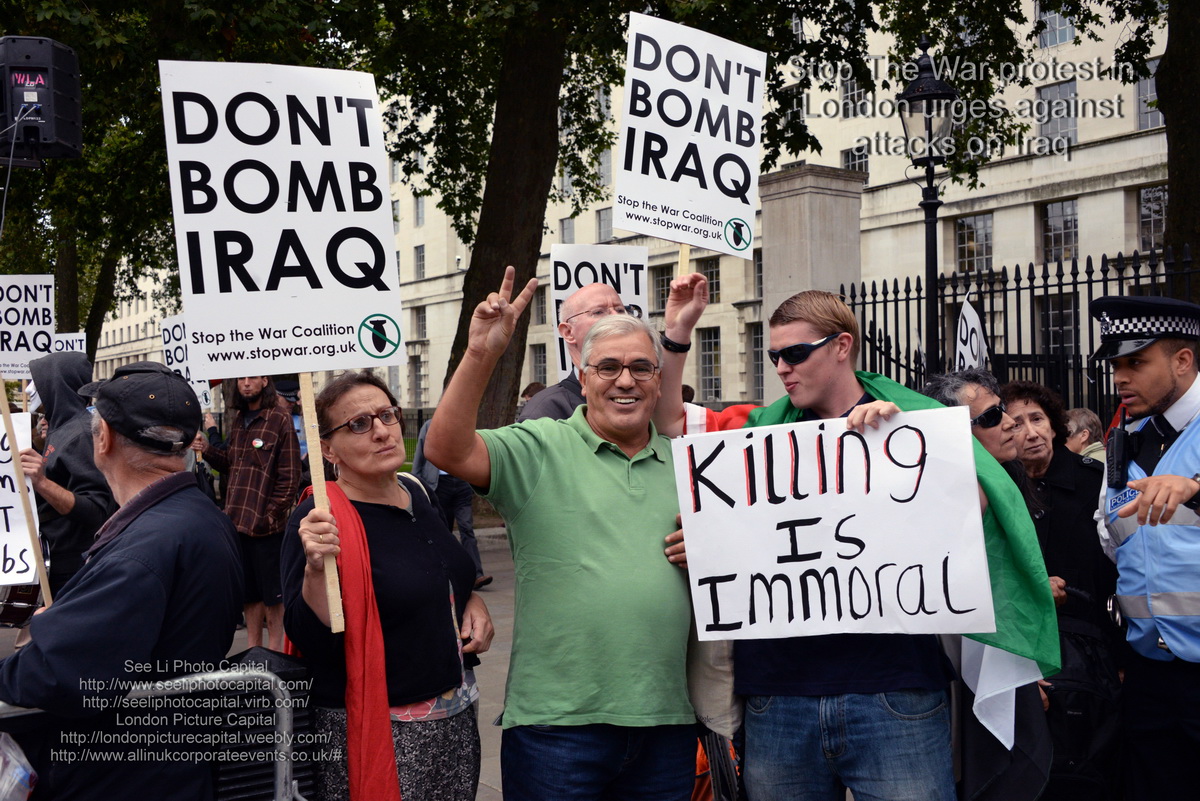 A spectre is haunting Europe,
So pacifists unite!
With courage we can overcome
The urge to stand and fight.

The veil that cloaks us from the East,
That comes from ages dark,
Is one we can accommodate
Within our gentle hearts.

Let’s learn from our George Lansbury!
“One of the great men of our time”;
A pacifist who’d oft frequent
The Reichstag and the Rhine.

Our finest hour when Neville stood
In Munich, pen in hand,
To give the Führer a gift of peace:
The Czech’s Sudetenland.

And now again, for “peace for our time”
Let’s bow to their demands;
We’ll build for them a Caliphate,
And throw in Kurdistan.

Some “quarrel” in the Middle East
Is naught to do with us;
Why should it be our blood that dries
On foreign desert dust?

They’ll manage fine all on their own;
No need to intervene
In countries “faraway” from here;
From England’s pastures green.

Of course it’s hard to have to watch
The slaughter on our screens,
But won’t we all sleep well tonight
With hands we know are clean.The satirical poem above, if successful in its intent, exposes the moral bankruptcy of pacifism.

The gravamen of my own position is this: in our current political discourse, the mere profession of an anti-war stance is, for most people, enough to avoid the onerous task of moral justification. This lazy attempt to hide behind a wall of popular consensus must be challenged.

Of those who align themselves with the so-called ‘anti-war’ movement, very serious questions need to be asked. Why, for example, in February 2003, did so many people protest to keep in power a savage dictator who managed to combine, for thirty years, the worst elements of Stalinism and Mafia gangsterism? A man who attempted genocide on two populations; who considered torture to be an end and not a means; and who was responsible for the slaughter of over 1.4 million Iraqi citizens.

To protest against the removal of Saddam Hussein was to support immunity for, and the continuation of, these horrendous crimes. Yet those who protested in 2003 went largely unchallenged as they waved their silly and unthinking “not in my name” placards.

The impression should not be formed that I do not expect the same standard of moral justification from those who are ‘pro-war’. To the contrary, the decision not to recognize sovereignty; to endanger lives; and to risk the upheaval of an entire political framework, is an incredibly serious one that demands the most convincing moral account.

In confronting the prevailing pacifist mentality, I aim simply to expose this stark discrepancy in moral accountability, and to dispel the dangerous idea that there can exist such a thing as an a priori moral position.

The record of the peace movement has been a shameful one.

If the pro-Nazi-accommodationists, such as George Lansbury, had been successful, Britain might have been totally unprepared for the inevitable confrontation to come; just as the Soviet Union very nearly was after Germany broke the Molotov-Ribbentrop Pact in June 1941. To demonstrate how real that possibility was, in 1935, the Liberal Party had actually proposed strict controls on the manufacture of British armaments (this being the same year that Hitler announced rearmament and Mussolini invaded Abyssinia).Other great pacifists, such as Mahatma Gandhi, openly welcomed annihilation. Addressing the British people, he said: “I want you to fight Nazism without arms… if these gentlemen choose to occupy your homes… vacate them. If they do not give you free passage… allow yourself, man, women and child, to be slaughtered.”

To jump forward a generation: we now know, thanks to the writings of Lt. General Roméo Dallaire, that the United Nations were informed, months before April 1994, of exactly what was being planned by Hutu extremists in Africa’s great lakes region. Let’s hope that Kofi Annan and the rest of the staunch non-interventionists can live with the death of over 800,000 Rwandans on their conscience; I get the impression that they can.

And now to the present day, where the anti-war figureheads, such as George Galloway, turn out to be, not so much against war, but on the other side. In 1994, his whiskered face bowed before Saddam Hussein, Galloway declared: “Sir, I salute your courage, your strength and your indefatigability… I want you to know that we are with you until victory.” After Saddam’s demise, Galloway wasted little time in his search for a new tyrannical fatherland, finding it in the form of Assad’s Syria, hailing it: “the last castle of… Arab dignity and… Arab rights”.

Even after having surveyed the embarrassing record of the peace movement (not to mention the fiascos in Bosnia and Darfur), it was still with complete incredulity that I observed their response to the unfolding crisis last August.

On August 3, ISIS militants attacked the town of Sinjar in Northwestern Iraq, executing and raping thousands as they went. Most of the Yazidi population who lived there – at least 40,000 – managed to flee, retreating up Mount Sinjar located directly to the North. The mountain range, however, was quickly surrounded by ISIS militants; leaving the Yazidis besieged. The response from the US, who proposed targeted airstrikes on ISIS so as to allow the Yazidis safe passage, was obvious and necessary.

Yet, whilst the Yazidis sat contemplating their ‘choice’ between death by dehydration or beheading, it was common, was it not, to hear and read such sententious remarks as: “what good is dropping a load of bombs on ISIS really going to do?” (This was said, I assure the reader, without a hint of rhetorical tone).It was at this point that the verdict of the peace movement finally severed all ties with reality. That they were willing to sacrifice the lives of 40,000 innocent people to keep their own hands clean was surely, amid fierce competition, their lowest point.

The raison d’être of the peace movement has become indistinguishable from a policy of anti-Westernism. Much of this Western self-hatred comes from the old leftist belief that a capitalist society could never engage in purely moralistic actions. There is also the theory that the essential Western value of self-criticism has been pushed to its extreme and mutated into a type of self-abasement, verging on masochism. All of this, coupled with a vicarious guilt over past colonial adventures, makes for quite a concoction that the pacifists appear to have downed in one.

None of these, arguably legitimate grievances, however, provides any moral justification for why civilians should now be left to die, in their thousands, at the hands of an Islamic fascist and imperialist organization.

“Bad men”, said John Stuart Mill, “need nothing more to compass their ends, than that good men should look on and do nothing.”

It’s about time we get real and realize that the confrontation with theocratic fascism is an inevitable one. Those who believe that this conflict will disappear if ignored are irresponsible as well as ahistorical. Peace is not a process; it is an outcome; it requires struggle.

History, I am certain, will trace the blood back to the hands, not of those who were willing to get them dirty, but to those who sought to keep them clean.