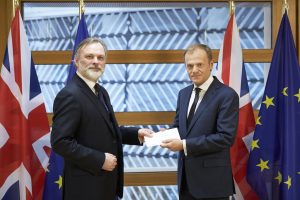 Last week, much to my shock and horror, Dr. Liam Fox, our Secretary of State for International Trade, confessed that in the last two years our progress on international trade deals has been as follows: One almost completed deal with Switzerland. That was it.

Yes, the clear (mandated) ‘rule’ from the people was that we withdraw from the European Union. Something that I have always wanted. Yet this was predicated on free trade deals with the rest of the world. That was the Brexit I voted for. What has become increasingly apparent over the past week is that HM Government have put ‘all their eggs in one basket.’ That same ‘basket’ has been decisively (and rightly) rejected by our elected representatives as producing the worst of all worlds. Hardly surprising really given the different bargaining positions of the two sides and the intractable problem of Northern Ireland.

As things stand on March 29th 2019 we are going to ‘drop’ into WTO rules. Now this is not by any means a disaster as such. But it is certainly not the network of free-trade deals that we were promised and hoped were being forged by Dr. Fox. Trading under WTO rules will mean that we will survive, but not thrive. Thrive as our neighbours will do on the continent. It means that a generation or so of Britons will suffer the type of managed decline Britain witnessed in the ‘70’s. It will mean a return to a pre-Thatcher era. The only person that this will make happy is Jeremy Corbyn.

In any case, two years after withdrawal I imagine we would have another referendum on re-joining the EU. We can probably guess (given that it would be held during the throws of economic readjustment) the way that would go.

Since the ‘basket has been dropped’ by our politicians there have been all sorts of backroom talks (so I hear) throughout Westminster. The ’Masters of the Universe’ as Tom Wolfe used to call them, are pulling every string possible. Principle is one thing; money is quite another. Just as war is too serious to be left to the generals; the economy is far too serious to be left to the politicians. ‘The Gnomes of Zurich’ (and the City) will stop the world’s fifth largest economy falling into an abyss and taking their money with them. I have little doubt that a coalition of the centre are now being leaned on to come to an amicable understanding. This will leave Mr. Corbyn – and possibly even Mrs May herself – as ‘Billy-no-mates’ unless they tag along.

So just imagine this.

Imagine if Germany – or the Commission – made the following ‘soundings.’ We all know that the referendum of 2016 was about the question (ultimately) of free movement of peoples. What if there were promises to suspend free movement of persons vis-à-vis the UK. Perhaps a limitation – for a time – on the jurisdiction of the ECJ. Perhaps even a lowering of the budget contribution. In return the UK withdrew its withdrawal submission under Article 50.

The UK could, at any time, re-submit under Article 50. Equally, the EU could hope that like our opt-out at Maastricht over the minimum wage we might opt back in to free movement at a later stage when it suited our needs.

Would it be a betrayal of the people? The answer to that is simple. They have already been betrayed.

Editors Note: After reading Horace’s article I must admit that I agree with him on much of what he says, especially his thoughts on us falling back on WTO rules. However, I feel that his beliefs as to what might happen seem overly optimistic. For one thing I cannot imagine the EU compromising on freedom of movement, even as a temporary solution. Considering the grumblings of countries in eastern Europe about wanting more restrictions on movement, I seriously doubt that the EU would want to compromise on the issue for fear of giving those countries ideas. Despite Britain certainly being important for the EU I think most of the EU, most importantly France and Germany, have got used to the idea of us leaving. The erratic behaviour of Poland, Hungary and even Italy now is seen by them as a greater threat to the European project than Brexit. Thus, I cannot imagine them making concessions on freedom of movement, something vital for any acceptable compromise for Britain to remain in the EU.