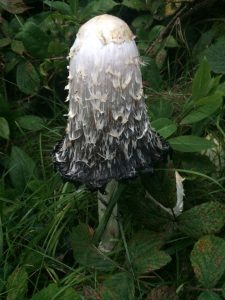 Slowly but surely, corporations and governments are turning toward solar and wind energy to reduce carbon emissions in the fight against Climate Change. However, mushrooms could also be an investment worth exploring.

Researchers at Stevens Institute of Technology have designed what they’re calling a Bionic Mushroom, which they claim will act as a producer of electricity.

In November, the Stevens Institute reported that they ‘have taken an ordinary white button mushroom from the grocery store and made it bionic, supercharging it with 3D-printed clusters of cyanobacteria that generates electricity and swirls of graphene nanoribbons that control the current.’

Jay Shankar Singh, Arun Kumar, Amar N. Rai, and Devandra P. Singh of the National Center for Biotechnology Information (NCBI) report that cyanobacteria, also known as blue-green algae, is beneficial toward biofuels, as a food supplement, can act as a waste water treatment, an alternative energy source, and as a means of breaking down and consuming pollutants—the process of bioremediation. This report was published in 2016, and it is because of these attributes that the researchers at Stevens Institute chose to use cyanobacteria in their bionic mushroom. 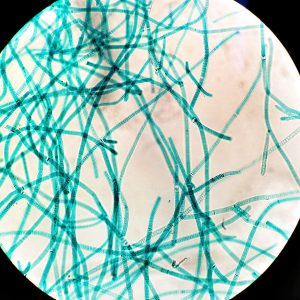 ‘Cyanobacteria’s ability to produce electricity is well known in bioengineering circles. However, researchers have been limited in using these microbes in bioengineered systems because cyanobacteria do not survive long on artificial bio-compatible surfaces.’

To solve this problem, researchers Manu Mannoor and Sudeep Joshi posited that a mushroom would provide the nutrients and environment the blue-green algae would need in order to survive. Joshi says:

‘The mushrooms essentially serve as a suitable environmental substrate with advanced functionality of nourishing the energy producing cyanobacteria. We showed for the first time that a hybrid system can incorporate an artificial collaboration, or engineered symbiosis, between two different microbiological kingdoms.’

Thanks to 3D printing technology, they were able to create an ‘ink’ with graphene nanoribbons, which allowed for the collection of electrical currents across the mushroom cap before laying down another ink infused with the blue-green algae which produced the electricity. Where the inks intersected, ‘electrons could transfer through the outer membranes of the cyanobacteria to the conductive network of graphene nanoribbons. Shining a light on the mushrooms activated cyanobacterial photosynthesis, generating a photocurrent.’ 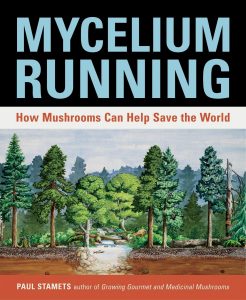 Electricity isn’t the only way that mushrooms have been shown to be beneficial to the environment. One of the world’s leading mycologists, Paul Stamets, has long been preaching the abilities of mycelium, the ‘internet’ of the forest.

In his 2008 TEDtalk, he explores ‘Six Ways Mushrooms Can Save the World’, indicating that mycelium can change pollutants in soil into fungal sugars. An experiment was done in Bellingham, WA in which a pile of soil was soaked with diesel and covered with a tarp and mushrooms mycelium for six weeks. The mycelium broke down the carbon-hydrogen bonds and created nourishment from the toxins, and replenished a healthy patch of soil which began to flourish with other life such as plants and even some small animals creating nests. ‘PAH’s – the aromatic hydrocarbons, went from 10,000 parts per million to less than 200 in eight weeks,’ says Stamets. PAH’s are Polycyclic Aromatic Hydrocarbons, ‘a group of more than 100 chemicals…released from burning coal, oil, gasoline, trash, tobacco, and wood,’ according to Toxtown of the National Institute of Health website.

While these are just two exciting examples of the ways that mushrooms/mycelium and blue-green algae can work toward a sustainable world, governments have yet to invest in mass mycelium clean-up projects. By fusing technology and the natural world, as Mannoor and Joshi have, with the creativity of human invention as Stamets has, we can find solutions to our climate and global challenges.

To learn more about mushrooms and their environmental benefits, here are a few resources:

‘The Cultivation and Environmental Impact of Mushrooms’ by Shu Ting Chang and Solomon P. Wasser, published on Oxford Research Encyclopedia

‘Mushrooms as a Product and Their Role in Mycoremediation’ by Shweta Kulshreshtha, Napu Mathur, and Pradeep Bhatnagar

Nicola Thompson is one of the editors for the Environement section of the Bubble and a student of Durham University studying English and Philosophy. She is also a staff writer for Carpe Nocturn Magazine, has several short stories published in anthologies, and was shortlisted for the 2018 H. G. Wells Short Story Competition.