London Fashion Week is one of the biggest fashion events of the year. As part of Fashion Month this week exhibits the works of the largest high fashion designers the UK has to offer. Each season the shows are bigger and better from Burberry to Victoria Beckham using their runways as an exhibit of what is sure to be the next big trend of the season. Whether this be a colour or silhouette, Fashion Week is all about something new and exciting. This push for brand new products feeds what has now become our consumerist society, constantly needing the next new popular piece. From the high fashion runway to the high street, Fashion Week shows want to catch the imagination of a new customer and plant a seed of what they could look like if only they could get their hands on this new product. Although are they really inspiring creative society, or are they promoting a consumerist society which is destroying the environment?

Extinction Rebellion took to the streets during London Fashion Week to question the motives of the fashion world. Their campaign has proven that governments are being increasing inactive in dealing with the climate change issues that are regularly damaging our world as we know it. The rebellion argues that not only is the world being damaged to increasing rates but that we are reaching a tipping point of no return; the result being extinction. This harsh conclusion has been criticised for provoking fear mongering tactics and scaring children, but without their recognition of this new harsh reality nothing would be done. This rebellion is arguably the first widespread use of direct action towards climate change used since the phenomenon was first recognised. Gone are the days of ignorance, not knowing what the consequences to our actions are. Instead the rebellion has called for collective action to make larger changes to prevent such catastrophes as those that we have seen this summer in the Amazon rainforest. Extinction Rebellion has called for everyone, including governments all over the globe, not to sit back and relax while our world is being destroyed, but instead take action against our consumerist society and change our morals. 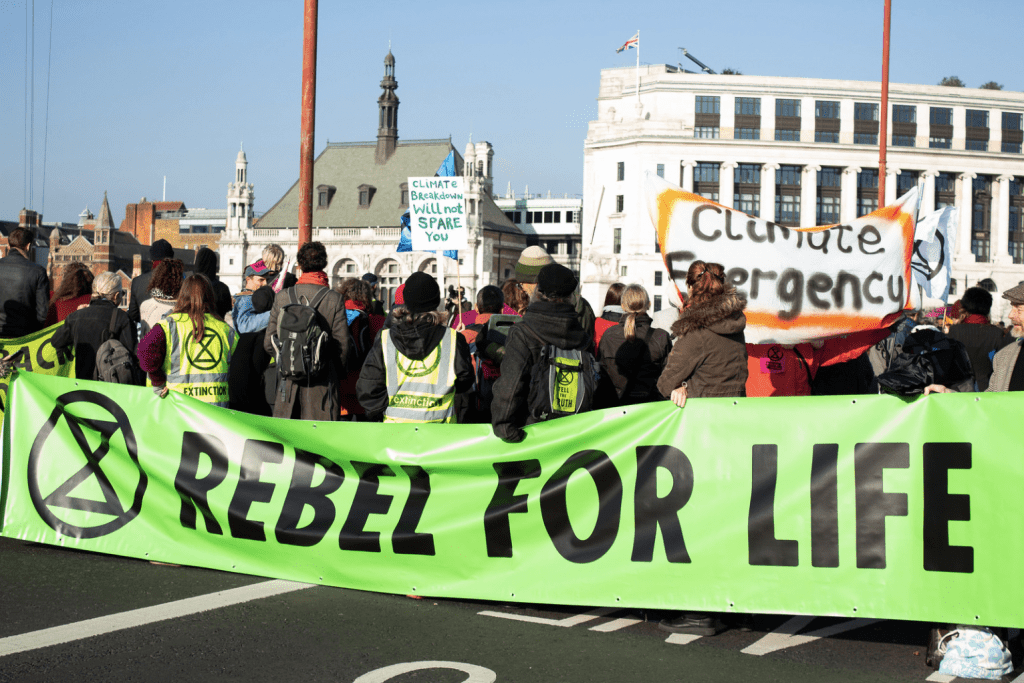 This has led to what Extinction Rebellion called a funeral march during London Fashion Week. Dressed in black the march ended along the Strand, which is a hub for the fashion shows in London. The funeral marked the end of London Fashion Week, till another season would resurrect it. The aim of the march was to signal the need for the end to fast fashion. All of the shows at London Fashion Week signalled the birth of new designs and products to buy, but none considered the waste of what would now be last season. What happens to the out of fashion products? They are discarded for something new and exciting. Why keep an old design when a new better one has come along? Hence, when last year it was discovered that high fashion brands would burn unsold bags and clothes worth millions to protect the label from being sold cheaply, this seemingly fuelled Extinction Rebellion’s aim to combat our wasteful society. This example just shows the lack of respect for the environment by those who prioritise the importance of a label.

Extinction Rebellion understands the importance of not just high politics at government level but also the daily politics evident in the world of fashion. Fashion itself is a daily political decision. Whether this be wearing a political slogan, such as the Make America Great Again red baseball cap, or whether it is the choice of using fast fashion brands, they are all political choices. The funeral march at London Fashion Week has highlighted how fashion is part of the environmental politics of today. Waste can be seen not just in plastic and paper but also cotton and polyester. All these materials require energy to produce, and as a result generating waste even in its creation. Therefore, why add to the further waste which can be avoided by alternatives to fast fashion. Whether it be upcycling or recycling this has to be recognised as a viable alternative, and one that will save our environment. High fashion brands have already shown they can change with the likes of Prada no longer using real fur, but this is just the first step.

As a consumer you have the power to change what is produced for your needs. Only the taste of the consumer can change what is produced. Extinction Rebellion, like many others, wants the death of fast fashion to occur, but it is down to the everyday customer to enforce this. Brands produce new clothes because of the demand for them. But what if they were forced to make changes, such as not using real fur due to the decrease in people buying it? As a consumer only you have the power to make brands more conscious of what they produce. Extinction Rebellion has raised awareness through the burial of London Fashion Week, but now it is up to you, the consumer of fashion, whether it be luxury brands or high street shops, to change how you shop. Buy consciously for the better not for the brands.