On Media Representations of non-Heterosexual men, and why it isn’t Good Enough 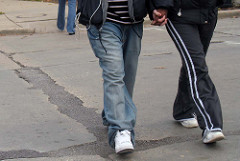 When characters in popular shows are presented in such a one-dimensional way, it acts to perpetuate stereotypical understandings of minority groups and often acts to reinforce their stigmatisation from society, based on these arbitrarily decided characteristics. Not all non-heterosexual men act the same, or are interested in the same things. They are a diverse set of people, just like any other group, and generalising serves to group all non-heterosexual men as a homogenous group. This is why many people are often upset and angered by such basic representations.

Better representation of non-heterosexual men in popular media, however, is improving. Take the Netflix series Sex Education as an example. The character of Eric Effoing being a non-heterosexual man has a typical character trajectory, with development of the individual person going alongside his sexuality, which is commented on, but not in a one-dimensional way. Issues are tackled with reference to real world experiences. He isn’t presented simply as a stereotypical trope of non-heterosexual men, and this should be applauded and praised. Representations of such men are few and far between though in higher budget productions. There are only few exceptions existing to this claim, such as Moonlight being the first film with an all black cast, and the first LGBTQ+ film, to win an Oscar for Best Picture in 2016.

From my own experience, it has not only been hard to find films with LGBTQ+ characters that are represented well and as more than one-dimensional characters, but it has been hard to find such representations in lead characters of films more specifically. There are notable examples though. The Way He Looks (2014) is a romantic coming of age story following two young Brazilian men, one of whom is blind. I Killed My Mother (2009) is a film about Hubert, a homosexual man, and his complex relationship with his mother. This film received a seven minute standing ovation at Cannes film festival after its release. Naz and Maalik (2015) explores the intersecting identities of being young, black, gay, and Muslim in New York in a developed and complex way. We need more films that do not just throw in characters to fill a diversity quota, or that play on antiquated stereotypes of non-hetersexual men. We need better representation, so that being non-heterosexual becomes normalised. Although progress has been made, it is by no means complete.

Media portrayals of minority groups have a long way to go, but it is only through popular media that we can act to normalise experience and perceptions of certain identities. At the moment, for non-heterosexual men and many other groups, representation simply isn’t good enough. For too long, it has not been seen as profitable to feature LGBTQ+ characters, but as films like Moonlight have shown it is something that is desperately needed and desired by the public.