Women’s bodies have always been a source of debate and discussion. Now, in modern society the problems embedded in the discussion around women’s bodies sparks perpetual debates between those who want women to stop being scrutinised, judged and sexualised simply for existing in a space and those whose judgment is still clouded by patriarchal moral ideals.

Not even a month ago on the 14th of September a women’s liberation movement shook the grounds of french high-schools. It came along with the hashtags #14Septembre and #balancetonbahut (denounce your school). Students took it upon themselves, regardless of gender identity, to come to school wearing what the schools and the government deem as “inappropriate” outfits. That means outfits of students who identify as women get sent home regularly on the basis of “distracting boys”. France doesn’t have a dress code as specific as some places in the United State for example, but they do seem to be waging a war against short skirts, shorts, low cut tops,not wearing a bra or wearing a crop top or even a form of hair covering. Young girls are sick, and rightfully so, of the concept of their bodies being potentially distracting being put above their education. The very concept of that is morally wrong and sexualises not only the bodies of women outside of an intimate context but most of all sexualises the bodies of minors. I know from experience as a woman having grown up in France that schools would rather excuse pedocriminal behaviour from its teachers and take actions against students, than put the adults back into their rightful place.

Some of the students participating in the protest got sent home but some others successfully made it into their schools. The french government’s response about the movement was more than disappointing: Emmanuel Macron calling for students to be “reasonable” rather than taking action for a positive change. The minister of Education even mentioned the concept of a “Republican outfit” which would comprise a certain idea of “correctness” and “sobriety”. But what does that entail? According to an article on theconversation.com, a republican outfit, in theory would be an outfit that wouldn’t go against the law, for example covering your face or being naked in public spaces. But really here, the undertone is morality, a morality which in the end demonises women and young girls and promotes rape culture through victim blaming and teaching women that they are defined by their bodies before anything else. That instead of teaching boys women are not objects, reinforces the idea that they are. 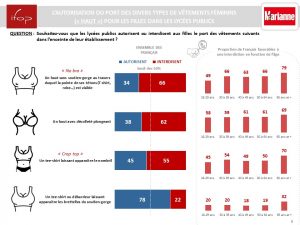 Image: IFOP via Twitter (In blue the percentage of people who allow the outfit, in red those who forbid it. From top to bottom: no bra, deep neckline, crop top, top allowing bra straps to show) outhttps://twitter.com/IfopOpinion/status/1310865176506269701/photo/1

On the 25th of september, an organisation called IFOP published a poll about what the general public deemed correct for young women to wear in high school. The only “appropriate” choice from the four available, according to the people, is wearing a top which could show bra straps. A low cut top, a shirt with no bra, and a crop top were all deemed inappropriate by as much as more than ½ people. The reaction was of course very loud on social media in response to the poll and young people were and still are angry. Some are even going to take the Republic’s symbol Marianne, depicted having her breasts out in the iconic painting Liberty Leading the People, as a satiric example as to what a republican outfit should really be like. Another reaction sparked debate when philosopher Alain Finkielkraut, who is 71 years old, said on live television that women’s outfits are “distracting” and that he himself is “distracted” when seeing underage girls with their belly button showing and showed support towards the Minister of Education’s concept of “Republican Outfit” and that, mentioning McDonald’s motto: “Come as you are”, school is not like McDonald’s. 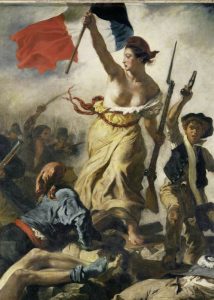 Liberty Leading the People by Eugène Delacroix 1830, The Louvres Paris along with the caption “My Republican outfit for tomorrow, the skirt is long enough it should be fine” via Twitter: https://twitter.com/Cecile_Suel/status/1307969195754360833/photo/1

Policing women’s bodies is an issue all countries face, be it in different ways. We as a society should aim towards educating people not to use women’s bodies as political tools or to make a point on morality. We have to work towards women being able to express themselves however they see fit whether modestly or not because our bodies shouldn’t be sexualised out of intimate situations and we should not be looked down upon simply for existing. That is what an ideal world would look like but unfortunately we obviously still have a very long way to go.