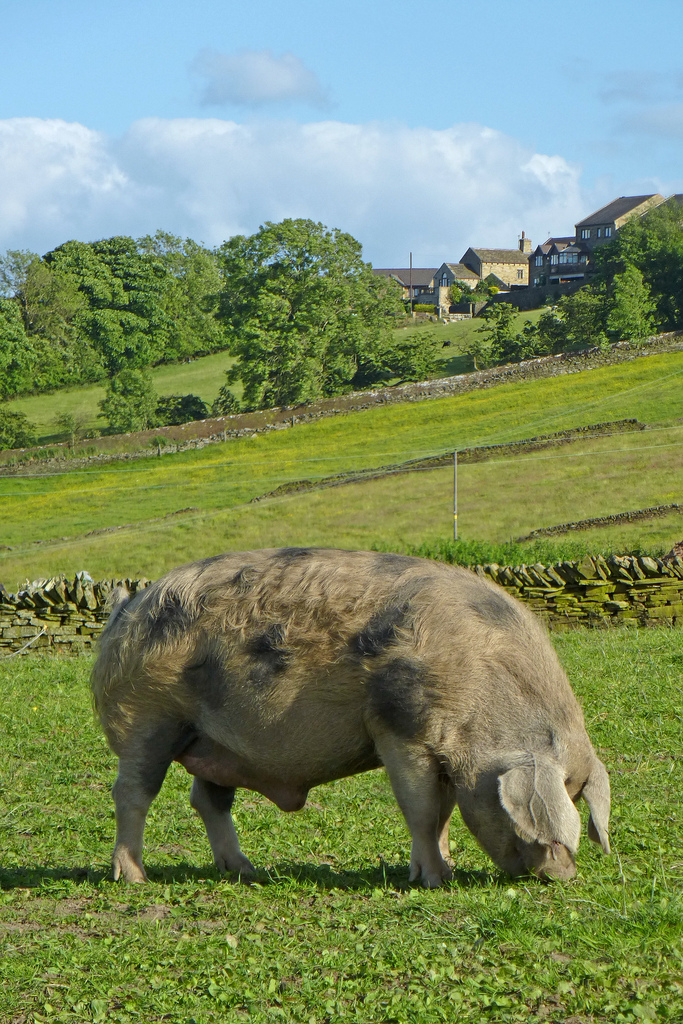 If there is one problem that is curling tails in the pig industry, it has to be ‘The Pig Idea.’ Headed by food waste expert Tristram Stuart, 2005 ‘Masterchef’ winner Thomasina Miers and the ‘Feed the 5000’ campaign, ‘The Pig Idea’ seeks to restore pigswill’s once well-established place in the trough.

Throughout the history of rearing pigs and well into the twentieth century, humans have been feeding their pigs leftover scraps from the kitchen and this mix of all the wasted culinary goodness is what is known as pigswill. Pigswill became well and truly established in the pigs’ diet during the First World War when food shortages led to a ban on feeding grains to pigs, which were fit for human consumption. However, in 2014 the lining of streets with pig bins, in which local residents donated their waste food, is now a distant memory and is one type of bin that is absent from the plethora of recycling and waste boxes that furnish our doorsteps.

So why was pigswill removed from UK pigs’ diet? Since 2001 there has been a nationwide ban on feeding household- and catering-sourced pigswill to pigs: a legislation that was implemented in response of the foot and mouth outbreaks that caused huge devastation to British farming. At the time, it was believed that the pathogens that caused the disease worked their way into UK farms when illegal meat, which was contaminated with the disease, was redirected into pigswill and failed to be adequately treated.

Each year in the UK, 15 million tonnes of food is sent to the landfill. The 1 billion people who have to go hungry in this world could be fed on less than a quarter of the food carelessly chucked away by UK and US citizens. 8.3 hectares would be needed just to produce the meat and dairy products that UK homeowners and US homeowners, shopkeepers and restaurateurs generously donate to their bin collectors. Whether or not this really was the cause of the foot and mouth disease outbreak (there remains some debate as to whether pigswill can be held responsible), it seems that, faced with such horrifying statistics at a time when there is growing realisation of the food and environmental insecurity looming in the foreseeable future, is it not time for a review of this once embraced animal food source?

The advantages of ‘The Pig Idea’ are manifold. As is the case in most agricultural sectors, stiff competition from international food suppliers has left the British pig farming industry in a shaky place and many farmers perform a constant balancing act on the profit-loss boundary. The greatest feat with which they have to contend is the extortionate cost of imported feed, which amounts to 60–75% of their expenditure. By feeding pigs with readily available food waste, these costs could be drastically reduced and pig farmers could be given the boost needed to secure their place in the global market. Moreover, with additional jobs created in the eco-feed industry, the potential for pork prices to be reduced and for catering companies to sell their waste produce rather than pay for its collection, ‘The Pig Idea’ has much to offer to the UK economy. On a global scale, legalisation of pigswill would also reap huge rewards in terms of feeding the exponentially growing population. It has been estimated that, should pigs be fed on our leftovers, an additional three billion mouths could be fed on the grain that would have been used for the same purpose. While scientists and politicians debate the ethics and controversies of GM vegetables or industrial-scale, monoculture farms, they are sitting on a national bank of food waste that could be put to good use.

In addition, it is vital that we remember the enormous environmental costs that are paid to produce the commercial grain that is generally fed to pigs. Acre after acre of breathtaking South American rainforest is being stripped away in favour of acre after acre of diversity-quashing soya plantation. The Pandora’s box of carbon dioxide that this unleashes and the horrific damage soya plantations cause to the ecosystem make this practice completely unsustainable and if ‘The Pig Idea’ can do anything to mitigate this destruction, should it not be given serious consideration?

I cannot deny that ‘The Pig Idea’ is far from flawless and the arguments against it are indeed compelling. One half of the argument is that the meat produced from pigswill-fed pigs is of a lower quality and may be oily, greasy or spicy depending on the pigswill contents. Furthermore it is feared that the public will be put off by the idea of recycling meat in our food chain, which the National Pig Association has described as ‘cannibalistic.’ The other half of the argument concerns the potential for disease outbreaks to occur. Foot and mouth, African swine fever, classical swine fever and other exotic diseases could all work their way through the farm gate if contaminated meats were to be fed to pigs. After all, it only takes one farmer to fail to meet the standards of heat treatment required to kill off any pathogens within the pigswill and there could be a repeat of the horrors of the 2001 foot and mouth disease outbreak: a time that no one would wish to relive. Moreover, any British disease outbreak would push many more pig farmers into bankruptcy as British pork would lose its reputation as a premium quality product in the international market.

While the taste of pigswill-fed pork is subjective and can even be seen to lead to enhanced flavours as pigs are fed with a more natural and varied diet, the risk of disease is highly problematic to cause. In theory, carefully monitored heat treatment facilities and stringent regulation and inspection of pigswill should eliminate any risk of disease. However, the Foot and mouth and mad cow disease outbreaks, along with the fresh memory of the horse meat scandal, serve to emphasise the lack of traceability and mismanagement within the food network. If we can’t trust food providers to include beef in a Findus lasagne, how can we possibly presume that properly-sourced pigswill would be fed to our pigs?

Despite these important concerns, I find myself won over by ‘The Pig Idea’. It seems that, rather than criticising the well-intentioned pigswill campaign, these criticisms should, in fact, be diverted to the infrastructure and authorities that are responsible for providing safe, well-regulated food. ‘The Pig Idea’ offers a solution to numerous socio-economic and environmental issues that are threatening our future prospects, both as a nation and as a planet, and the obstacles that are holding it back are the fault of the poor governance that has characterised the UK food market in the past rather than the idea itself. Meanwhile, pigs in Japan, South Korea, China and some US states are already safely being brought up on a diet of household and catering waste. It’s time the UK upped its game.