Changing times: the shadows of a new cold war

As the shadows of conflict re-emerge, how much—if anything—can the cold war teach us about the future?

I. THE PARADOX OF THE BERLIN WALL

In Berlin, Germany, the physical remnants of the cold war are scarce. Trailing along the path of the fallen Berlin Wall, Berliner Mauer, does little to yield any sensorial recollection of the area’s gloomy past; just like any other major European city, sporadic bicycle lanes snake between swaths of contemporary structures, linking each urban block to the next. The footprints of modernity—namely renewed infrastructure and broad economic development—have erased any tangible reminders of the wall’s corporeal existence. Instead, the intermittent appearances of sites dedicated to ‘cultural memory’, or Erinnerungskultur, are all that is left of a once impenetrable frontier. In those places where it still stands, artists have appropriated its surfaces for exhibitions of provocative visual expression—a sharp divergence from its inharmonious beginnings.

In reality, the erosion of the Berlin Wall’s prominence—formerly regarded as both a physical and symbolic barrier of political partition—corresponds to wider social change; young Germans, whose lived experiences are distinct from those of cold war Europe, are increasingly removed from the cleavages of their country’s past. If 1989 brought the fall of the wall, the 21st century has been a catalyst for a remarkable revolutionary swing. Current inhabitants of the east are sentimentally united with those residing in the south; their projections for the future are generally convergent, with national identity—historically a deeply divisive and dichotomised ideal—now a source of comforting solidarity. This is not to deny that political fissures still exist—they do. The moderate success of the identitarian far-right AFD party is demonstrative enough of the still elusive socioeconomic asymmetries caused by the ruptures of the 20th century. Rather, the dying domestic relevance of the Berlin Wall is suggestive of a country that has successfully escaped the most ruinous structural schisms of the cold war. It makes sense that its memory resembles that of an ever-fading ghost, trapped in an era lost on younger generations. 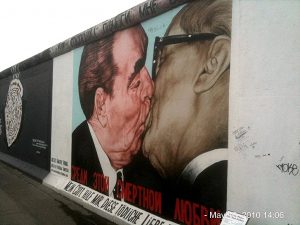 Image One: Tounge-in-cheek- a bold work of art is displayed on a preserved zone of the former Berlin Wall.

Yet, it is of tacit irony that the imagery of the Berlin Wall’s collapse has far greater implications for American character than for Germany itself. For, since its destruction, the United States has struggled to redefine its global purpose; the allegorical ramifications of the wall—a visible symbol of the ideational conflict between liberty and communism—gave American presidents an opportunity to ‘proclaim’ the US’ role to the world. Now, faced without an enemy to objectify or pursue, its leaders have been plagued by strategic inertia— failed forays into Iraq and Afghanistan exemplify the chronic crisis of geopolitical resolve inherent in the modern American disposition. Indeed, weakened interest for material engagement with the post-1945 liberal order— particularly within the multilateral fora of the UN and Nato—is a consequence of the deepening malaise of US foreign policy; the lack of a menacing state adversary has, in truth, inadvertently undermined its normative commitment to western institutions. Apathetic, it has no longer been able to preoccupy itself with the looming threat of Soviet expansionism, instead succumbing to a palpable sentiment of withdrawal fatigue.

In essence, the Berlin Wall helped to forge America’s perception of itself, for it was as much a theatre of ideology as it was a barrier of geographical division. Be it through the speeches of Presidents Kennedy, Carter or Reagan, the image of US power was foregrounded by this 96-mile-long slab—one that split East Germany from West, divorcing the lands of the free from those of the nonautonomous.

II. THE RISE OF THE CHINESE THREAT

If the life and death of the Berlin Wall was representative of two chapters of prior American strategy— (1) fierce competition with the USSR followed by (2) the rise and relative decline of US hegemonic triumph—then  contemporary concerns about the growing power of China can be evaluated through reference to the cold war and its aftermath. In effect, 20th century America defined itself against its presuppositions about the Soviet Union: the Doctrines of Truman, Kennedy and Reagan were all iterations of US foreign policy concerned with countering the perceived ills of Soviet Russia. Although the means differed, stifling the menace of communism was the overarching, salient theme. Essentially, the US had a palatable identity: it saw itself an active defender of freedom, and correctly so. The bipolar environment of the cold war allowed this vision to be regurgitated over decades; its identifiable enemy, the USSR, was primarily defined as a stark opposite—a dynamic that had the dual effect of spurring Moscow into developing a similarly oriented focus vis-a-vis Washington. 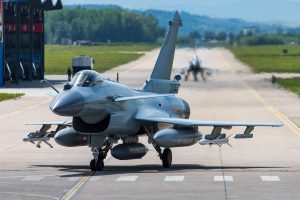 Image Two: Chinese miltary might- China has grown the size and calibre of its defence apparatuses.

These reminders, then, can help to define how the next era of geopolitical power will be shaped. Although the global balance of power is today contextually distinct, how the US directs its foreign policy will depend on the manner in which it assesses the Chinese threat. Will it, following two decades of embarrassing mishaps and lethargic technological renewal, seek to reconstruct its defence apparatuses? Initial readings appear to aver this possibility. Vast advances in Chinese military capacity, alongside attempts to saturate its footprint in the Taiwan Strait, have prompted hurried action in Washington. Currently, though, any potential shift in American defence policy is still stuck in a prenatal state.

This will quickly change. The Asia Pacific will transition into a tinderbox of geopolitical tension, demanding a reaction: Taiwan, Japan and South Korea are all of vital strategic interest to both the US and China. Here, Beijing’s sphere of influence will undoubtedly seek to splinter the wellbeing of American-Pacific relations by undermining US authority. This raises an important question: is Washington ready to confront the emergent challenge posed by the Chinese government? The signs, although only latent, are affirmative. What is clear, however, is that a frontier between democracy and authoritarianism is rapidly re-emerging.

Yet, while the shadow of a second cold war seems unavoidable, the Berlin Wall offers a cursory warning to Sino-American policy makers. Its symbolism reflected  a divided world; lost in a protracted bout of tension, the original cold war was characterised by multiple proxy wars, devastating conflicts and near catastrophe. While the interests of democracy eventually prevailed—despite the underhand support of US-friendly autocracies in Latin America and the Middle East— the previous era of bipolarity was one consumed by a febrile culture of fear and neglect. Any strategic tussling with China should necessarily avoid this eventuality— national economies are more immersed than ever, so any extended period of hostility would have a dramatic impact on global supply chains. Reform and outward-looking change—not conflict or unfounded suspicion— must be the preferred route. Therefore, a more coherent epoch of democratic engagement is vital. Because, as contemporary Germany society reminds us, people have more in common than they realise.