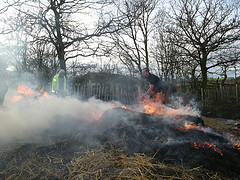 Fire, water, wind and earth – all elements test you to your limit

As a finalist, it would appear that I have unintentionally adopted the “work hard, play hard” approach to surviving the dreaded final year, and this turn of phrase is the only feeble excuse I can muster to explain my dim-witted determination to sign up for this year’s ‘Tough Guy Original Challenge’.

And judging by the surprised reactions I got upon revealing my plucky decision, no one was expecting me to do so either. But I guess that was only to be expected, given that I was once voted “The Most Disney Princess” from my sports team and that I own a pair of bright pink running shoes.

But after all, has a little mud ever hurt anybody?

Except I guess that’s why they always tell you to read the small print.

I didn’t go into it completely blindly. I was obviously aware that it would involve a little more than navigating a few laps of a muddy field, but in hindsight I perhaps should have done a little bit more research first. A report published by the Telegraph this week has pitted it as the “hardest obstacle course in the world” which annually attracts large numbers of “masochists”. Masochists?!

But still, the course wouldn’t be tough if it wasn’t designed to test you to your limit, and I was soon part-engrossed/part-horrified by past reviews from previous competitors. The circuit would involve all the elements: fire, water, earth (well, mud), and all bound together with undoubtedly cold and blustery winter weathers.

However, I wasn’t expecting to be experiencing the divine elements as well. The Greek God Zeus had clearly had his say in the proceedings, in that there would be obstacles involving electricity in the form of exposed wires, which, according to reviews, would pack more than just a bit of a punch. I have a mini-phobia of electric shocks following an incident involving a knife and a toaster (I’ll let you form your own conclusions on that one, but I was definitely old enough to know better), so I could already foresee that this would prove problematic for me.

Fast forward a few weeks, and following a few shady and incoherent emails from a sinister character going by the name of ‘Mr Mouse’, I soon find myself on the bus to Wolverhampton, feeling a mixture of anticipation and dread.

At the venue, we were greeted in the pitch black by bagpipe players, in a bizarre welcoming ceremony which only seems to add to the ominous nature of the event. Being part of DUCK, we are cordially offered a place to stay in one of the venue’s barns, which in hindsight, sounded cosier than it was. Gone were the rural dreams of a good night’s slumber in the hay bales, as we were led to a drained out swimming pool. Settling my sleeping bag on the cold tiles, I just assumed this was an extension of the challenge. And it was.

The next morning, we were woken up early. Very early. (I remind you that on a Sunday I relish my sleep).

But it’s race day! Yawns and grumpiness were soon quickly replaced with excited chatter and porridge carb-loading, pulling on our thermals and adorning ourselves appropriately with race numbers, GPS trackers and headbands. I decide that a bow would definitely be an appropriate accessory for my pink trainers.

Nerves begin to kick in as the race start looms closer. I’m still in the barn, and I can already feel my toes going numb with cold. As we’re herded out to the start line, the wind whips my face.

A countdown. Fireworks. We’re off. I no longer have time to be afraid.

It’s a war zone of people, and there are literally maniacs throwing themselves down the opening part of the course, a steep hill, cheering and jeering. Smoke bombs are detonated left right and centre, and the crowd is cajoling, encouraging the carnage to ensue.

We’re off to a good start. The initial part of the course is a fairly straightforward run, bear a few ruts. We approach the first obstacle; there’s some log obstacles to vault, before approaching some deep muddy channels that we are given the choice to attempt to jump across or navigate through, a task getting harder as the channels become deeper and wider.

I’m surprised, as I am actually enjoying myself. Until I plunge myself knee-deep in sludge.

It’s not long until I reached the hurdle of my nightmares. The electric passage. I take a deep breath, and hurtle through. Zap, zap, zap, ZAP. I cry out, and I instinctively make the mortal mistake of trying to retreat back to safety. ZAP ZAP ZAP ZAP. No, no, no. I’m back where I started, double the shocks, and on the verge of a mild panic attack. Blinking through tears, I reattempt to zig-zag my way across. This time I appear out the other side unscathed, but shaking like a leaf. It’s this of aspect of Tough Guy that makes it as much as a mental challenge as a physical one.

Consequent obstacles soon merge into one big blur of physically demanding and mind-over matter activities: from clambering over large wooden walls, up rope towers, wading in and out of lakes, crawling under nets and one particularly gruesome task which involved ascending and descending a steep and slippery muddy hill repeatedly. But still, so far so good, I’m feeling strong and having a bit of a laugh with it.

Three hours in however, and we’re nothing short of being physically and mentally exhausted. My mind is awash with obscenities as my shoes are with silt. Laughter had long since turned to a feeling of shivering and despair, and like how someone stranded in a desert despairingly dreams of discovering an oasis, my only thoughts were on getting myself back into a snug warm bed. We’d spent significant periods of time hauling ourselves in and out of icy water, dragging our feet out of mud, and it had been some time since I’d last felt my fingers.

Being so cold and so tired has such a profound effect on your sense of perspective, and the simplest of tasks suddenly became terrifying and insurmountable, and near the end I’m ashamed to say I suffered a mini breakdown. Though I guess it’s not called the “Killing Fields” for nothing.

Stumbling across the finish line, we are quivering and mumbling wrecks. Never in my life have I been so grateful for a kind volunteer to assist me in putting on dry clothes and shoveling jelly babies in my mouth. Two hours later I finally regained feeling in my toes.

On average, a third of all entrants don’t cross the finish line, and a good number end up with symptoms of hypothermia. Despite this, I would highly recommend it. It was undoubtedly one of the toughest things I’ve ever done, and the sense of accomplishment accompanied with it is second to none. However, I don’t think I will ever dare to do it again.

It is said that “Everyone bar the toughest will be beaten.” Which I can now proudly say doesn’t include me and my little pink running shoes.