The Story of Rising Fees: Past, Present, (no) Future… and the Protest that Ensued 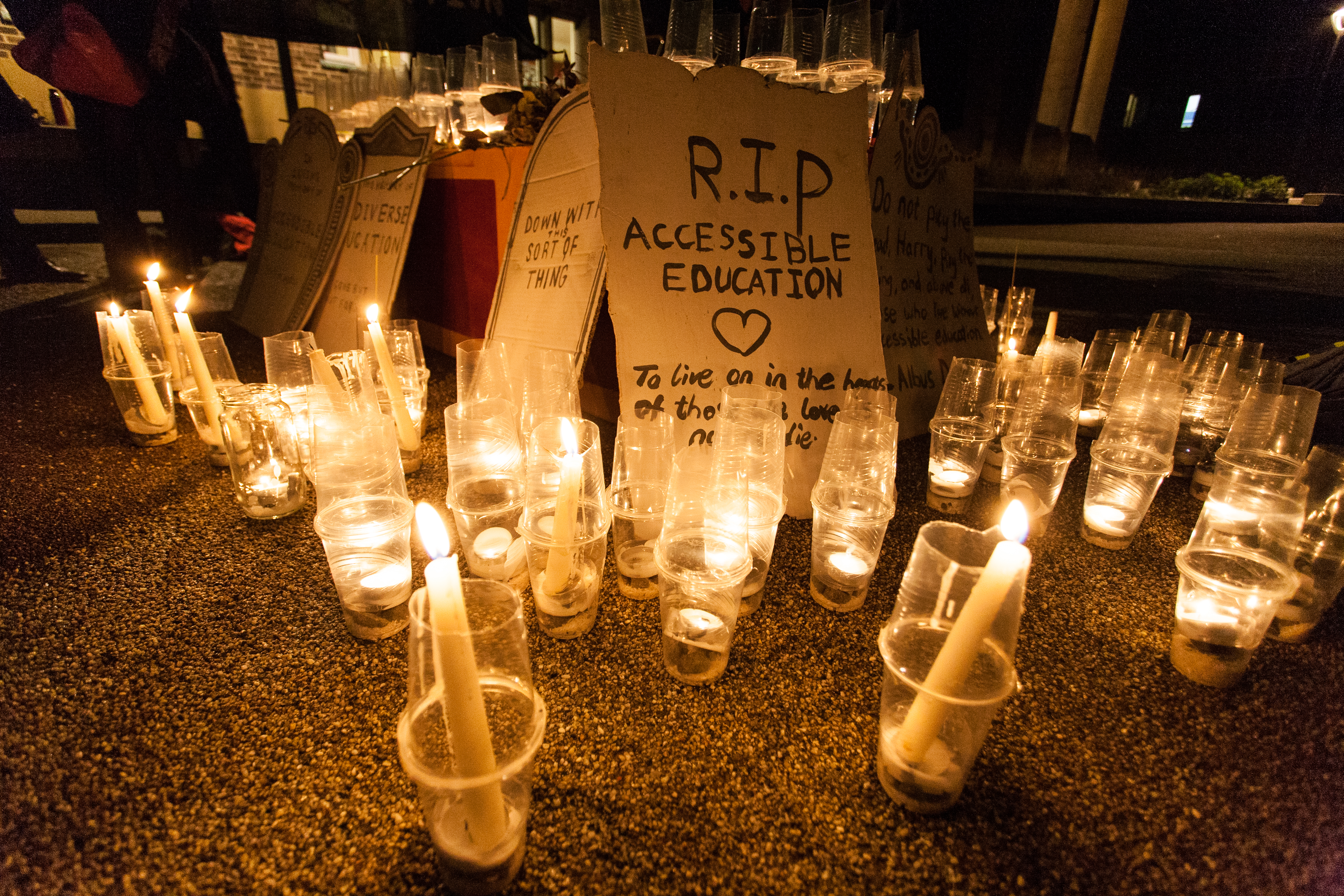 All images credit to Samuel Kirkman

The issue of rising accommodation fees is one that can be epitomised in metaphors and symbols. The university’s early lock-down of the Palatine Centre on the evening of the student protest depicts perfectly their thinly-veiled ignorance and disregard of the “student communication” they purport to maintain in post-protest pathetic attempts to save face. Or perhaps the whole issue is better represented by the hundreds of students whose talents in art, creative design, poetry, music, speech-making, and innovative thinking were shut out to be rained upon on a wet Tuesday evening in December. Indeed, this runs an uncanny parallel to the university’s attitude to “welcoming” students of exceptional academic and creative merit, irrespective of circumstance and background. The procession even featured a Grim Reaper – clad with scythe – but his axing ability is given a good run for its money by that of the University’s Chancellor… metaphorically speaking, of course.

But, unfortunately, the issue is not one that can be confined to sentimental metaphors and pretty symbols. For many, it is a case of a bitter reality. And it is for these students, both current and prospective, that the funeral for accessible education marched through the streets of Durham. The students simply refuse to allow social progression to be set back by a hundred years; archaic buildings do not entitle archaic views.

I hope the university doesn’t think we’re trying to imply that a lumpy single bed with a communal shower and potatoes seven days a week isn’t worth in excess of £7000. And I didn’t at all begrudge the accommodation fees that left my account on the 1st of December last year, the same morning I woke up to a bedroom flooded to above my ankles, ruining clothes, property, lecture notes, and the “college experience” I paid through the nose for. Not at all.

Durham University, in all its self-elevation, have coined the phrase ‘Doxbridge’ and have subsequently persisted in shoving it down our throats. This is sheer impudence when they’re attempting to charge us £2000 more for an identical Oxford experience. On top of this, the Durham Grant for students from low-income families has been cut by almost a third in recent years, yet another barrier in place between their ambition and their reality. It had better be top-of-the-range cashmere wool they’re trying to pull over our eyes.

Sadly, the situation is a hopeless synecdoche of a wider national attitude towards higher education as governmental support is slowly sucked out of an increasingly corrupt system. Students can only watch on as higher education funding is stripped, alongside diminishing grants and gaping opportunities for universities to charge upward of £9000 annual tuition fees.

With a 28% increase in accommodation in four years, international fees booming to just shy of £21000, and the university investing some £35 million in fossil fuels, it can’t help but raise the question: why are they not “investing” in the students?

Invest in the students who made themselves ill with stress in order to better their chances. The students who exceeded others’ – and their own – expectations in order to achieve top level academic success. Those who refused to let their financial circumstances limit their prospects – inflated themselves with ambition, and hoped (not unjustifiably) that an academic institution might value this and welcome them with doors flung wide. But, apparently, it’s more about how much money is shoved in their parents’ back pockets.

This is an issue of apathy over empathy, regression over expression, excess over access. But, their Palatine thrones have been rocked; they’ll shut us out but they can’t shut us up.