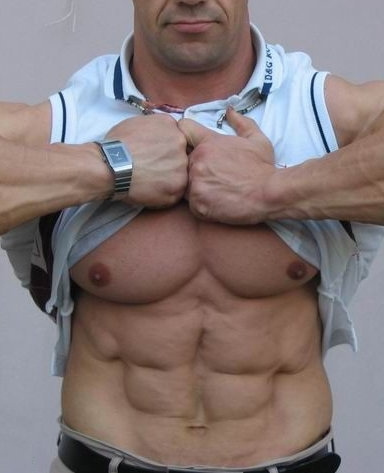 “Men are becoming increasingly aware of how they look”

But what if I were to turn this concept on its head and suggest that it is men that are being sexually objectified? On the one hand, I cannot deny that there seems to be more evidence of women being treated like sex objects and I must emphasise that I am speaking from a specifically Occidental point of view. On the other hand, recently, I have seen more and more that men are also being treated by the media in the same way as women, or in some cases worse. Men are becoming increasingly aware of how they look, or rather the media is encouraging them to become increasingly aware, and we have begun to see a lot more advertisements that feature half-naked men and their glistening abs alongside the unhealthily thin women which we are more accustomed to seeing. More products are being marketed to men, and the pressure is on for them to be tall, fit and impeccably toned. So are we not insisting on similar demands for perfect men as we do for women? It seems the answer is, progressively more and more, yes.

What advertisements fail to explain is that it is a model’s job to look good, so whilst the average person is spending their day working, Ryan Gosling, for example, has spent six hours in the gym working out with a personal trainer, only to go home and have his meals cooked by a specialist nutritionist. The poor guy is only allowed to have chocolate once a month. Of course, this is just speculation, but it is nevertheless very close to the truth. Both sexes are faced with this impossible challenge of reaching the impossible physical, visual ideal whilst also maintaining a healthy, normal lifestyle and aspiring to become successful in their careers.

Arguably it is harder for men when it comes to physical appearance. Whilst women can shave away unwanted hair, men cannot really ‘miracle-grow’ theirs and though women can slave away for hours over make-up to enlarge their eyes, it seems it is socially unacceptable for men to wear make-up. In any case, I am not sure there is any make-up available that would create the appearance of the perfect ‘masculine’ jaw line. In addition, girls tend to be more particular than guys, it’s an inescapable biological fact, so there’s arguably more pressure on guys to look good, especially in our day and age, as men no longer have the power they used to have; they no longer represent a woman’s financial security, as women can now provide that for themselves. Moreover, I would say it is probably more common to see advertisements with photographs where the male body has been unnaturally dissected by the camera, rather than the female body, leaving the viewers to analyse just the male torso rather than see the part as belonging to a real human being. For such an example, one just has to think of Jack Wills or Abercrombie and Fitch bags.

As this trend increases, it seems that men and women will both be equally sexually objectified and exploited by the media and the consumerist market in the near future. We will have achieved gender equality in a completely different way to what most people had imagined, but in a way that will surely delight the capitalist markets who can now market their products to a much larger audience, now that ‘looking your best 24/7’ is not just relevant for 50% of the population. And whilst the majority of the population are kept busy by worrying about always looking their best, always having the latest gadgets (important now to both men and women rather than arguably previously, just men) and being successful, the company giants can be allowed to go on exploiting their clients, the cheap work forces and the environment to increase their profit margin.

This seems to end on a rather bleak note, but it should be taken as a wake-up call. Society should be working towards a world where there are no gender expectations and equal opportunities abound; we should not be working for equal objectification. It is important to remember that whilst the Western world is going about its day to day business, encouraging the rest of the world to aspire to its modern ‘greatness’, there are better self-improvements to undertake than calorie counting or obsessive ‘gyming’. For example, learning to be more generous, not just with your money but with your time, and valuing people for who they actually are and not just what sexual opportunity their body represents, are surely far more important goals. This is not to say that going shopping or looking good should be banned, or that people should stop going to the gym or trying to eat healthily, but once desires to look good or to have the latest ‘insert technology name here’ have surpassed or threatened personal potential, they become more like personal prison bars than healthy ambitions.

If you would like to learn more about the issues surrounding sexual objectification, please use the following links: