Join Team v: Change the World One Campaign at a Time 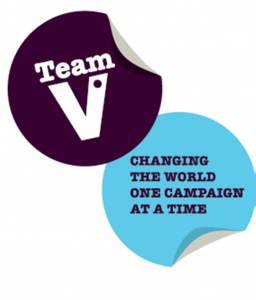 Team v is at the heart of national youth volunteering

Edward is a 20-year-old student at Durham University, who continuously felt inferior due to being at a lower economic and financial level than those in his friendship group. This feeling troubled him, which is why he tried to take actions that, according to him, equated them. His aim to ‘fit in’ made him seem like a rowdy person who is always unreasonably talkative and funny. In order to grab people’s attention, he bragged about not attending lectures, made fun of people, and dealt with others in a way that was devoid of decorum and respect. In his second year at university Edward joined Team v, to accompany one of his friends. This spontaneous experience changed his life. As he began to volunteer and was assigned responsibilities he felt important and sensed that he had a role, which bestowed him with confidence. Volunteering with Team v enabled him to substitute his fake persona with his authentic personality, and his negligence with tangible responsibilities, without giving any importance to his low economic level.

In contrast, Sophie is an 18-year old living in County Durham. She was very shy and did not communicate with her family at home nor with her classmates at school. Subsequent to joining Team v she learned to socialise and voice her opinions. She has become a strong and independent lady who is now capable of providing support and assistance to her community. Her family believes that Sophie has truly changed after joining Team v; at home they notice the modifications she had undergone, which is why her sister has also decided to volunteer with Team v.

These stories are foreseen experiences that all volunteers involved with Team v are bound to undergo. Catherine Uttley, Durham Team v leader from 2013–14, says “Getting involved with three amazing Team v campaigns last year in Durham was so much fun and it’s amazing to feel you’ve done something positive in the community! I can’t wait to see another three campaigns hit Durham and build on last year’s successes. I’m sure they will get bigger and better and spread all the goodness of Team v further amongst the community!”

Team v is part of a national network of young volunteers led by the charity vInspired. As a whole, vInspired is the nation’s leading youth volunteering charity that has created more than one million volunteering opportunities. It provides young people with the fortune to accomplish things they are passionate about, through volunteering and social action. So far, over 150,000 young people have used vInspired.com to volunteer with more than 3,600 charities. Since Team v’s creation in 2011, they have tackled a variety of social issues, from mental health to the environment.

Given that their slogan is ‘changing the world one campaign at a time,’ they work on three campaigns annually, starting with the ‘Beyond a tin of food’ campaign, which they will be working on for the next three months. “It is not only about collecting food for food banks, but raising awareness about the reasons behind food poverty. In the last three years, food poverty has risen by 610% and there are over 1 million people now accessing food banks. To use a food bank, you have to be referred so there are probably many more people out there struggling,” says Meg Kneafsey, Durham Team v Leader for 2014–2015. She then adds, “This year we are planning on running a pub quiz where people bring in non-perishable food to enter. We are raising awareness in Durham town centre and having a huge food drive in the town centre the first week of December. We have the support of Durham Foodbank and Durham MP Roberta Blackman-Woods.”

In order for Team v to accomplish its ‘Beyond a tin of food’ campaign goal, it is calling upon all Durham residents who want to tackle social issues. It is looking for socially conscious young people – both from the university and the local area – to help co-ordinate three campaigns over the academic year. Therefore, if you are looking for a life-changing experience and you are an enthusiastic young person, aged between 18 and 25, then Team v welcomes you to bring forward your ideas, skills, and commitment. If you would like to start making a difference in Durham, regardless of your background, culture, ethnicity, or religion, then contact the Durham Team v leader at meg.kneafsey@vinspired.com. Find more information about the campaign here: https://vinspired.com/beyond-food.

Overall, volunteering should be a self-fulfilling and inspiring part of any individual’s life. We all have a duty to help the less fortunate through volunteering. Luckily at Durham University, volunteering opportunities are endless via societies such as Durham Student Community Action, ActionAid, One Durham, UNICEF, and Team v.