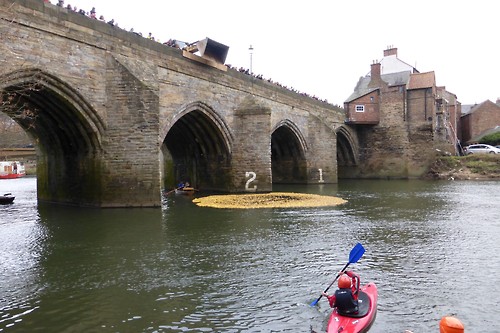 Yellow pervades the atmosphere. A mustard-coloured crane (the presence of which will be explained later) brings out the amber flecks found in the crevices of each stone block paving the way to Durham Town Centre. My bright lemon ticket pales in comparison to the effulgent amber beaming from each of the rubber ducks soon to take a dive into the River Wear. The only sign of yellow being suppressed is in the sky, which is a stark, unforgiving shade of grey. It is Durham after all. But the clouds’ efforts to suppress the sun’s rays fall short in suppressing the crowd’s excitement which rages on with the rapids of the river.

The date is 15th March 2014 and this particular Saturday afternoon marks the annual Duck Race held by Durham University Charity Kommittee (DUCK). Having paid my one pound fee, my mind presents me with images of lavish nights spent partying in the town and bundles of new clothing to fill my already bulging wardrobe. All of this could be paid for with the five-hundred pound first prize reward! The mathematical side of my brain quickly begins to calculate just how many packets of sweets and chocolate bars I could purchase from the local supermarket; at this point my mental age reflects my actual age in no way whatsoever. But putting these thoughts aside, I begin to think how much more impact the one pound I have donated by buying a rubber duck for the race will make to DUCK’s chosen charities.

Spectators line up their I-phones and portable cameras, waiting for the moment that the crane will drop hundreds of seemingly terrified rubber ducks over Elvet Bridge and into the River Wear. Children scramble to the edges of the water (whether pushed forward by their own will or their parents’ ushering hands) and eagerly await the release of Durham’s least dangerous captives, held in the towering crane above.

2pm. The crane begins to move and the eyes of every adult and infant alike are transfixed upon the gradual extension of the cylinder holding the ducks that are soon to be released. Lens extended, focus fixed; anti-blur imaging set. “Three. Two. One!” The cylinder rotates, unleashing a cascade of rubber ducks into the river below as canoeists prepare to steer any neon-coloured mavericks back to the main race course. After a plunge into the depths of the river, the ducks re-emerge in an ever-expanding ring, growing larger and larger with the varying eddies and currents.

The growth of the duck’s circle reminds me exactly why so many people have gathered to participate in this relatively bizarre event. Expanding and gradually dispersing in order to cover a wider area of the river’s surface, the spreading of the ducks mirrors the propagation of malaria within the blood stream. Thus, it only seems increasingly fitting that one of DUCK’s chosen charities for this year’s DUCK race is the Against Malaria Foundation, a malaria prevention organisation which uses one-hundred per-cent of donations made to buy Long-Lasting Insecticidal Nets (LLINs). Each net costs three dollars and the Against Malaria Foundation works with distribution partners to distribute nets and ensure their usage. Considering that over one million people die of malaria each year and that seventy per-cent of these people are children aged five years old or younger, it seems that malaria is a far more pressing cause for concern than some might think. A cause for concern whose solution can be, and has been, supported by an afternoon spent watching rubber ducks, hired for one pound each, race in the River Wear.

However, the 2014 Duck Race has also raised money for the Treetops Children’s Ward in Durham, which provides an occupational therapy service helping parents and carers to understand the difficulties that their children face according to their individual ailments. The occupational therapy offered also equips young patients, aged two to eighteen years old, with techniques which they can use to help them cope with day to day life. Thus, despite helping people in vastly different and distant parts of the world, the Against Malaria Foundation and Treetops Children’s Ward in Durham share the same aim of improving the quality of people’s lives, making both equally worthy of DUCK’s support this year.

Having ventured through water, branches and some horrifyingly unidentifiable grime, the ducks reach their destination. Their seemingly light-hearted journey takes on enormous significance, as the achievement of their collective goal provides DUCK with hope that the charities supported by this race will also continue to reach their goals, one day at a time. (Needless to say, I did not win the Duck Race. But I don’t mind. After all, there’s always next year!)

If you would like more information on the Against Malaria Foundation or Treetops Children’s Ward in Durham, please use the following links: