Beyond a Tin of Food Campaign 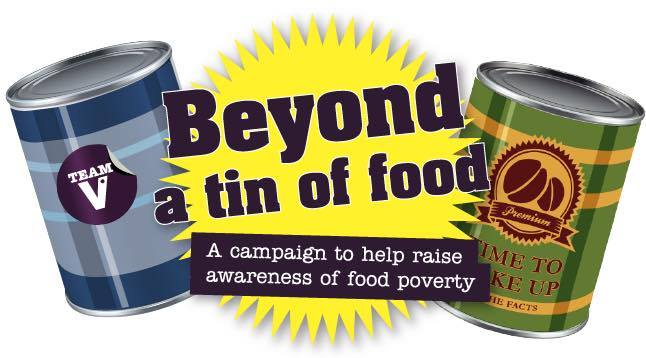 As the lead up to the Christmas season approaches and the truly cold November weather hits, you may find yourself frequently rooting around in your cupboard for food to warm the cockles, or thinking about that glorious Christmas dinner that’s soon to be consumed. But many people in the country struggle to get through the days fed and well-nourished, let alone get to even think about treating themselves to warming winter food.

Did you know that in the last three years the amount of people using food banks has increased by 610% to 1 million people nationwide? Of those helped, 330,205 were children. Food poverty is happening right here on your doorstep – Durham is one of the worst affected areas in the country. On Wednesday 12th November, at 1–4pm, the Durham Food Poverty Awareness Afternoon will aim to raise awareness of food poverty in Durham and the country as a whole. This event will be run by Durham Team v volunteers as part of their ‘Beyond a Tin of Food’ campaign. Come along to Durham town centre to learn more about food poverty and how you can help. At the stall there will also be postcards for people to send out to MPs in their home constituencies about food poverty in their area, in order to try and spread the awareness even further afield.

On the whole, very little is known about the harsh realities of food poverty; we rarely consider it and sometimes take food for granted. To coin a phrase, knowledge is power – without people learning about the problem at hand, we will never truly be able to tackle it. Before I got involved with Team v, I didn’t realise that people had to be referred to food banks in order to receive food from them. This often means people getting to a severely malnourished state before being referred by their doctor, or a teacher noticing that a child isn’t eating properly.

Even then, people still struggle immensely post-referral. For instance, they may experience problems with cooking the food when they return with it. People on low incomes may not have the money to own an oven or pay energy bills; they may simply be unable to cook it. Equally, with the layout of Durham so divided between rural and urban spaces, this can lead to difficulties in getting to the foodbank. One foodbank client told of having to walk for seven miles to the food bank with a pram to carry the food, and then walking another seven miles back to their home. Fortunately, due to the tireless work of the foodbank volunteers, Durham Foodbank is able to deliver emergency food boxes to those who need it – but their supplies are always limited. This is why they need your help and your donations. The Awareness Afternoon on Wednesday will give people the opportunity to donate much-needed food for Durham Foodbank. We will also be collecting toothbrushes, nappies, tampons and other similar essentials.

The event is set to coincide with the Hunger Challenge on 11th-13th November, which some of the members of Team v are carrying out. During this time you buy and live solely off the food items you would be given if you went to a food bank and received three day’s emergency food supplies. The Newcastle East food bank parcel which would be handed out to one individual requiring emergency food aid consists of the following items:

2 cans of soup/1 packet of soup

1 carton of juice/1 bottle of squash

By documenting the experiences of people who do the challenge, we can further raise the profile of food poverty. This is the only way it will be recognised by politicians as urgently needing to be tackled. If you wish to get involved, use #beyondfood to follow the campaign on Twitter and to discuss your own experience of the Hunger Challenge.