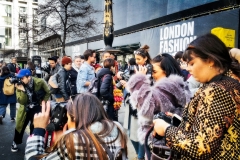 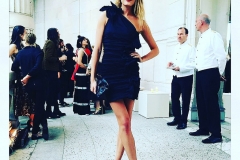 Sustainability, diversity and global business – these were just some of the long-term aspirations driven home by fashion designers in the recent London Fashion Week.

London Fashion Week (LFW) has always been a biannual extravaganza, showcasing the latest fashion masterpieces generated by renowned British and international designers.  And this year was no exception to the rule…

However, Britain’s impending withdrawal from the EU gave LFW a subtle political tone in its plea for a softer Brexit deal.  The importance of the UK’s fashion industry is not to be underestimated, contributing £28 billion to Britain’s economy, whilst supporting nearly 900,000 jobs.  LFW welcomes guests from over 58 countries, promoting designer brands to an international audience of traders and consumers, thereby providing an ideal global platform to address the impact that Brexit will undeniably place on British fashion industry.

Prime Minister Theresa May and Chairman of the British Fashion Council, Dame Natalie Massenet, upheld the tradition by convening the reception of the LFW at 10 Downing Street, inviting representatives from across the British fashion industry to discuss the global significance and current importance of fashion.  The pinstriped prime minister attempted to reassure the reception that she recognised that “British fashion is serious business”.  However Stephanie Phair, chair of the British Fashion Council, contended that May’s Brexit proposal overlooks the possible detrimental impact upon the “sheer numbers” involved in the fashion industry.  Currently, fashion is a booming industry, employing almost as many people in Britain as the financial sector.

The pool of international buyers drawn to the LFW enabled designers to demonstrate the importance of ensuring the UK continues to have access to the single market after Brexit, since a surprising 70 per cent of the British fashion industry’s £8.5 billion exports go to Europe.  May’s push towards a hard Brexit would prioritise restrictions on economic migration, diminishing the exchange of the free movement of labour between the UK and the EU.   Since over 70% of the workers in London factories are EU nationals, designers are uncertain about how to accommodate plans for production and manufacture of their products.  Furthermore, although there has been no definitive guidance published by the EU commission, it is generally accepted that when the UK leaves the EU, unregistered designs disclosed at any launch event, such as LFW, will not benefit from the EU copyright laws currently in action. This change will be exceptionally problematic for the retail and design industry.

However, it is important to recognise the fashion industry is not entirely doomed to a dwindling decline in the post Brexit age.  There has been a sudden bounce in luxury fashion sales following the European referendum vote, with an increased interest from overseas buyers taking advantage of the drop in the value of the pound against the euro and the dollar. British brands like Burberry are witnessing increased profit margins following a rise in demand by international investors for quintessentially British fashion, a style that is very much in vogue currently.

LFW has even combined forces with the Mayor of London to campaign to unite the fashion industry in a call for a safer and greener future.  The aim of the ‘Positive Fashion’ initiative is to commit fashion businesses to convert to registered green energy suppliers by 2020.  The campaign aspires to be a catalyst for global change, with a number of brands already committed including Harvey Nichols, Oliver Spencer, Stella McCartney, Teatum Jones and Vivienne Westwood.

Uncertainty and instability plague the future of all British industries during the period of Brexit negotiation deals; and none more so than the British fashion industry, which will undoubtedly be forced change the way business is conducted both internally within the UK and globally.  However, one can’t help but focus on the message resonated by Theresa May, highlighting that the ability to adapt will be the key quality in helping UK make Brexit a success.  Given the ever-increasing fast pace of fashion, it is highly likely that the fashion industry is already ready and waiting to seize the latest opportunity to be thrown in its way.