A checkered future for Burberry? 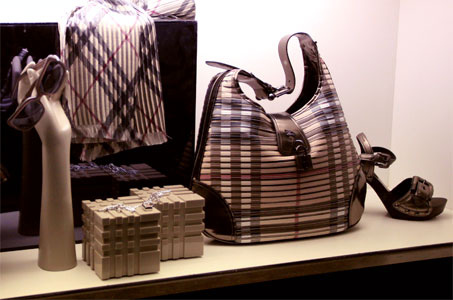 Burberry sales growth will be driven by trends in emerging markets and online shopping.

When Angela Ahrendts announced her departure from Burberry and move to Apple last year, the shock factor of this news sent share prices tumbling by 8pc. Ahrendts (who joined Burberry in 2006) was the highest paid chief executive of the FTSE 100 in 2012, and will receive an award for her services to business this year. However, Ahrendts has justified the move to Apple, confirming her complete faith in incoming chief executive Christopher Bailey, who will also continue in his role as creative officer. Bailey has also announced the creation of a new position: chief design officer which is to be filled by Luc Goidadin who has worked at the firm for twelve years.

Burberry, founded in 1856, has a unique heritage, with its trademark raincoat which has kitted out military officers in the Boer War, and soldiers in WW1. Now the firm has expanded into a retail giant of the FTSE 100, with a market capitalisation of over six billion dollars. Under leadership of Ahrendts, the firm reached the 1bn target for sales revenue and has undergone a major image transformation. There were concerns however, that the brand’s luxury appeal had plummeted, and that the iconic tartan was now instead an image of ‘hooliganism’. As Justine Picardie (editor-in-chief of Harper’s Bazaar) has suggested: “That iconic plaid had become… I’m not going to use the word chav, but that incredible legacy had become associated with the cheapest form of disposable rip-off fashion. Angela Ahrendts and Christopher Bailey have taken it back to its pure heritage.” It seems then, that brand awareness can have a diminishing marginal effect, where too much exposure can be perilous for high-end appeal. Indeed, relighting the Burberry flame would be no easy task, which involved purchasing back a number of licenses which allowed the use of the iconic check pattern, which had been sold to firms which targeted a different, and somewhat less high-end market. These licenses had included using the check print on disposable nappies for dogs, which did nothing but damage to the brand’s appeal.

Burberry is still continuing its battle for image transformation, and has recently introduced a new cast of models for its spring/summer 2014 collections, as well as a cosmetics range. Most critically, however, it is rising e-commerce, and growth in emerging markets, including attempted integration in Japan, which appear to be the main drivers of this positive sales trend. Rival firm Karen Millen, as well as online fashion giant ASOS, have also realised the potential markets of emerging economies, with Mike Shearwood (the chief executive of Karen Millen) revealing intentions to open over four hundred new stores, and franchised outlets globally, alongside a flagship store in New York. Burberry has recently faced one setback which may hamper its control of the Chinese market, though, where its application for exclusive rights to the red, black and cream check pattern was recently refused, following concerns that this would monopolise Scottish heritage. Burberry and ASOS have also declared that a strengthening pound could put pressure on international demand for British exports. Indeed, Ahrendts has confirmed that falling consumer demand in Australia is a result of rising sterling value against the Australian dollar, which has increased by 15pc in just one year. These concerns are in line with the warnings issued by the Monetary Policy Committee of the Bank of England.

Whilst Bailey has suggested that there will be few major changes to the firm’s structure and strategies under his control, he has revealed intentions to ‘streamline’ the management team into three divisions (product, regions, operations and finance) which will support his leadership. Whilst a number of commentators fear that Bailey’s lack of financial knowledge could prove detrimental to Burberry’s future growth prospects, it is clear from the leadership of Ahrendht’s and Steve Jobs at Apple previously, that a creative mind can be the critical tool which shapes a firms success. Despite this however, Burberry, amongst a number of other firms (including J Sainsbury and Chemring) have been noted by investment bank UBS as potential takeover targets in 2014, following the announced departure of Ahrendts which stripped 536bn from the firm’s market value. Last year UBS issued takeover warnings for Virgin Media which proliferated in a 15.5 acquisition deal by telecoms company Liberty Global.

As Angela Ahrendts concludes in her outlook for the new financial year:

“Burberry today is brilliantly positioned for future growth. We are an old British company with the energy and drive and global outlook of a young one with tremendous ground momentum and significant opportunities by channel, by region and including the transformative potential of Burberry Beauty and the Japanese integration”. It seems then, that the economic outlook for Burberry is difficult to quantify and it remains to be seen whether Christopher Bailey will hold the fort for future growth. But it is clear that growth in online sales and demand in emerging markets will be a significant determinant, and if growth continues to rise in line with the sales figures for 2012/13, there is little reason to assume that Burberry will not have a strong year.