An interview with Nathan Law: the fading hope of Hong Kong 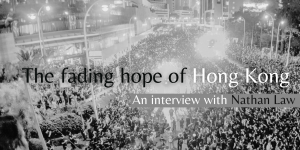 When I briefly sat down with Nathan Law, pro-democracy activist and former Time100 poll winner, the geopolitical mood that foregrounded our conversation was markedly sombre. With Russian authoritarianism threatening a democratic Ukraine, Mr. Law’s message appeared—at least to me—more urgent than ever. For, in recollecting his experiences of top-down political repression in Hong Kong, his story offered a stark reminder of just how quickly democratic freedoms can fade. Complacency, he suggested, was no substitute for action; holding the powerful to account is the only means through which an engaged citizenry can preserve and advance its legal, social and political rights.

In the case of Hong Kong, the rapid evolution of authoritarianism has muzzled dissent and civic participation, condemning an entire generation of Hong Kongers to silence. Some have fled for fear of punitive persecution and others continue to criticise the Chinese Communist Party (CCP) for its normalisation of arbitrary violence against its opponents—risking their lives and wellbeing in the process. As a prominent figure of the Umbrella Movement (2014), Nathan Law recognises this reality all too well: in 2017, he was jailed for his involvement in the protests, serving eight months. His story, then, is one of warning and of inspiration: the defence of democratic freedoms relies upon the virtues of vigilance, hope and activism—a tool kit that has been brutally denied to the people of Hong Kong but one that still remains in the grasp of western citizens.

Q: In China there has been a rise in authoritarianism across the board—not just in Hong Kong. Why do you think we’re seeing a clamp down on political opponents?

I think the Chinese Communist Party (CCP) has a growing confidence in its authoritarian model and it is obvious that they need to retain legitimacy by suppressing others. This is because they (CCP) do not have a process of getting a mandate from the people. So, on the one hand, they are becoming increasingly confident with their political model, but on the other, they (CCP) are feeling more exposed by criticism and dissent. This means that they are using an increasingly heavy-handed approach to silence political opposition, which might correspond to a lack of confidence in themselves.

This is reflected in the fact that when they are confronted with criticism, they clamp down with violence. We saw this with the Umbrella Movement in the mid-2010s—something I think shows a rise in aggression. Also, the diplomatic strategy of China a decade ago was more reserved. They were using a hand-and-bite strategy. But now they (CCP) are being more aggressive. They are trying to topple the so-called liberal order in the world, attempting to replace it with their own international order through different projects. This, I think, shows a growing ambition and aggressiveness from them. This has ultimately led to a more heavy-handed approach. 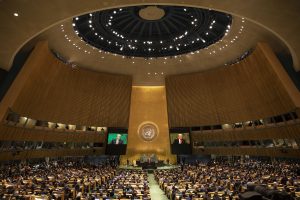 “They (Chinese government) are trying to topple the so-called liberal order in the world, attempting to replace it with their own international order through different projects. This, I think, shows a growing ambition and aggressiveness from them.”

With the passing of the punitive National Security Law (2020), should we expect a more repressive, heavy-handed approach in the immediate future?

The Hong Kong government is attempting to further expand actions it considers to be in breach of the National Security Law (2020), such as through Article 43. Essentially, this amounts to further suppression of Hong Kong citizens.

One of the more tragic consequences of authoritarianism is that is greatly restricts the daily lives of normal citizens. Do you think—however slim the odds may appear to be—there is a way to break back away from authoritarianism and head towards a more democratic future for Hong Kong? Or is it too far gone?

I think that in the near future, it will be very difficult to overturn the current situation. China remains very confident with its system of government and that seems to be rising. But, of course, we have seen a lot of problems in Mainland China, including the failure of industrial transformation and a changing society, etcetera. They (Chinese government) are also more isolated on the international stage, so I think together, with all these factors combined, the authoritarian system of the CCP will face problems—it is not as stable as they (CCP) seem to want to suggest.

So, with all of the repressive measures instituted by President Xi Jinping, why do you think he and his acolytes continue to speak of this Confucian ideal of a ‘common humanity?’ Is it tied to worries about a decline of CCP authority?

Repression is the way in which he (President Xi) wants to preserve legitimacy. For example, he claims that China is a democracy and that other western democracies are not. He continues to claim that China maintains the rule of law when it is obvious that the Chinese legal system has been completely wrecked by the CCP. Yet, they still need legitimacy and these terms (such as ‘common humanity’) allow them to try and maintain authority. So, those grand terms espoused by Xi Jinping, such as a “common future for humanity”, serve the same purpose. In the first nine months since the scheme was introduced, there has already been around 90,000 applications. The British Home Office is estimating that there will be more than 320,000 people coming to the UK through the visa scheme. I do think that this has—and will help—a lot of people to escape from political persecution. But also, for the UK, it creates a win-win situation because these people will bring with them expertise and knowledge, capital, and will add to a certain labour market in the country. Indeed, I think we are trying to integrate ourselves as best as possible and I really feel that others are also doing well.

So, with time running out, I want to ask you a final couple of questions on the state of democracy in the west. Since you have arrived in the UK, have you been concerned about democratic backsliding here and in other western democracies?

I think we have witnessed democratic backsliding on a global scale and I believe that many countries, including the UK and the US, are suffering from a lot of misinformation campaigns and populist uprisings, which is of concern. But in democratic countries we have the freedom to talk and to critique those in power— the citizens of Mainland China simply do not have the opportunity to do that.

Finally, do you think that in the succeeding decades, world democracy will improve and revitalise itself?

Well, I don’t intend to predict things—I try and raise awareness of authoritarianism. So, as long as we act, we can do better. Because the only thing that we are lacking is the determination to make change. 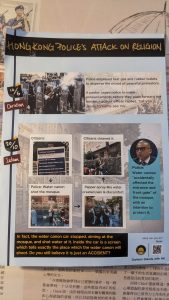 This leaflet, courtesy of Durham Stands with Hong Kong, highlights the systematic repression of religious and ethnic minorities.

This was not the only thing that Mr. Law had to say. In addressing a packed conference room, he emphasised much of what he had told me. He reflected on the fading hope of a democratic future for the citizens of Hong Kong, imploring the audience to “not take freedom for granted” because, as he repeated on more than one occasion, “democracy is in a state of crisis”. Yet, perhaps the most emotive moment of the talk was his frank assessment of what his homeland had become. For, under the influence of the Chinese Mainland and the CCP, Hong Kong was no longer a “place of refuge”— it was a “producer of refugees”. This sentiment was the most tragic of all; it encompassed a story of a people unfree and unsafe, prisoners of their thoughts and unwelcome in their own home. This is something that Mr. Law wants to change—but the only collective choice we have left “is to act”.

Nathan Law is an activist and was one of the leading figures of the Umbrella Movement (2014), later becoming the youngest person to be elected to the Legislative Council of Hong Kong (2016).