Start your engines…The winner of Ru Paul’s Drag Race All Stars season three Trixie Mattel is touring around the UK this February and March. Trixie is loved by many fans of the show for her big, teased hair, her sharp eye makeup and her gags! The Skinny Legend Tour is going to many places across the UK including Birmingham, Sheffield and Newcastle. In the Q&A, Trixie revealed that she is really looking forward to coming back to Newcastle. Make sure you buy your tickets to see her before they go!

Trixie has said that what you can expect from her upcoming live shows is, virtuosic guitar-playing and hair that touches the sky. These are two characteristics which Trixie is famous for after appearing on our screens. Trixie, the drag alter ego of Brian Michael Firkus, continually uses the label ‘skinny legend’. When questioned about this, Trixie has clarified that it is more of a mindset or a persona, rather than a number on a scale. To be a skinny legend is to express confidence, being happy with who you are and ultimately, she says, getting verified on Twitter! You too could be a skinny legend – keep your head high, make-up fierce and have razor-sharp reads – because reading is what? Fundamental. 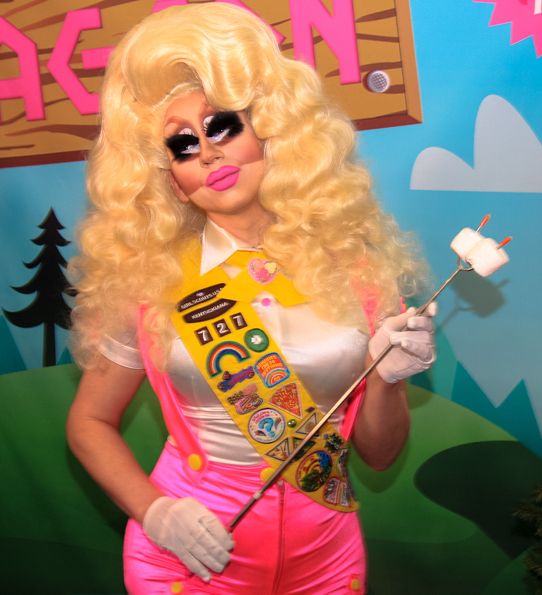 For all the hard-core drag fans out there, you will know that Ru Paul’s Drag Race is coming to the UK, after having 10 seasons filmed in America, and 4 seasons of All Stars. Drag can differ all over the world, from the queen’s make-up to the acts that they perform. This is shown in Drag Race as all the queens have different styles and ways of performing their drag. Trixie stated that she believes UK queens are similar to New York Queens, such as Monet X Change, who has just been crowned the winner of All Stars season 4. The opening act on the Skinny Legend Tour is Victoria Secret who is from Dublin, who Trixie loves to watch perform, so make sure you don’t miss out!

What is next for Trixie? After winning All Stars, she has enjoyed the success of her two country folk ablums, 2017’s Two Birds and One Stone. As well as pursuing her music career, Katya and Trixie created a web series ‘UNHhhh’, which became ‘The Trixie and Katya Show’, which is loved by viewers across the globe. Trixie has said that she will be launching a cosmetics endeavour, as nobody uses and abuses make-up like drag queens do! She revealed that there will be a Trixie Mattel documentary to look forward to, so keep your eyes peeled for that.

Trixie is coming to the O2 Academy Newcastle on March 4th and tickets are available at ticketmaster.co.uk, and I promise you’ll have a drag-tastic time. In the words of Ru Paul ‘Don’t F*ck it up’.