Our train was delayed, tickets wrong and an 80mph gale-force windstorm forecast for the north-east region overnight. None of this mattered in the bunker that is the Newcastle Student Union. The room smelt like third-hand leather and angst and was at first sparsely decorated with a mixture of baggy-shirt uni students, post-punk rockers and nostalgic boomers.

The course prepared and directions wide open. Lounge Society delivered a vivid, palpitating warm-up act, defibrillating the audience into action and locking us into the stage space. ‘you’ve got blood on your hands’ frontman Cameron Davey hollers at us. Nerves and senses were alive and kicking.

The Orielles, whilst reigning the tempo and magnitude in, offered a sensory euphoria. Esme Dee-Hand-Halford asks in ‘Space Samba’ “can you re-align my sensory home?” They succeed, resoundingly. In fact, their sensory experience is almost synaesthetic, similar in a way to the Cocteau Twins, who imagined ‘cherry-coloured funk’.

The Orielles were aurally and sensually surprising and innovative, as their “Sugar Tastes Like Salt” would suggest. Their music sustained a persistent throb, with guitarist Henry Wades’ distorted arpeggiations matching the misty, high-pitch vocals of Dee-Hand-Halford creating a kind of ethereal dreamscape. Their sound was connective. Wade would loop a reverbed guitar phrase and solo over it, whilst Sidonie B thrashed out rolling, Kraut-rocky beats. They enervated the crowd, at times whipping us into a frenzy.

But, most impressively, this high-octane energy was tempered and controlled beautifully by the focused technical work of the synth player and ‘DJ’. It was this skilled poise, control and rhythmic tightness which allowed them to easefully oscillate between an almost trancey dreamscape vibration to high tempo 90s indie rock and then cruise back into their textured post-punk Stereolabesque trademark. It was for this reason that the space was so connective. It was a space where a crowd-surfing student, rugby chanting, angsty head bobbing, a middle-aged whirligigging woman and a drunken boomer with a north-face Schöffel called Nigel could all coexist. The crowd, the music and the space were richly textured. It was ‘sensory realignment’ and when they sing, ‘”isolation, room for creation”, it is clear to see that isolation, for them, has been very productive indeed. 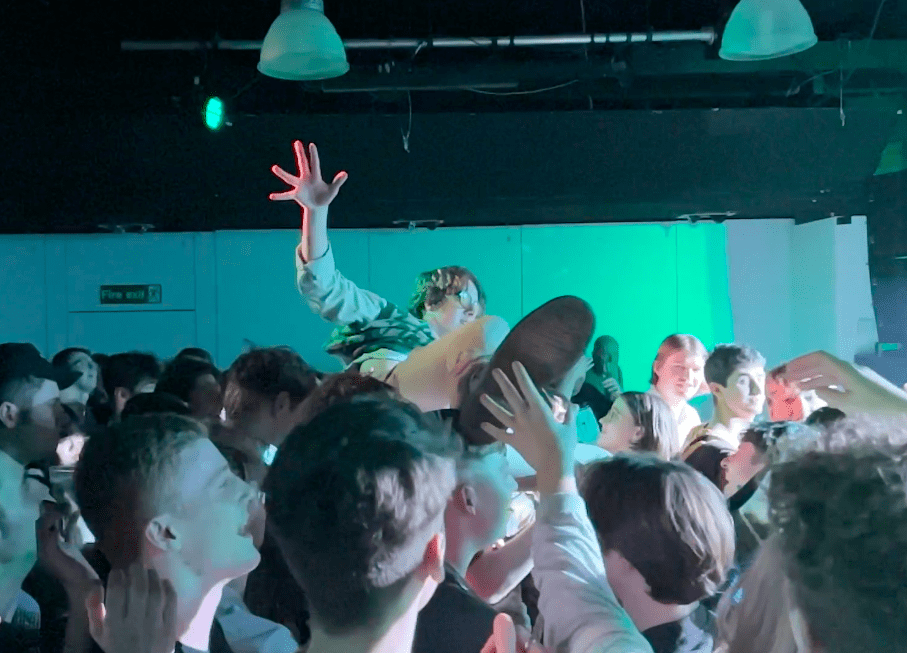