The Bubble’s Top Picks for This Year’s Academy Awards

As the 91st Oscar Gala approaches The Bubble’s Film Editors share their predictions and their own winners. 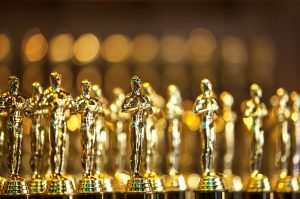 Ábel: First of all, what the hell are Black Panther and Bohemian Rhapsody doing here? And where is First Man? Unfortunately third year got the better of me so I haven’t seen as many of these as I should have but for me Roma was slightly disappointing and I was a huge fan of Green Book. I am seeing The Favourite on Monday though, that might get my vote in the end. As things stand Green Book for me, but the Academy will probably appreciate Roma instead. Although I’m a bit scared that they go absolutely nuts and give it to Black Panther. I hope I’m wrong.

Martin: I’d concur, I really don’t think many of these are deserving of the best picture nomination? If I was going to pick the film I enjoyed the most, it would be BlacKkKlansman, hands down. As far as actual winning predictions, I reckon Roma will be the winner, but it’ll likely have stiff competition from The Favourite; just look at how it cleaned up at the BAFTAs. 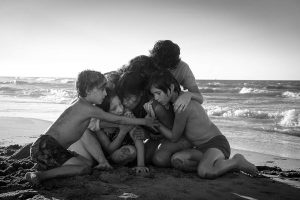 Katie: Roma would get my vote (though BlacKkKlansman is technically my favourite of the nominees overall, it has a couple of issues that stop me from saying it’s the ‘best’), and I imagine it’s getting a lot of votes from Academy members, too. It’s definitely a two horse race between Roma and Green Book, and both are equally divisive in their own ways. I would tentatively hedge my bets on Roma, but it’s very much neck and neck.

Actor in a Leading Role:

Ábel: Viggo Mortensen delivered a rather complex performance which is the heart of Green Book and he somewhat undeservedly didn’t get much credit for it. However, it has to go down between the two biopics here; either Christian Bale or Rami Malek will take it. My guess would be the latter given that I agree with Martin below in that Malek’s performance stands out a bit more obviously. His character allowed him to be more energetic than Bale.

Martin: This is a two horse race for me; either Christian Bale’s calm, cool and collected turn as VP Dick Cheney, or Rami Malek completely embodying Queen frontman Freddie Mercury. Both are phenomenal performances, just for very different reasons. Malek’s performance is completely electrifying, especially in concert scenes, whilst Bale’s Cheney has our attention from the word go, oozing the kind of unquestioning authority Cheney’s staff had.

Katie: Rami Malek is running away with this and I have mixed feelings. He absolutely deserves it and, as a general Malek enthusiast, I’ve wanted him to win since before Bohemian Rhapsody even came out. However, back in October I promised a friend that if Malek won the Oscar, I’d do a solo rendition of the song Bohemian Rhapsody at the next college karaoke night. This was back when Bohemian Rhapsody had mediocre reviews and was considered out of the awards race, of course. I love the unpredictability of awards season! 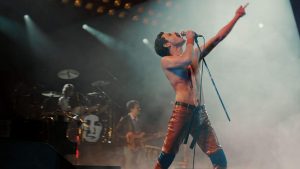 Actress in a Leading Role:

The Nominees: Yalitza Aparicio (Roma), Glenn Close (The Wife), Olivia Colman (The Favourite), Lady Gaga (A Star is Born), Melissa McCarthy (Will You Ever Forgive Me?)

Ábel: If I had to choose from this lot I would go for Yalitza Aparicio, however the Academy will probably give it to Glenn Close as Martin and Katie will explain below.

Martin: If I was being smart, I’d back Glenn Close as the winner, even though I don’t think it’s the most deserving performance. For me, that’s got to be McCarthy’s surprising turn towards serious drama in Can You Ever Forgive Me? Given she was also recently leading in comedies that should have been stopped long before release  (I’m thinking The Happytime Murders, here), she really deserves the recognition. 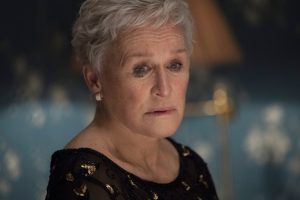 Glenn Close in ‘The Wife’ (imdb.com)

Katie: This is unfortunately going to go to Glenn Close, simply because it’s probably her last shot at getting an Oscar and the Academy will vote for her as a ‘career Oscar’ rather than being the best performance of the year. If I had a ballot I’d be voting for Yalitza Aparicio or Melissa McCarthy, but all four of the other actresses are being robbed by the Academy’s weird tradition of rewarding older non-winners for their entire career rather than their actual nominated performance. I watched The Wife last night and not only is it mediocre at best, but Glenn Close has about 2 minutes in the film where she does anything remotely special. The other nominated actresses have their entire respective movies.

Actor in a Supporting Role:

Ábel: If Viggo Mortensen’s performance is the heart of Green Book, Mahershala Ali’s is its soul. Two years ago I got a lot of hate in a comment section for criticizing the the decision to give an Oscar for Ali’s ten minutes of screentime in Moonlight, but I would not complain now for sure. I think the Academy and I might actually agree this time. 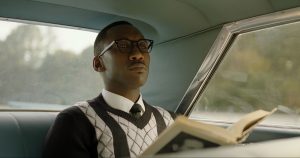 Martin: If Green Book had missed awards season, I’d 100% back Adam Driver for this award, but I just can’t with Mahershala Ali here. The extraordinary depth his character has in Green Book is by far and away my favourite part of the film, and it’s easily the most powerful performance in the category.

Katie: If Mahershala Ali doesn’t win this I’ll eat my own foot, but equally the press has been so positive and charming for Richard E. Grant these past few weeks and apparently lots of Academy voters have expressed that they are voting for him, so if any underdog is to snatch it away from Ali, it’s him. For what it’s worth, I would also vote for Grant even though Ali is also mesmerizing. The press is a magical thing.

Actress in a Supporting Role:

Ábel: The biggest tragedy of this season’s Oscar’s is the complete omission of First Man. I honestly believe that Claire Foy should win in this category let alone be nominated. I personally couldn’t even choose from this lineup. Regina King is the most likely to win.

Martin: If either Weisz or Stone win, it’s gonna be an awkward evening for the loser I think. For me, this has to go to Amy Adams. Her Lynne Cheney is the engine driving the extraordinary force of Bale’s performance, functioning akin to a modern Lady Macbeth character. Her ruthless turn is testament to Adams’ huge range of acting talent, and as such for me renders her the clear winner.

Katie: This is the category that I question the most. Regina King is technically the frontrunner and will probably win, but she’s also been shut out of other major awards that opted for Rachel Weisz or (bafflingly) Emily Blunt instead, so there could be room for an upset here. And it would be a welcome one for me personally, as King’s performance in If Beale Street Could Talk ended up being very underwhelming in my opinion. If I had a vote, it would go to Emma Stone. 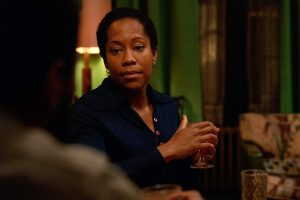 Regina King in ‘If Beale Street Could Talk’ (imdb.com)

Ábel: There is a scene at the beginning of Roma where our pregnant protagonist realizes that the father of her child has left her. She leaves the cinema while the busy vendors, and a man selling yo-yos are yelling in the background. Her environment gets more and more chaotic, the yo-yo man is speaking louder and quicker; she is collapsing mentally. Her whole world is about to end, yet no one seems to care at all. Brilliant piece of directing and Roma is full of similar scenes so Cuarón has to take it, and will do so. It’s just a shame that the connection of these brilliant scenes is not worthy of their execution.

Martin: Spike Lee did a wonderful job of articulating a powerful message with BlacKkKlansman, situating that whole film firmly within contemporary thought. With all of this done in the closing moments of what is otherwise ostensibly a black comedy, so I’d be more than happy for him to win. However I want to champion Pawlikowski here. I think it’s a crying shame that Cold War isn’t up for best picture, as for me it was a visually stunning and wonderfully crafted story that has seemingly been forgotten by a lot of these categories. The least the Academy could do is give Pawel this win.

Katie: This is Alfonso Cuarón’s to lose.

Ábel: From what I’ve seen from The Favourite it looks to have a beautiful cinematography and to use contrasts really well which is a technique that has always been my weakness so it would get my vote for sure. However, it will probably go down between Cold War and Roma, with the latter winning.

Martin: I want Roma to get something, and I think this its category to lose. Even if it gets stiff competition from Cold War’s glorious, war-time aesthetic, it’s probably Roma for me. He’s not exactly a stranger to ingenious shots; just go back and watch Children of Men and you’ll see why.

Katie: Either Robbie Ryan for The Favourite or Alfonso Cuarón for Roma, even though those fish eye lenses in The Favourite are ghastly and Ryan should be barred from this award just for those awful shots alone. I’d like to see Cuarón take this one as well as director and picture. 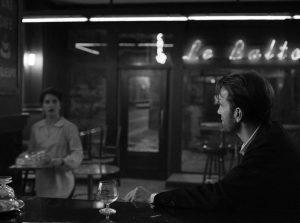 The Nominees: Incredibles 2, Isle of Dogs, Mirai, Ralph Breaks the Internet, Spiderman: Into the Spiderverse

Ábel: I expected Ruben Brandt, Collector to be here, but unfortunately it was snubbed, even though it was a fascinatingly original and fun film. Spidey will probably swing this and not undeservedly so.

Martin: This is barely a competition at all. I think there’s potential for an Isle of Dogs upset, but if the award DOESN’T go to Phil Lord and Christopher Miller for Spiderman: Into the Spiderverse, I’m not watching the Oscars ever again. Probably my favourite film of last year, Spiderverse was glorious to watch; there was clearly so much care that went into its adaptation, the visual style, the soundtrack…I could go on, easily.

Scene from colourful ‘Spiderman: Into the Spiderverse’ (imdb.com)

Katie: It gives me great pleasure to be able to say this will go to Spiderman: Into the Spiderverse. I can’t wait to see Phil Lord and Christopher Miller holding those Oscars and essentially screaming “bet you’re sorry you fired us now” at Disney and Solo: A Star Wars story. Though I love Isle of Dogs and feel it’s been sadly forgotten in the sea of 2018 films.

Ábel: I feel that László Nemes’ Sunset would have deserved a nomination but given that film’s theme and how much it leaves to the audience, it will probably need time to be appreciated as a masterpiece it really is. Never Look Away has an interesting concept as well, but Roma will probably edge it over Cold War. It was a really strong year in this category.

Martin: It probably feels like I’ve turned my back on Roma, but I just really do love Cold War, so it’s got to be the winner for me. Roma is genuinely very good, I swear.

Katie: Roma will win this one too, though there could be a mindset of ‘well, if I’m voting Roma for Best Picture, I’ll vote Cold War for foreign film.’ It probably won’t happen, but it’s a possibility. 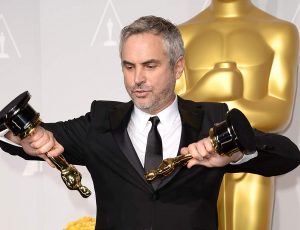