Your Halloween Watchlist for 2020

As if life was not scary enough right now, Spooky Season is upon us. However, with little to celebrate so far this year, the return of warm autumnal colours, nights drawing in, and carved pumpkins popping up around town is all so very welcome. Films have long reigned supreme over Halloween, but there’s no reason not to indulge in some seasonal television shows too. The Gothic and the grotesque, the horrific and the wickedly funny… Whether, like me, you are stuck isolating indoors until (or beyond!) the 31st  of October itself, looking for a new series to watch with your house, or simply in need of some inspiration, here there is something for everyone.

Whilst by no means an exhaustive list, I have tried to compile the best of what’s currently available on streaming sites to save you the dreaded fate of endless scrolling.

If you have not watched this fantastic show yet, now is the perfect time. A love letter to 1980s pop culture, the show initially focuses on the mysterious disappearance of a young boy, Will Byers, and the troubling appearance of a young girl, Eleven, under supernatural circumstances. Expect monsters, conspiracies, romance, and seriously exceptional psychokinetic skills, all threaded together with those ever-strong bonds of friendship and geekiness. With the filming of Season Four only just underway, you have plenty of time to enjoy watching the likes of Millie Bobby Brown, Winona Ryder, and David Harbour in action. And these costumes speak for themselves.

The Stranger Things crew get Ghostbusting. Image by AntMan3001 available on flickr.

All four seasons of this macabre detective drama are currently available on Netflix. Staring Rupert Penry-Jones and Phil Davis, the Victorian-meets-Contemporary premise explores a series of copycat killings in London, with the first series focusing on Jack The Ripper. Twists and turns are rife in this dark and intriguing show.

Looking for a ghost story? Largely what they say on the tin, The Haunting of Hill House and The Haunting of Bly Manor were created by Mike Flanagan, with the former being inspired by Shirley Jackson’s novel of the same name, and the latter inspired by Henry James’ The Turn of the Screw. Released on the 12th of October 2018 and the 9th of October this year respectively, they have generally proved successful amongst audiences. Capitalising on grisly tragedy, paranormal activity, jump scares, and plenty of eerie atmospherics, it’s fair to say that the faint of heart should watch at their own peril.

Sarah Paulson. Vibrant 1940s costumes. Gore in oh-so-many unexpected ways. The only thing sharper than the ice-pick in this psychological thriller is Nurse Ratched’s tongue. A large degree of artistic license has been taken in creating a homage to the infamous psychiatric nurse from One Flew Over the Cuckoo’s Nest – critical reviews are bafflingly mixed. However, I would argue it is still very much worth your time. Even if you only stay for the chemistry between this authentic femme fatale and Cynthia Nixon’s endearing secretary, Gwendolyn. 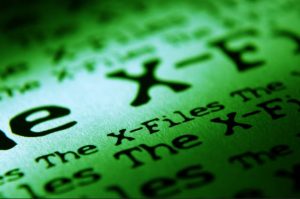 This summary cannot do it justice, but is it really Halloween if you aren’t at least thinking about Mulder and Scully? The cult classic sci-fi show spans eleven seasons and two films, only coming to an end in 2018 *sob*. The show revolves around FBI Special Agents who solve X-Files – unsolved cases of paranormal activity – eventually leading them into a much wider conspiracy which affects them both in numerous ways. Featuring liver-eating mutants, alien abduction, psychics, and countless murders in the first season alone, there’s plenty to sink your teeth into. And as if Gillian Anderson’s presence wasn’t enough of a reason.

Gunpowder – leaves Prime on the 31st of October

A dramatic retelling of the events which led to the failed attempt to assassinate King James I by blowing up the House of Lords. The gritty costume drama manages to cling to its suspense and spectacle despite the forgone conclusion we know will arrive. Starring Kit Harrington, an actual descendant of the plotter Robert Catesby, this high-octane show is certainly worth catching before it leaves. 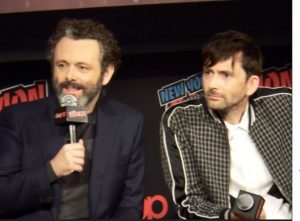 The stars of Good Omens at NY Comic Con. Image by zuko1312 available on flickr.

Quirky, addictive, and genuinely funny, this show (based on the novel by Terry Pratchett and Neil Gaiman) showcases the talents of actors David Tennant and Michael Sheen (fans of Staged will know how hard it was to order those names). The story revolves around an angel and a demon, both earth-dwelling, both accustomed to each other, who must create an often-disastrous alliance in order to prevent the coming of the Antichrist. If you enjoy extravagant costumes and witty tributes to various historical or mythological events, start watching.

The Woman in White

This is an adaptation of Wilkie Collins’ classic novel, which is widely considered to be the earliest detective mystery of its kind. Over-brimming with disturbing suspense, foreboding, and Gothic essentials, this mini-series is perfect for Halloween. Whilst I must concede that the original 1997 BBC series is better, so long as you are not a purist about the book and just want some escapism, get stuck in. 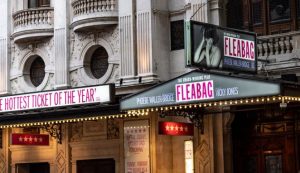 Fleabag and the one-woman-show that inspired the series. Image by Raph_PH available on flickr.

The ultimate dark-comedy masterpiece created by Phoebe Waller-Bridge (also of Killing Eve fame). This award-winning show follows the dry-witted but badly hurting Fleabag as she navigates her life through grief, anger, and all that is dysfunctional round her. Frequently breaking the fourth wall, incorporating a host of scintillating guest stars, and establishing long running gags that just keep giving, Waller-Bridge has really created an iconic work of art here which deserves to be appreciated by everyone.

From the creators and actors many of us came to love in Horrible Histories, Ghosts is certainly a comedy directed more towards grown-ups than CBBC. (They really have managed to follow their audience) A young couple inherit a crumbling mansion inhabited by ghosts from across the ages, who seek to cause mayhem at their every turn. Both series are available on iPlayer and it is a must-see for those who love history combined with slapstick wit. Or just watch it for Mathew Baynton. No judgement there.

Tom Hardy not only stars in this chilling 19th century drama, but he also co-created it with his father, Chips Hardy. Set in the darkest dregs of London, it follows a man who returns to England after a long stay in Africa, bringing with him a bounty of stolen diamonds. Teeming with corruption, deceit, and ongoing brutal commentary on the class divide, this is a gripping watch.

The Alienist/Angel of Darkness (Netflix)

Inside No. 9 (five seasons, BBC iPlayer)

Finally, it is a bit of a cheat, but Dracula performed by Northern Ballet is still available on iPlayer too. Vampires. Ballet. Fabulous.