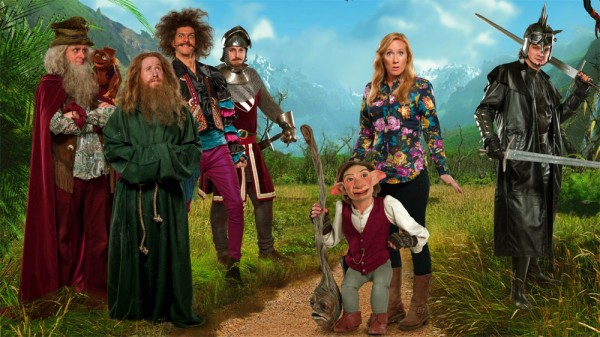 It’s high time I brought you a completely unbiased review of the brilliant, two-year long screen-rave that is known asYonderland. I only began watching Yonderland by chance this summer when, in a daring move, my younger brother changed the channel from Top Gear on Dave to Yonderland on Sky1. Despite this late arrival I was immediately hooked and had soon binged my way through both series.

Yonderland is a comedy set in a medieval fantasy world, inhabited by clueless council elders, bickering wizards, News dragons and an egotistical villain ‘Negatus’. Protagonist Debbie is caught between this fantastically quirky world where she is ‘the chosen one’ and our parallel, mundane world in which she is a stay at home mum. Episodes generally consist of Debbie falling down the rabbit hole (in this case a glowing blue portal in her cupboard) into Yonderland and using her common sense to solve the ridiculous problems that escalate so quickly there. 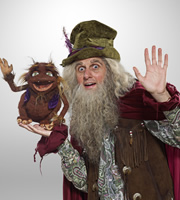 Wizard Bradley and his Mojo.

However, it is not the premise, nor the meandering storyline that make Yonderland particularly special. Indeed, these sorts of descriptions originally led me to believe it was something similar to children’s show The legend of Dick and Dom. What is brilliant about Yonderland is that it sparkles from than rare vein of comedy which is equally funny for both children and adults. Fundamentally, it is a silly, light-hearted sketch show, rich in visual gags and truly obscene characters. However, Yonderland is also embellished with thoughtful quips and cheeky pokes reaching through the screen into our ‘normal’ world.

As described in the helpful equation, Yonderland has the feel of a modernised Monty Python with a few stringed muppets chucked in for good measure. The show relies heavily upon the knee jerk comedy of eccentric characters in suitably eccentric costumes and modulation via some very endearing puppet characters. There is no end of puns, jokes and dodgy accents from the cast. Not all of these land with impact but some are simply hilarious. There is also a sense of experimentation from the cast, as if they are just trying to get the biggest laugh among each other as much as anything else. Seeing Debbie interact with the weird and wonderful characters that the writers can dream up never gets old – if anything, the characters just get more and more ridiculous.

Who is responsible for such a thing?

The sketches are written and performed by the team behind the CBBC’s children’s TV show Horrible Histories. Mathew Baynton, Simon Farnaby, Jim Howick, Martha Howe-Douglas, Laurence Rickard and Ben Willbond were all poached by Sky, who then commission Yonderland. Mathew Baynton is particularly prominent in the show, voicing the sidekick ‘Elf’, numerous lesser characters and is currently starring in You, me and the apocalypse (Sky 1).The first series of Yonderland aired back in November 2013 with the second and final series ending in August 2015. The episodes are only about 20 minutes long and were originally aired on Sky 1 but are found online at sites such as NOW TV.

I recommend looking up this show as it possesses the jolly charm that comes with good clean fun. Although Yonderland has not won any awards of note and is, in my opinion, poorly appreciated, it is sure leave a smile on your lips. I, however, will leave you with a video where some of the cast recall their favourite catchphrases, of which there are many!