Today we are overwhelmed with television. It’s everywhere- phones, tablets, in cinema and occasionally even on actual TVs. Netflix, for instance, aims to release 700 original programmes this year. However, whilst modern television has hugely progressed in the past twenty years, it does mean that older programming is often neglected. With fewer repeats and screenings needed to fill up schedules, it is only cultural behemoths like Friends who can survive the sheer televisual excess and still be watched by successive generations. As a result, excellent TV from the past is forgotten.

Luckily, not everyone is willing to accept this.

A multitude of channels and services have sprung up in recent years to try and correct this. Take, for instance, Talking Pictures TV, the increasingly popular vintage television and film channel. Despite originally beginning on Sky, its move to Freeview has heralded a minor revival in the bizarre and odd from the past. An average day’s schedule can include anything from an obscure comedy from 1944 rubbing up against a late 50s adaptation of HG Well’s Invisible Man to a crime drama directed by Michael Winner, alongside programmes such as Private Eye, equivalent in tone and impact to Luther in its day. By showing these programmes again, Talking Pictures brings back something lost in the modern televisual landscape: the joy of stumbling across something obscure and discovering that it’s amazing. This is surely a good thing, preserving the memories of television past and adding more variety into the schedules. 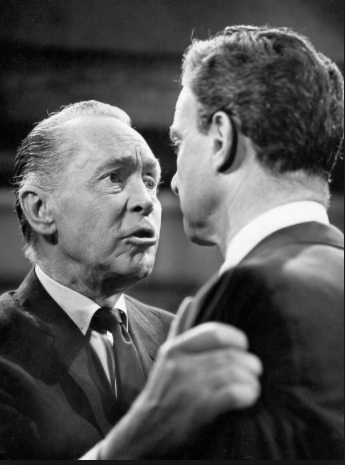 Similarly, other free-to-air channels such as Horror, Yesterday and Drama showcase the odd and obscure of British and American television. These channels’ online presence also aids their mission- the value of being able to catch up with episodes of East-enders from 1986 on demand is inestimable. Other online services such as the BFI Player also offer vintage television for free, such as South, an ITV live drama from 1959 which was the first depiction of a “queer” story on British television. Largely forgotten, it’s presence online allows new generations to discover how innovative and brave it was. Netflix too acts in the service of old television. Programmes ranging from The Twilight Zone to Bill Nye the Science Guy can be accessed at the touch of a button, meaning that you can explore television heritage from the comfort of your own bedroom. Netflix’s algorithms can also help in this- whilst predominantly used to push their newest programmes, occasionally it will uncover an obscure gem.

So, why watch programmes from the past, and why do people care enough to set up channels solely for the purpose of doing so? A number of reasons. There’s a purely historical dimension- these shows provide a window into a world which has long disappeared, where pints cost 3p and Roger Moore’s eyebrows were more exciting than the Olympics. Also, it injects some difference into increasingly homogenous schedules, providing an alternative for those of us who don’t just want to watch a “cinematic” BBC drama starring the same three RADA graduates.

Most importantly, these programmes are still shown because they’re still good. Yes, the picture quality might be terrible, the accents RP and the script editing wobbly. But there is a reason they have stood the test of time- strong central performances, important stories and careful production.

Don’t let their age put you off.