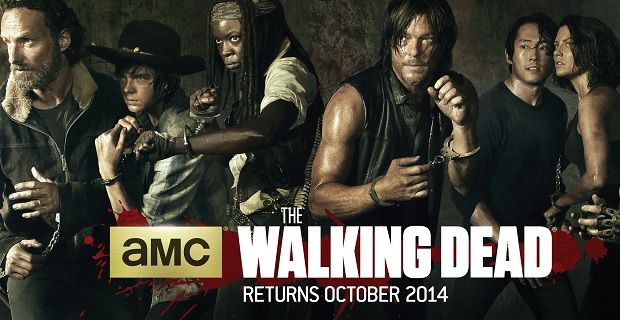 Avid fans of The Walking Dead (TWD) will be well aware that the Season 5 finale aired some weeks ago (31st of March to be exact). Before we all get transfixed by Game of Thrones Season 5, let’s take a moment to digest this highly anticipated end to TWD Season 5. For most people, this episode really delivered. ‘Rotten Tomatoes’ gave the finale 97%, based on their averaged reviews classing it as ‘Certified Fresh’. For a TV show centred around walking piles of rotting flesh, the finale was indeed, certainly fresh! We had deaths, gore, power play, awesome zombie kills, and climaxing of season-long plotlines; we even see the return of the illusive Morgan “Ninja” Jones. But first let’s have a quick recap of the season so far, needless to say, there will be a crippling number of spoilers.

Season 5 begins with a much-needed jumpstart when Carol sets the infamous cannibal-inhabited ‘Terminus’ aflame, providing Rick and the group with the opportunity to escape. The leader of the cannibalistic ‘Hunters’, Gareth, tracks the group down in attempt to enact revenge but the plan backfires when Gareth and the few remaining hunters become the hunted themselves. They are all either shot or hacked to death by Rick and Sasha, leaving the loose-ends of the Terminus storyline tied up – not a moment too soon! We also finally learn that Beth has been held against her will in a dysfunctional hospital, run by a group of ex-cops. Although Daryl and Carol track Beth down and the group attempt to rescue her via a hostage exchange, the deal goes south and Beth is killed. Finally we breach the two plots which dominate the latter half of Season 5: 1) the road to Washington and 2) The Wolves.

Since Season 4 the writers have been dangling the possibility of a happy ending in front of us in the form of Eugene’s plan to save the world. Eugene claimed to know how to end the zombie apocalypse, insisting the group simply needed to get him to a government stronghold in Washington where he could ‘reset’ the process. Abraham states ‘Eugene will make the dead die and the living live’ but soon discovers this is all a ‘straight-up lie’ to get Eugene to the putative safety of Washington. Nonetheless, the group head to Washington in the hope to finding some sort of government infrastructure. They instead encounter Alexandria, a walled, self-sufficient town, which has escaped the apocalypse mostly unscathed. However, the residents of Alexandria are painfully naïve to the post-apocalyptic world, causing frustration amongst Rick’s group and leaving them vulnerable to the increasingly ominous ‘Wolves’.

I hope I am not alone in finding it incredibly satisfying to finally put a face to the mysterious killers that we have so often come tantalisingly close to meeting. They are repeatedly foreshadowed in a rather unsubtle manner, primarily with some red graffiti in a ransacked town ‘Wolves not far’ and prolonged close-ups of ‘W’s carved into the Walkers’ heads. Additionally, and perhaps more tenuously, they are foreshadowed in the quite random scene where the group are attacked by a pack of starving and rabid dogs as well as the focus on hunting in Sasha’s storyline. It is strongly implied that the Wolves are responsible for the chopped up bodies that feature heavily at a number of locations as well as the murder of a woman left tied to a tree to be ripped apart by Walkers. In the finale Morgan meets two of the Wolves, both of which have the red ‘W’ on their foreheads and one of which is a pretty chilling individual. We assume this one is the leader and he states in no uncertain terms that he intends to take everything Morgan has, ‘every, last, drop’, even Morgan himself. Morgan easily knocks both of the Wolves out with some awesome fighting-staff skills. However, we later see the wolves go on to rob another individual ‘Red-poncho’ and, true to their words, even use Red-poncho’s body as a part of a Walker-trap to catch more people.

Gareth and his cannibals at Terminus are pretty hard to top as villains but the Wolves are definitely more horrific. The Terminus cult killed cleanly, simply for meat but the Wolves appear to be far more brutal and murder rather unnecessarily. As Daryl says in Season 4 ‘it’s only the bad ones that survive’ hence these sorts cults may be increasingly common in the world of TWD. This particular cult seems to be based on the Native American belief that ‘the first people were wolves transformed into men’ and presumably that mankind, Walker or not, is inevitably regressing to back to the Wolf. These two Wolves may have had their arses handed to them but now that they know of Alexandria, the whole pack will certainly be coming for Rick and his group.

The last time we saw Morgan he was in a grief induced madness after the loss of his son Dwain. Obsessed with ‘clearing’ the Walkers from his town, Morgan appears to have lost the plot; he even stabs Rick, believing him to be an imposter wearing Rick’s skin! The Morgan of Season 5 could not be more different. He is finally appears to be at peace and exudes calm confidence, easily dispatching the Wolves with his staff and then placing their unconscious bodies in the safety of a car. Morgan is clearly focused on getting to Washington and finding Rick Grimes, confirmed when he reveals a note originally from Abraham to Rick concerning their intentions in Washington.

Rick is just beginning to find himself again after appearing to get dragged down to the brutality that surrounds him. Morgan’s presence at Alexandria is likely to accelerate the return of the Rick Grimes we know and love. Given Morgan’s apparent character development plateau I don’t think he is likely to stay in the show particularly long but Lennie James, who plays Morgan, has confirmed he will feature in at least one more episode. I’m sure we all want to see more of those Ninja turtle skills in Season 6. Interestingly, Lennie James revealed he was trained for six months by the original actor of teenage mutant Ninja turtle Donatello, so Morgan really is a Ninja!

It all kicks off in Alexandria in the finale. Viewers clutched their sofas in fear as we saw long surviving character Glenn fighting for his life after being lured out of the town by nemesis Nicholas. Thankfully Glenn eventually bests Nicholas and spares his life, even helping him back to Alexandria – good old Glenn! The residents are also finally woken up to the reality of the post-apocalyptic world when Father Gabriel fails to secure the gates correctly (or at all, let’s be honest!) allowing three Walkers in. Fortunately Rick realises and hunts them down, dramatically dumping one at the feet of the residents during the forum set up to debate his expulsion from Alexandria. The realisation that they are not safe, combined with Pete’s incensed killing of Deanna’s husband Reg using, forces Deanna admit they now live in a different world and she tells Rick to execute Pete. This is perhaps a meeting-in-the-middle for Deanna and Rick as Deanna is forced to accept that she must adapt to survive and equally Rick realises that changing the resident’s attitudes, rather than forcing their actions, is how they can all survive together.

This finale was potentially my favourite of all The Walking Dead finales, or episodes for that matter! It had some incredible zombie kills, for example Daryl’s triple kill where he uses a chain to smash Walker heads and equally Rick snapping a Walkers spinal cord by plunging his hands into its throat. We also see resolution of the various simmering subplots of Sasha, Gabriel and Nicholas, all of which ending in a satisfying manner. The audience were certainly treated with unusually simultaneous zeniths in many storylines. Unlike in the Season 4 finale or the Season 5 mid-season finale, we were left feeling refreshed and ready for the next challenge faced by the group, the Wolves, without lingering subplots. With Rick Grimes reunited with Morgan, Alexandria slapped into the present and the formidable Wolves closing in, I for one cannot wait for Season 6.