The Inbetweeners is one of the most beloved shows of British television’s canon. The painfully hilarious realism of the show offered a fresh counterpoint to shows such as Skins, whose indulgent, hard-partying characters gave viewers a fantasy of what could have been. The Inbetweeners exposed and celebrated who they were instead: socially awkward, know-it-all teens going through rites of passage such as being served alcohol to school trips to sexual mishaps. Everyone could identify with at least one of the boys, and its success was tied to the quintessentially British setting complete with drab lighting and teenage predicaments.

All of that was thrown away for the reunion show. Fans interpreted this reunion as an actual episode; personally, this is not the problem that I have with the concept of this reunion. The ire directed towards the actors seemed completely unnecessary considering that each of the four men would have scheduling issues and families to attend to in their lives. But the episode that the producers gave us instead was a very poor showing of what made The Inbetweeners so endearing to its fans. Utterly disconnected from its world, the reunion episode was unentertaining at best, and insulting at worst. 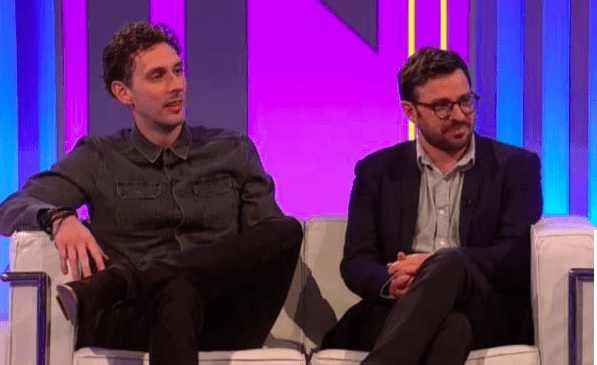 The first minute of the episode was a perfect example of how much of the rich universe of The Inbetweeners was ignored. Jimmy Carr hosted, introducing us with a series of jokes that felt better fit on other shows such as Big Fat Quiz Of The Year. The stage was surrounded in harsh, gaudy colours, reminding me of an ugly fusion between BFQOTY and Graham Norton’s chat show. Even recreating the sixth form common room on stage or an homage to it would have been a more welcoming setup. Nothing about the stage was even remotely connected to the show, which depersonalised the reunion into a generic and unoriginal chat show.

Features of the show included a history of the Inbetweeners (which dragged on for way too long) and a quiz featuring four superfans – the most fan engagement in a show whose success was so indebted to them. The show was so boring that even the four cast-members seemed as though they’d rather be somewhere else. Even visiting the school in the yellow Fiat couldn’t resolve the disaffection the boys had. Tension could be detected between certain cast members, and they barely got to speak for the better part of the two hours. When they did speak, the jokes were tepid. The editing was also rather strange, particularly when the actors retold a funny moment in rehearsal where they stuffed Joe Thomas into a suitcase. After the clip is shown, the boys carried on with a different conversation, until Jimmy Carr was visibly handed the same suitcase, and mid-conversation, he tossed it in like a dog’s toy. The boys robotically stuffed Thomas into the suitcase again, as if they’ve been silently instructed to. The timing was awkward, and it made for painful viewing. 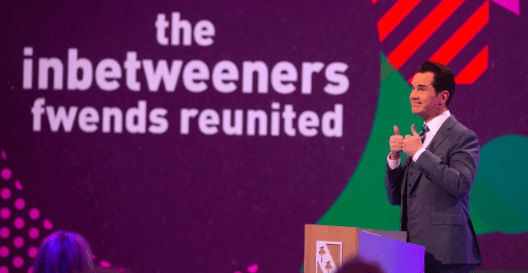 Jimmy Carr appeared to be the wrong choice of presenter for the show, and often seemed to be trying to steal the limelight. Image credit: Reality Titbit

The awards ceremony was also a let-down – nothing was particularly specific to The Inbetweeners, and those invited to present the winners were barely connected to the show. Katherine Ryan, Frank Bruno and Peter Andre were somehow roped into presenting awards – at least Zawe Ashton had worked with Thomas in the show Fresh Meat. (The Derry Girls had obviously been invited to promo the new show despite having zero connection to the boys). There was an unsettling predictability around the winners, with each of the boys winning an award each. The categories were also questionable – whilst the Best Parent’s Scene could have been forgivable, the Best Action Scene was confusing, and the Best Teacher was completely pointless and should have been left out. After all these quiet wins with barely excitable acceptance speeches, the best fan-voted moment (the classic “bus wankers!”) seemed to almost fade into the background.

Although I’m not a British teenage boy, I always enjoyed the show because of the immense warmth between the four teenagers. Sure, they wound each other up all the time, and frequently got annoyed with their stupidity. It was the friendship between them that resolved their squabbles, and their commitment to seeing each other getting into trouble and misadventure. What I watched tonight celebrated none of this warmth. Instead, it was a reunion episode that lacked heart, affection and attention, and it’s sad to see the history of The Inbetweeners fizzle out on such a disappointing note.