The Day is Breaking on a New Age of Teen TV

We are living in a fast-changing world, where every day more and more people are standing up and speaking out about what they believe in. A large part of this is taking action against world-wide problematic matters and looking towards a future. Even making sure we have a future. However, much of TV has not really caught up to comment on this. Whilst shows like Blackish and its spinoffs are making cultural tidal waves, we see most of these programmes are still focused on adult audiences. As for adolescents and children? Shows aimed at us often portray diluted versions of activism or go on absolutely wild tangents which completely distract from positive messages (see Netflix show Insatiable). Daybreak, on the other hand, does not choose to do this and instead manages to be one of the first shows which is changing the genre.

It’ll come as no surprise that this show was produced and made for Netflix. They released the first series of 10 episodes on 24 October 2019. It takes place in Glendale, California (a suburb of Los Angeles) in 2019. When you google the show, the description you get is‘Navigating a post-apocalyptic world full of zombies and “Mad Max”-style gangs, a teenage outcast searches for his lost love.’ I have got to say, the show does indeed follow the trope of an average middle-class white boy looking for his damsel in distress, who is also a white girl. (Though he is an immigrant from Canada) 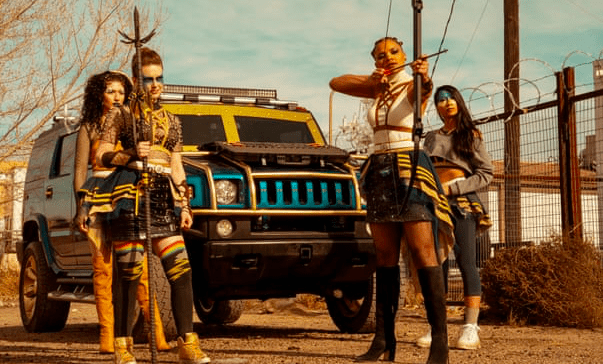 Ursula Coyote/Netflix Available on The Guardian under Creative Commons 2.0 License.

However, before you dismiss the show, know that the promotional material is all designed to make you think that there is nothing very different about it. In the first episode, we have Josh, our Canadian boy, explain to us what is happening in a very Ferris Bueller way (Matthew Broderick even stars as the high school principal). Essentially, all the countries in the world decided to nuke each other, and this is what’s left. Those who ‘survived’ completely were people under 18 and then there are the Ghoulies. The Ghoulies are zombie-like creatures which all the adults turn into, and no one knows why. He also explains how all the youth have split themselves up into antiquated tribes such as Jocks, Cheermazons, Nerds, Stoners, etc.

Throughout the 10 episodes, the writers shock us as they combine comedy and drama to keep the show interesting, but also refuse to turn their backs on issues that teenagers live through. I am not talking about the ‘does my boyfriend like me?’ scenarios. If anything, Josh stands as the anti-hero whose key role in the plot is to show everything that is wrong with the Teen TV genre. However, as the show progresses we get to see the apocalypse from the eyes of many of the equally important characters. But the show chooses to highlight everyone, even in small ways, to show their importance and how they can all be important in the actions which will lead to survival in the post-apocalyptic world. They are all individuals who have their own problems, their own stories, their own significance. 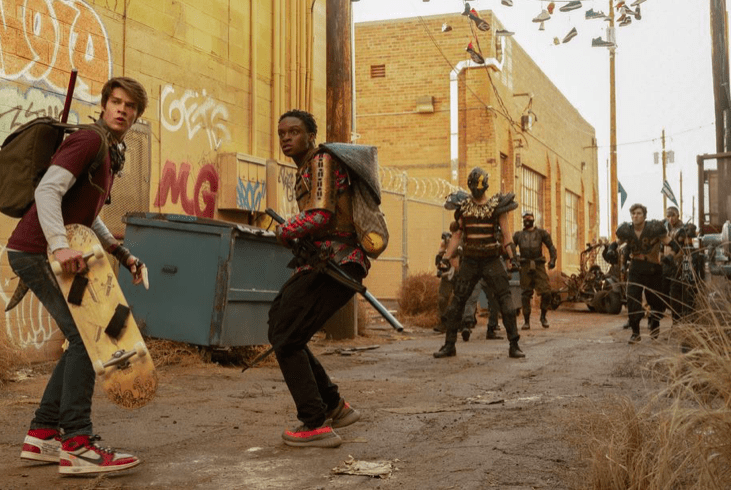 One important aspect I do want to draw on is how the show really focuses on the youth, and how they are going to change everything. The adults are shown to have messed up to the point of no return and, in a way, it is perhaps foreshadowing of what is going on in the real world with the Climate Crisis. Furthermore, the show discusses inherent racism- an issue which most people just ignore, and draws upon many other societal issues which exist that no one is trying to fix. It discusses refugee/immigrant struggle, racism, peer pressure, LGBTQIA+, cyber bullying, feminism – and the list goes on. It’s almost overwhelming in the sense that you are faced with all the bad in the world but the setting of the apocalypse with flashbacks galore is perfect in my opinion, because it’s showing audiences that these are not just dystopian issues, these are NOW issues. But, at the same time, none of this distracts from the show’s plot, or even feels like the show is just 10 episodes complaining about the world.

Apologies for not saying more but, in earnest, to say more would ruin the first-time-watching experience as this show takes you through plot-twist after plot-twist. No one is as they seem at the start. The only thing I ask you to remember while watching it is that the purpose is to be satirical, it’s designed to make fun of a genre which has barely changed over the last 20 years.