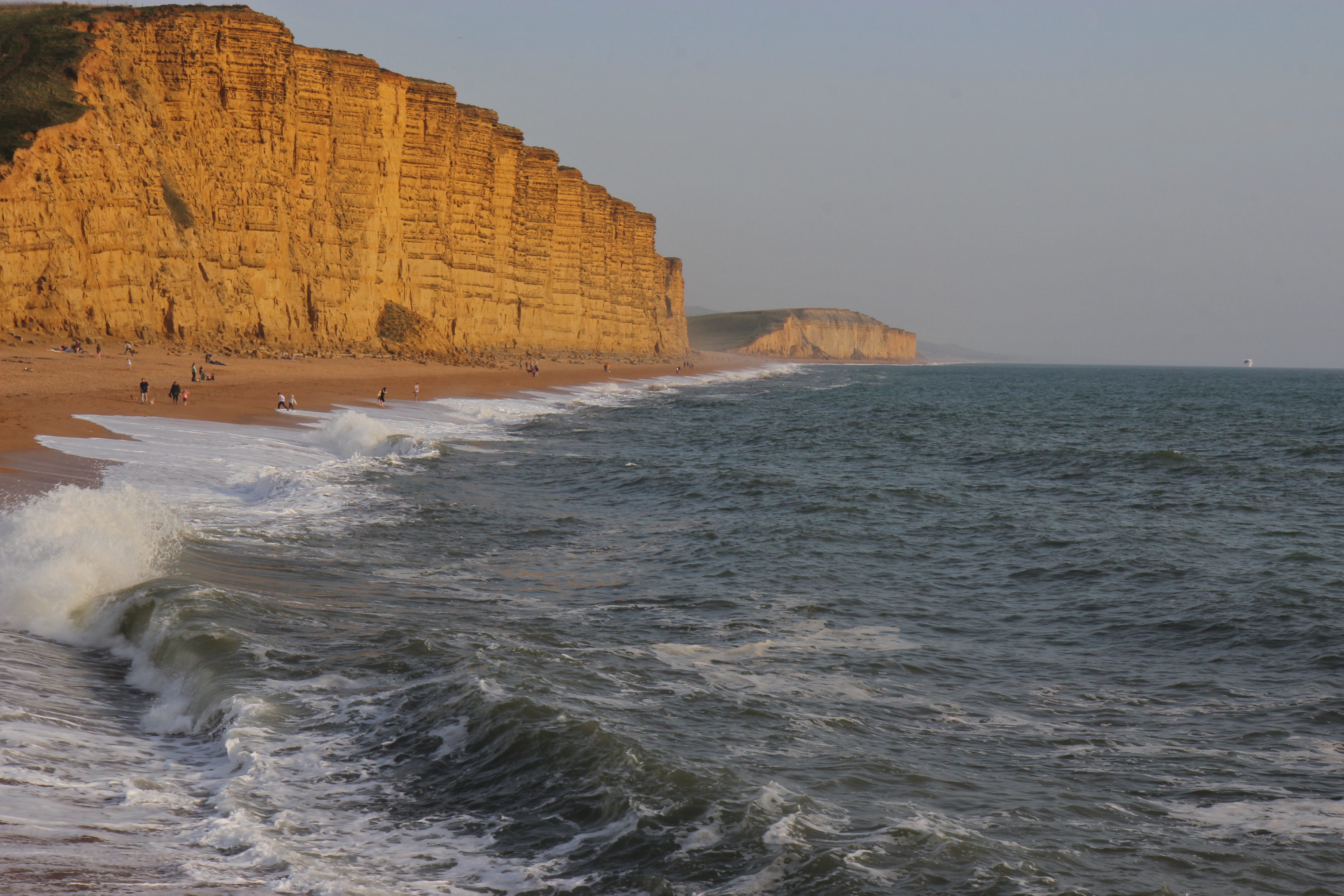 The scenic setting of the tragic death of Danny Latimer.

January saw the BAFTA winning, original British crime drama ‘Broadchurch’ return to our screens on ITV1 in the form of Season 2. The first season brought us along for a sofa-clutching ride through the murder investigation of teenager ‘Danny Latimer’ who is found lying dead on the local beach in Episode 1. The investigation, lead by DI Hardy (David Tenant) and DI Miller ‘M’llarr!’ (Olivia Coleman), leaves no skeletons in their closets as it picks apart the secrets of the little seaside town. We are forced to suspect almost every character of the murder until we are left with some pretty unlikely suspects, *Spoiler alert*! The series ends with a dramatic (but foreseeable) twist as Ellie Millar’s Husband ‘Joe’ hands himself in after turning on Danny’s missing mobile phone. Joe later confesses to the murder in custody finally drawing the case to a close…or so we thought.

To the dismay of the Latimer family, and admittedly myself, Season 2 begins with Joe choosing to plead ‘not guilty’, plunging us into a raw and brutal trial. Running parallel to this is the resurfacing of the Sandbrook murder case, the reason why DI Hardy originally came to Broadchurch and a failure that still haunts him. With the final episode due to air on Monday evening, there are still many unanswered questions about the Sandbrook case and, of course, the jury’s verdict on Joe Millar. So with only one episode remaining to fill in the gaps, what burning questions do we hope will be answered?

The pendant was first mentioned in Season 1 by the local clairvoyant (I don’t understand either) who tells DI Hardy ‘She forgives you for the pendant’. This is presumably referring to how the theft of the pendant led to the collapse of the original investigation and left Pippa’s killer at large. This season Miller glimpses a picture of Claire wearing Lisa’s pendant and it later transpires that she and Lisa bonded over a mutual hatred of Pippa’s mum. Upon realizing Miller has seen the photograph Claire secretly burns it. Not only that but in the previous episode Claire admitted to stealing the pendant in the first place, but why?

1) To save Lee? Perhaps Claire was aware that the pendant would see her husband go to prison for murder and so stole it to save him. Perhaps Claire even left it in Lee’s car since it was her necklace at some point.

2) To save herself? Regardless of if Claire was truly involved in Lisa’s death/disappearance, the pendant could quite easily implicate her.

3) To protect a very much alive Lisa? Yes I said it; perhaps Lisa is alive and for some reason – possibly a murderous reason – has fled. The pendant might have threatened to uncover her role in the murder.

Unlike Pippa, whose body was found in a river, Lisa’s body was never found. DI’s Hardy and Miller followed the address found on a receipt to an old factory in which they find an ironically chilling, agricultural furnace. But is Lisa actually dead and if not then where is she?

1) Burnt to a cinder- The writers sow the seed that Lisa is dead and cremated but this is most likely a red herring. However it is still a possibility as they may be leaving the manner of the murders rather than the location of the body/person as the mystery.

2) Hiding in France- There isn’t too much evidence supporting this theory but I have a hunch that this is where it is going. Lee reminds Claire that he would be known by at least one person if he moved to back to France. None of the other characters have any reason to be in France and the fact that Lee went there after the original case suggests that this is where Lisa really is.

Bluebells keep being mentioned throughout the series and are arguably the most mysterious and ominous motif in Broadchurch. They feature heavily in the title sequence and are flowering in the woods bordering the river where Pippa’s body was found. Furthermore, Pippa’s dad Ricky has a painting hanging in his office depicting bluebells and, in a rather disturbing flashback, was shown to be playing in the woods along with Pippa, Lee and Lisa. The final bluebell mystery is the pressed bluebell sent to Claire. So what could be the significance of this ubiquitous little flower?

1) Lisa is buried or her ashes scattered under the bluebells- There would be a certain dark beauty to this scenario and is therefore a definite possibility. However I personally feel it is a little bit obvious for Broadchurch, since they love a good twist.

2) Pippa was murdered amongst the bluebells- Perhaps the woods were a favorite playground for the neighbors and a game got out of hand. Was this why Ricky has the painting and why he/Lisa may have sent the bluebell to Claire as a reminder?

Sandbrook suspects and Broadchurch bets for the finale

The Sandbrook case is very complicated and it is difficult to imagine how it can be resolved convincingly yet still be surprising enough to replicate the thrill of the previous finale. I will however outline what I feel approximates to the best guess for the finale. As with the rest of the points raised in this article I will be assuming a fair amount of prior knowledge from the reader (mostly because of the outrageous network of affairs!).

Hypothesis: Both Lisa and Cate are having independent affairs with Lee. Pippa happens upon Lee and Lisa together in the woods and is somehow killed. Her body is thrown in the river and Lisa and Lee head back to Ashworth’s house to clean themselves and the house of any evidence. Claire is still oblivious to the murder so Lee drugs her using the date-rape drugs given to him by Ricky thus enabling him to meticulously remove any evidence. Lisa flees to France but her necklace, given to her by Claire, is in Lees car from a previous encounter. Thinking that this is proof that Lee has murdered both missing girls DI Hardy moves to arrest Lee. By this time Lee has told Claire that Lisa has accidently murdered Pippa and so Claire moves to remove the evidence implicating the love of her life. Later fearing that Lee may actually be the true murderer of both girls Claire goes into hiding with DI Hardy.

This is just one of many possible outcomes and the writers themselves have filmed several endings in order to preserve the finales secrecy so who knows? There are a few problems with the story outlined above such as the bluebells sent to Claire, and one could quite easily swap the role of Lee for Ricky and to a lesser extent, Lisa for Claire. I for one can’t wait to see how it all fits together.

When the penultimate episode ended before revealing the jury’s verdict my housemates and I were left pretty stressed! Could Joe really get off with it? I think the answer is yes, but briefly. The writers would not be kind enough to simply give us a happy ‘Guilty’ verdict and personally I don’t think there is enough evidence to do so, once you retract the confession. However, it would be pretty outrageous if the Broadchurch killer is not behind bars by the end of the second season so here’s what I predict.

The Jury will reach the decision of ‘Not guilty’ at which point all hell breaks loose, leaving the Latimers distraught and Nige and Ellie shouting at Joe. I believe that under the colossal pressure of everyone he knows and the guilt of what he has done, Joe will confess. After all, we are led to believe that, despite killing Danny and his strange paedophilic ways, he really does care about all the people whose lives he has affected.

I suppose all will be revealed Monday at 9:00pm; Broadchurch, don’t let us down!