Isabelle Pallier in Television on 20 November, 2015. 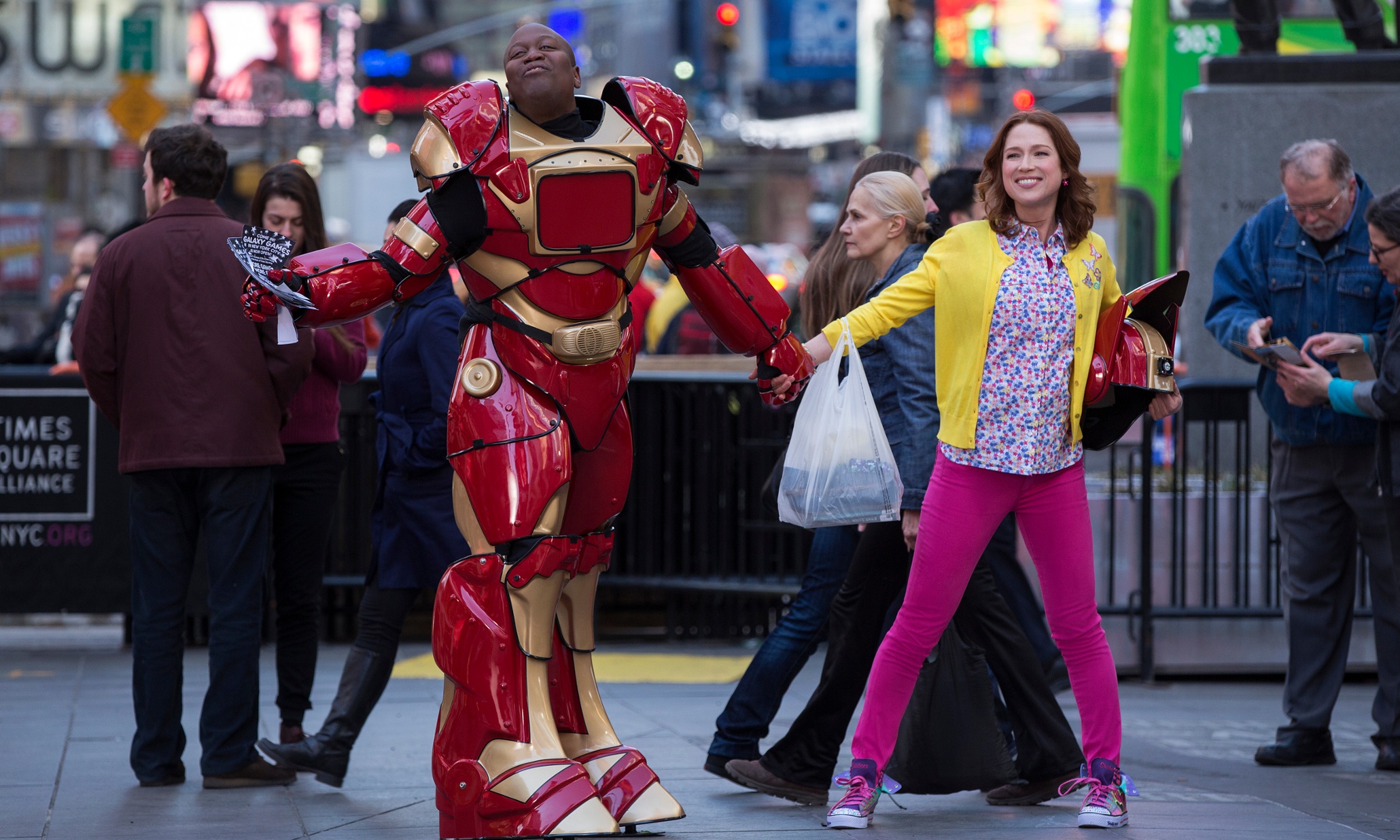 Unbreakable Kimmy Schmidt is a thirteen-episode original Netflix series. At first glance a bright comedy of your typical naïve 20-something ‘finding themselves’ in a big city, its colourful aesthetic belies a gritty story about surviving trauma. Kimmy is one of four survivors of an underground apocalypse cult, set free into society after 15 years, and is faced with the dizzying absurdities of modern-life, in New York. Directed by the brilliant Tina Fey, it is filled with ironic stereotypes, polarising characters and has, quite possibly, the catchiest theme song of all time.

Instead of returning to Indiana, Kimmy evokes the finding yourself cliché, by starting a new life in New York. She soon acquires a two metre-squared room in a basement with Titus, a struggling theatrical singer. Typical of her tendency to be easily pleased, she is delighted “A window. My own window!”. After finding a job as a child-minder for an obscenely rich family, Kimmy begins work under the botoxed gaze of Jacqueline. Jacqueline makes her position quite clear from the start; “I’m not running a charity here, except the one where I donate my old towels to poor people with the same initials as me.” Kimmy navigates her way through this life; making a birthday cake both cute and paleo, waking Jaqueline up at 10 am every morning without actually waking her up whilst also trying to convince everyone she is really quite normal. The childish naivety and boundless optimism she possesses is tested, destroyed and rebuilt episode-by-episode, amongst these polarizing characters, in a way that would seem formulaic, if it weren’t so hilarious.

The set-up allows a revealing insight into our bizarre modern-day obsessions, from a truly naïve adult experiencing them for the first time. Selfies, spiritual spin classes, and conversations based solely on emoticons are the start of a huge cultural adjustment she has to face. “I just want to be a normal person, and I can’t. I don’t know anything. I can’t tell phones from cameras. Even policemen have tattoos!”

After not seeing a mirror for 15 years, she learns how to take a selfie; “Hashbrown: no filter” and has a close encounter with a plastic surgeon, only to suddenly change her mind after seeing an advert for household air-freshener. The lesson? It’s better to face your problems them to ‘buh-breeze’ them.

As with many comedies, Unbreakable Kimmy Schmidt is filled with ironic stereotypes. Overall, the show pokes fun at humanity in all of its demographics, rather than targeting specific groups. In a moment of self-doubt, Titus exclaims; “Black, gay, and old? I’m not even gonna know which box to check on the hate-crime form”. Titus puts himself on the receiving end of his own jokes, confidently addressing stereotypes in an informed way. We also learn of his back-story and his endearing friendship with Kimmy. This said, some characters are presented solely in terms of these stereotypes, which could be deemed offensive. Dong, Kimmy’s potential suitor, is of Vietnamese nationality. He delivers Chinese food, takes GED classes, is good at maths and is almost deported mid-season for being an illegal immigrant. Whilst irony was the intention, it simply isn’t funny, and the character is one dimensional. I think the writer’s intention was to poke fun at racism in a satirical way rather than being racist. The line becomes blurred, when not approached in an informed and confident manner. Nonetheless, the show is only in its first season, and we could see some more interesting character developments to come.

Whilst Kimmy’s initial excitement and naivety about the minutest details, seems absurd and comedic, she learns to draw on this remarkable positivity in an appropriate way. It is a powerful message. At first, she is viewed as child-like and “basic”, but as she grows from her experiences, others begin to draw on her optimism. In a moment of inspiration, she tells Titus “We are going to pay the rent, I’m gonna get my job back, and I’m going to kiss a boy. And you are going to sing at the Grammys with Whitney Houston and Michael Jackson.” “Bad examples”, Titus shouts, above the roar of New York traffic, “but yes!”

Despite its colourful aesthetic, and a protagonist filled with endless optimism, the show has an undeniably dark and gritty storyline. This ‘paradox’ is not a surprise. Kimmy uses this positivity to cope with her trauma. As part of the underground apocalypse cult, she was held captive with three others by creepy, yet charismatic, Reverend Richard Wayne Gary Wayne. She has PTSD, something she copes with, ironically, through a cult-like spinning class, and has nightmares and fits of rage. She also has trust issues, and blocks out the people from her home town. Exploring these issues through comedy seems distasteful, but actually allows them to be transcended. Drawing on inner strength is a form of freedom; a theme cemented from the beginning when Kimmy emerges from the bunker Shawshank Redemption-style into bright sunlight. As she says: “The worst thing that could ever happen to me already happened to me.”

Overall, this is a very funny show, made possible by a brilliant writing team. It deals with dark, gritty issues, yet retains a feel-good optimistic quality. Be prepared to question modern society, if you haven’t already. And for those of you of the binge-watching persuasion, luckily there is only one season. For now.