Out of Her Mind – Terrific TV for Turbulent Times

When Sara Pascoe roller skates into the first shot of her new sitcom, wearing a holographic rainbow lycra unitard, and delivers the staggering statement, “My name is Sara Pascoe and I’m going to destroy your faith in love”, it is immediately obvious Out of Her Mind has big, bold aspirations. What becomes gradually apparent is that the form and genre of the sitcom itself is what Pascoe is determined to destroy, rather than the concept of love. For why should any media which emerges from the maelstrom of 2020 be anything but a complex, contradictory, hyperactive and hyper self-aware rejection of tradition?

By the mid 2010s the British sitcom was a barren region of television and then Michaela Coel and Phoebe Waller-Bridge entirely exploded the format with their groundbreaking creations. Consequently, sitcoms are now one of the most exciting areas of TV, increasingly dominated by female creators bringing fresh commentaries on love and loss, subversion of audience expectation, laughter and tears. Out of Her Mind, following Pascoe’s funny and – in parts – touching attempts to unravel her discomfort with romance alongside her dysfunctional family, has definitely earned its place amongst these invigorating productions.

Pascoe, playing Sara Pascoe, is a postmodern, Brechtian meta-master, jumping in and out of the action, across animation and live action to offer us quips, commentary and scientific analysis on the narrative. She kicks and kicks with glee at the fourth wall until by Episode 6 it is nothing but rubble under her triumphant feet. However, this is why, whilst Pascoe may be part of Waller-Bridge and Coel’s revolution, she is not shoulder-to-shoulder with these greats.

At the end of Out of Her Mind, I was not silently weeping or listening to my pounding heart, as I was with Fleabag and I May Destroy You respectively, I was confused. In a classic example of style over substance, Pascoe is overambitious and the exciting array of crazy costumes, strange sets and raucous music drown out the many uncomfortable but brave truths Pascoe explores around topics such as abortion, abandonment and cosmetic surgery. The focus on form eventually obscures the heart of the point Pascoe is trying to make about the futility and joy in loving others. The show’s exhilarating commitment to complexity is both its greatest strength and its biggest weakness. 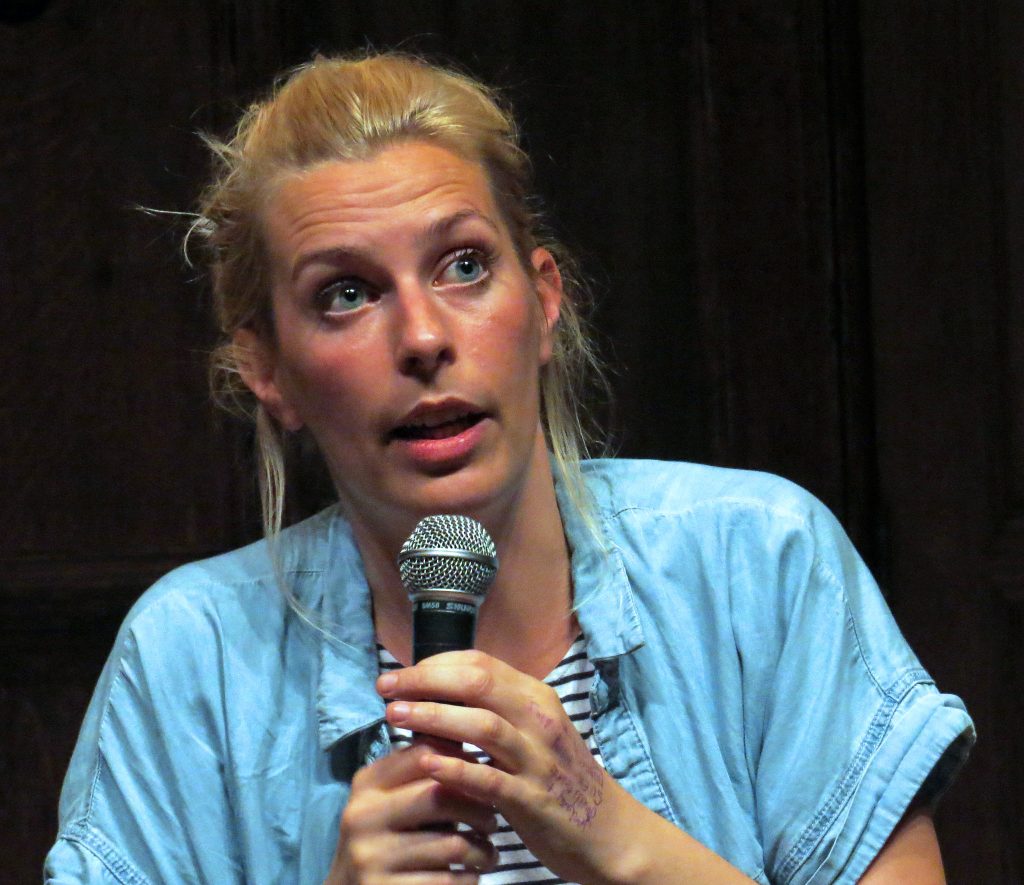 In contrast to the melodrama of the staging, the dialogue is delightfully deadpan, constructing witty and insightful observations of her character’s idiosyncrasies, the ordinary miseries afflicting them and their frustrations with Pascoe’s childlike persona. The fantastic cast really makes these quick, understated lines shine; Cariad Lloyd is Scoopy – Sara’s best friend – and has a wholly natural world-weariness, and Juliet Stevenson’s portrayal of Sara’s harsh, hilarious mother, who is either manically pedalling the exercise bike or knocking back a glass of wine, or both simultaneously, almost steals the show. Fiona Button as Sara’s sister Lucy has the hardest job – the straight man to Sara’s ridiculous petulance, enduring Sara’s endless frustration at her choice of conventionality, although she manages to deliver the most moving performance.

Unfortunately, all the supporting characters surrounding the central four women – perfectly complicated – feel disappointingly two-dimensional. They make brilliant cartoons, but cartoons are all they remain; the hippie Dad (Adrian Edmonson) repeating cryptic epithets – “there is no one truth” – and the Zumba teacher ex-boyfriend (Cian Barry) thrusting at himself in the mirror, encouraging his adoring middle-aged students. Perhaps, because the majority of the supporting cast are men, this is an intentional reversal of the usual model for screenwriting where female characters are peripheral and lack nuance.

This might be an interesting choice if it wasn’t for the fact the most tangential and unsatisfying role, entirely lacking in backstory, is the only speaking role for a Black woman. In another example of meta theatrics, Luna – played excellently by Cash Holland – appears wherever there is a customer service position to be filled and whenever Sara requires someone to talk exposition at. The existence of this character solely as a vessel for Sara’s frantic emotion is shocking, especially because these issues are directly addressed in the first episode.

Luna acknowledges, as all the characters regularly do, that she is in a TV programme, and her particular presence is apparently so the characters are “not all white people”. The following self-aware 30 seconds of discussion about how white dominated stories reduce Black characters into tokens are very accurate and intentionally provocative, but are also disappointingly representative of this sitcom, and so the joke crashes flat. I’m uncertain if it’s enough to make your characters acknowledge their problematic casting, even with tongue-in-cheek, and then just move on.

But Out of Her Mind is constantly moving; like the riotous Mariachi theme music it continues to accelerate, running along the edge of playful humour and real poignancy, almost always managing to stay effortlessly balanced on this fine line. It is intelligent, playful and uproarious, and in these bizarre times, maybe we need more absurd TV like this.