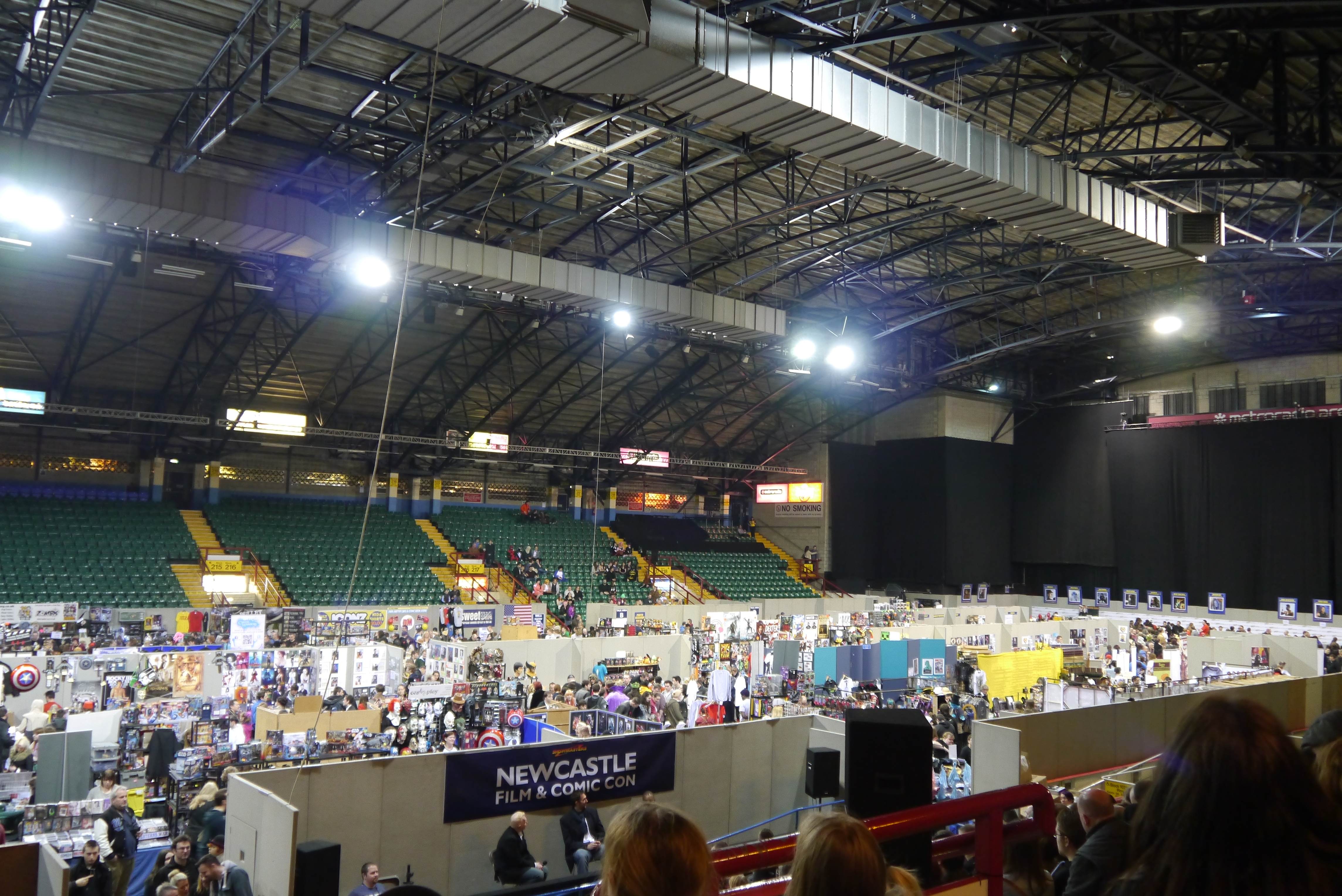 Last weekend was Newcastle’s first ever Comic Convention, and the two-day event saw the city’s Metro Radio Arena transformed into a den of time lords, ancient deities, superheroes, storm troopers and Disney princesses. More than five thousand fans came from across the country to see a guest line-up including Doctor Who’s Paul McGann and Sylvester McCoy (The Hobbit), Star Wars villain Julian Glover (Indiana Jones, Game of Thrones), Merlin’s Alexander Vlahos, The Lord of The Ring’s John Rhys Davis, and many writers and illustrators. There was a replica of the 1990s TARDIS console; there was an Iron Throne; there were photoshoots and autographs; there were stalls and stalls of wonderful merchandise. It was more than a fan’s paradise; it was a fan’s home, and as my first convention I can tell you it was one of the best and definitely strangest days of my life.

Media coverage of the event, however, has been surprisingly small, and focused solely on an unfortunate planning flaw that resulted in enormous queues leading into the event by early afternoon; the sum of all problems was that nobody anticipated just how popular the weekend was going to be. This negative perception does no justice to the convention itself: to the actors and writers who made time to attend; to the fantastic cosplayers; to the internal organisers involved in keeping the wait for autographs and photoshoots down (which were far more reasonable). As such I write this article to share just how very much worth it the day was. I write because I had a day that I shall remember as long as I live, and know that a thousand others did too; because I want recognition of its success enough to ensure that such days can continue to exist.

As such I present five reasons why Comic Con Newcastle 2014 – and, I suppose, cons in general – was amazing, why it needs to happen again, and whether it’s for you if it returns next year. 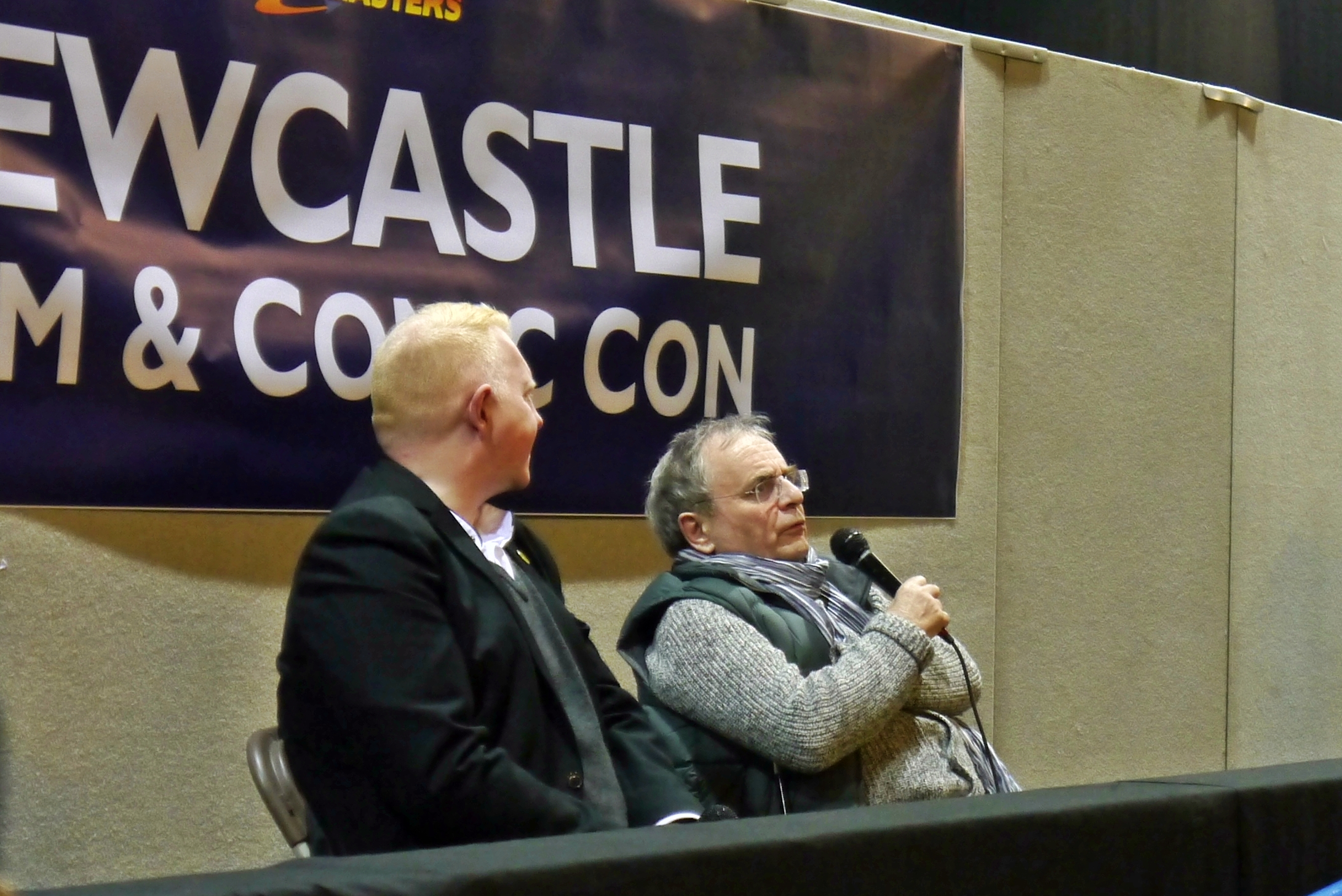 Sylvester McCoy recounting a time he was stopped for having too many people in his car: “What do you think this is, the TARDIS?” demanded the policewoman, before she realised… (source: author photo)

There is little so gratifying as meeting people who not only recognise that your strange necklace is in fact a TARDIS key, but also to which Doctor it belonged; getting into conversations over the key’s varying forms and their varying merits (I remain unashamed) with people dressed as that Doctor is better still. Conventions are pure community: the regular rules of social interaction break down, and wherever on the geek spectrum you fall you find yourself excitedly chatting with complete strangers, sharing passions, gushing theories and tales and opinions, forgetting all shyness. Cosplaying helps – while in the queue for a TARDIS photoshoot I went from distantly admiring a superb eighth Doctor to all but interrupting his conversation with a seventh Doctor to fangirl over his handmade sonic screwdriver. Soon the three of us were chatting away, and he even lent me the screwdriver for my photo.

The outfits were spectacular. I instantly regretted my natural aversion to fancy dress and wished I’d made the effort. Everywhere you looked there was an eighteen-foot scarf to be spotted, or pinstripe suits worn by men with spiked-up hair; you might spy Colin Baker’s eye-achingly flamboyant coat, or William Hartnell’s Doctor strolling superciliously past with his cane; the sheer number of fezzes present should have warranted its own collective noun. I saw Bellatrix Lestrange raising her wand at several Hufflepuffs; I saw Iron Man, Hawkeye and Black Widow stood tall before Loki’s outstretched spear; I saw Daenerys Targaryen, and Gandalf the Grey, and Supernatural’s Castiel, and Night Vale’s Cecil Baldwin, and Attack on Titan’s Levi; the Ghostbusters, Darth Vader, Deadpool, Spiderman, Disney’s Queen Elsa, Predators, Storm Troopers, bounty hunters, Wonderwomen, Poison Ivys, Clark Kents, everywhere you looked. One of my favourites was a full-body Dalek, who would sizzle to the floor in pain any time a be-fezzed child pointed their screwdriver its way.

So you’re in a relatively small area with a relatively high percentage of celebrities per mortal, and you’re also in a room surrounded by an awful lot of the things you likely love; weird things may happen as a result. For instance, after my photoshoot with Paul McGann I was sat cross-legged on the floor, blinking the anime hearts from my eyes, when something made me look up. Someone was walking past, one of the convention workers, and behind him…

‘Hello,’ said Sylvester McCoy, because I was staring.

…Once he had gone, the man next to me and I could not stop laughing. It was magical.

This is probably why you’ve come. It’s probably what you’ve been looking forward to for weeks. And it’s probably what you’re going to remember most when you head home, dizzy and dazzled. As I’ve said this was my first convention, my first time meeting any celebrity, and I was so nervous that I was shaking to my knees as I waited in the line for autographs. Meeting Paul McGann – ‘my’ Doctor – was rather like the first time I saw the Eiffel Tower: it didn’t matter how many photographs I’d seen, nothing before that moment had quite hit home how this thing really existed. Even seeing familiar faces like Julian Glover – baddie from Indiana Jones and the Last Crusade – was surreal, and I need say no more on Sylvester. These were people from another world: what were they doing in mine? How in the world does this photo exist, us stood together with his arm around me? Just to find yourself asking such questions alone is what makes going to a convention worthwhile; to find that the only way you can trust the incredibility of your memories is through photos and souvenirs, because it is nearly impossible to grasp that it really happened.

As a wise Time Lord once said, a man is the sum of his memories. At the end of the day, it’s what we all want. It’s what we work for, pay for, live for. At Comic Con, memories are definitely what you get. It’s been almost a week since Newcastle and my mind still wanders back the first moment my concentration slips; I still rave in ridiculous detail to anyone who asks about it, and to a lot of people who don’t; I can’t think of anything to compare it to. If you love stories, and you love adventure, and you love it so much that people think you’re weird for it, then Comic Con is your natural habitat. It’s certainly not for everyone, but that is the point: it is for the people who love a character so much they will spend months assembling their cosplay; it is for the people who wouldn’t think twice about the ticket price because they’re going to meet that one actor; who would stay up all night for a book release; who are too shy to attend even the Sci Fi Society; for the people who love something so passionately they are often afraid to show it, and be judged. Comic Con, as I have already said, is a home – a place to be yourself, meet others the same, fangasm without receiving a single odd look – and even if you’re put off by the thought of large crowds or long waits, don’t knock it till you’ve tried it; already I’m researching when I can do it again, and putting together a costume of my own, and cursing our May exam timetables for the days I’ll be missing.

If you fancy attending such a con there are always upcoming events. Here are a few: