Game of Thrones on trial: The Raping of Sansa Stark 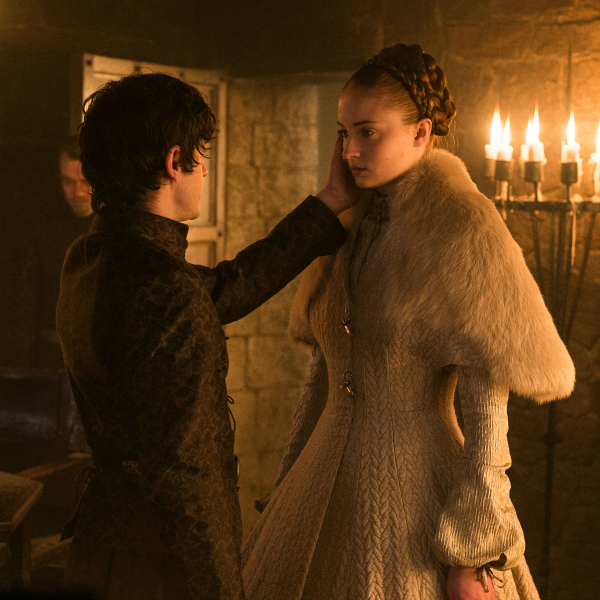 Once again Game of Thrones has divided viewers, this time through the rape of Sansa Stark by Ramsay during the consummation their marriage. Social media has erupted with a mixture of shock and praise for the show but also with accusations of unfair female portrayal, lines crossed and some feminist viewers are even vowing to boycott future episodes. The scene certainly makes for very uncomfortable viewing; we hear Sansa cry out in pain as Ramsay begins to rape her under the anguished gaze of Theon who is forced to watch. Many have suggested­ this is an outrageous and unnecessary undermining of a strong female character, reflective of typical sexist production of the show and poorly conceived. Well, I would argue that this scene – whilst unpleasant to watch – is logical, well-delivered and appropriate. I would even go as far as to say that the balance between female and male portrayal in this fictional show is fair but ultimately beside the point.

So did Sansa have the rug unceremoniously pulled out from underneath her blossoming character? Yes but as do many developing characters. One only has to consider Theon to learn how ruthlessly fickle their world is. Successfully taking Winterfell, Theon seems set to grow stronger but is rather abruptly handed over to Ramsay. Theon’s pride and manhood are stripped away and Ramsay destroys his humanity until he becomes Reek. Both Theon and Sansa are stifled at the level of the individual’s interest but certainly not in the long run. Moreover, I would argue that they increase the complexity of the plot by augmenting the storylines around them. Hence a better question to ask would be ‘Was this plot twist implausible and untrue to Sansa?’ As you might already have guessed, I do not believe so.

Although clearly maturing, Sansa has always been naïve and passive; a ‘bystander to events’ as Little Finger puts it. Although I would have been interested to see Sansa attempt to control Ramsay –indeed she briefly attempts to – for her to truly succeed would have been implausible. Ramsay is more intelligent, a military tactician, physically able and above all, psychologically formidable. Even if Sansa had somehow stepped up and made Ramsay ‘hers’, the two would have eventually reached the impasse of consummating the marriage which was never going to be pleasant with Ramsay involved. Hence I do not believe this was just rape for rape’s sake but also a probable outcome.

Furthermore, a majority of criticism centres on whether this event is unnecessarily shocking and a change from the book. Of course it was unnecessary but when watching a show where characters heads are often cut off or crushed I’m afraid this is what you sign up to – emerging strong female character or not. It wasn’t exactly necessary for the producers to extrapolate the storyline such that Stannis’s daughter Shireen is burnt at the stake but it is dramatic and sufficient to generate interesting consequential plotlines. Rape is by no means the most terrible event in Game of Thrones and the rationale of whether to include it in the show should rest within the framework of contextual likelihood and drama, not ‘necessity’ or adherence to the books. That said, these scenes certainly do require some decency and tact and in this regard, I think the producers of GoT have succeeded. The rape is mostly implied, with the camera mostly focussing on Reek’s face rather than Sansa. This cleverly couples Theon’s inner turmoil with Sansa’s distress whilst also impressing upon the audience the awfulness of situation and all in a visually discreet fashion.

More broadly there is the question of the general role of women in Game of Thrones and whether the inclusion of the rape scene just demonstrates the show is unfairly misogynistic. I feel this issue is complicated by the type of brutal, medieval world the show is set in. Women are concomitantly oppressed in this fictional world and it is down to the reader to acknowledge this as a circumstantial injustice. However, whether women are unduly brought low by males is very subjective. Personally I would argue it is pretty balanced; for example, Cersei is pestered to the point of less than consensual sex by Jaime but in a previous season she orders her cousin to have sex with her against his own wishes.

I can only speak for myself but I would hate to see the peculiar and provocative story of Game of Thrones censored by our own real life values and gender equality. GoT is not about tiptoeing through the story, only undermining female characters when necessary; it’s about excitement, tragedy and the slow, turning of cogs in the vast Game of Thrones machine. So to those outraged by the scene remember that Sansa is a rather small cog, her rape scene makes sense and should have interesting consequences for Reek and Winterfell. Simply embrace the madness until the point when you turn off the television and remember it is all made up.

First off I should say that I, and probably most of the people you will see objecting to depictions of sexual violence in mainstream TV shows, don’t actually believe that rape and assault should never be represented on TV. Far from it. It is imperative that we continue talking about these topics so that the myths surrounding sexual violence are busted and survivors get the help and understanding they so desperately need. What we’re really sick of is how sexual violence is rarely handled with the care and sensitivity that such an emotive and important issue demands.

I’d like to use Game of Thrones as an example as Sansa Stark’s “marriage” annoyed me so much that I’ve actually stopped watching the show. Now, partly this is an irrational emotional response because I sympathise a lot with Sansa and because as a book pedant I was irritated by the alteration to her storyline. But I also have serious concerns with how the show represented sexual violence in that scene.

Mostly, it is because this is just the culmination of a trend of how Game of Thrones has represented many of its female characters. Time and time again, rape has been added in to their plotlines (for example, Dany and Cersei’s) where it had been far more ambiguous in the books. This wouldn’t necessarily be a problem if these scenes had something clear to say about what these women go through, but often they are just added in without further discussion or comment, for the sake of shock value and drama rather than being truly essential to the character’s plotline. Not only does this trivialise sexual violence as a sort of background noise to the actual story, it does a disservice to the characters, needlessly placing them in the role of the victim without solid character or awareness-raising reasons. A misstep or two could be forgiven, but the constant treatment of the same issue in this way represents a serious problem.

Troublingly, many fans of the show justify these scenes by saying they are supposed to be a “realistic” representation of a highly patriarchal medieval society. Firstly, it is worth pointing out that finding women being treated well unrealistic while dragons and ice zombies are entirely par for the course says something about our society’s priorities when it comes to drama. But more importantly, just showing women being treated badly doesn’t necessarily make for a critique of it. Yes, some of the show’s female characters also fight against stereotypes and act with a decent amount of agency. But look at how the show treats the women who aren’t exceptional, the extras who constantly bare skin in order to liven up poorly written scenes of exposition and who are occasionally killed off in horrible ways for an extra thrill. Compare to Mad Max, where the sex slaves get to speak for themselves, rather than strip off so the camera can linger longingly on their naked bodies. We weren’t born yesterday. We can tell the difference between a feminist examination of women’s oppression in the Middle Ages and a thinly justified excuse to show more boobs.

The most clear-cut proof of how this argument is rooted in sexism rather than an attempt at gritty reality is that is almost exclusively used to justify the treatment of female characters. While it is true that sexual violence is alarmingly predominant among women, nevertheless if the creators were serious about “realistically” representing sexual violence in wartime, male survivors would be far more in evidence. You only have to read accounts of modern conflicts to realise that sexual violence is a tool of intimidation and terror used against defeated male enemies as well as women. It is also worth noting the difference with how people receive the few male characters who are sexually assaulted on the show. The horrific sexual abuse that Theon, for example, suffers is never thought of as routine and par for the course but rightly recognised as incredibly traumatic, unusual, and life-destroying.

But quite aside from all of this, the rehashing of this tired trope is just bad writing. With the introduction of a far more developed character to the Bolton plotline, and the increasing deviation from the books, this could have been a golden opportunity to do something truly interesting and new. Would it not have been interesting if Sansa had proved the stronger partner in that marriage, for example? Ramsay may be a dangerous, manipulative sadist, but Sansa is higher born, cleverer and has learnt how to play the game to perfection. It is not impossible to believe that she could have run rings around her husband. That would have been something truly original and a genuine talking point, rather than merely rehashing something cliché and sexist for the sake of titillation and controversy.