From page to screen: my favourite adaptations

Isabella Briers in Television on 20 November, 2020.

I am firmly on the side of the television adaptation. Yes, films work with a bigger budget and provide that stylish cinematic experience – some even capture the spirit of the novel well, considering time constraints. However, with television adaptations (where there is less pressure on writers to alter or condense a plot into oblivion) we benefit from exquisitely extensive detail and far more hours of enjoyment.

Below is a small selection of my very favourites. You might gather that I appreciate a good costume drama. ‘Oh absolutely! The ultimate form of escapism!’ do I hear you reply? I couldn’t agree more. 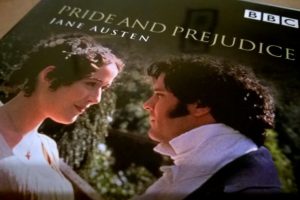 Starting off with perfection is a brave move to make. Just as the book is my comfort book, this is my comfort television series. It ought to be a truth universally acknowledged that the 1995 BBC adaptation is the superior adaptation of Jane Austen’s novel.

I first watched Pride and Prejudice at the age of six when my mum was doing her degree. One night, I came downstairs from a bad dream to find Lizzy and Jane out in their garden, picking flowers. Whilst I know that most of the wit probably surpassed me, I still remember being utterly entranced by the costumes and the dancing and the excitement of it all. The caricatures of Mrs. Bennet and Lady Catherine de Bourgh. The way Mr. Bennet’s character felt so endearing. The smoldering looks and wistful glances. And Mr Darcy. A figure who has undoubtedly become the pun of many a joke regarding my romantic life.

Notorious lake scene aside, this adaptation really is a visual replica of the book. Jennifer Ehle has gumption and spirit, but never loses her charm. I can never see David Bamber in anything without immediately shouting ‘MR COLLINS!’. And Colin Firth establishes the right kind of Darcy – the one viewed through Lizzy’s eyes. A Darcy who’s cold cynicism and arrogance gives way to awkward confusion at confronting his feelings – feelings which allow him to mellow into the definitive romantic hero. It may have led to several typecast roles later in Firth’s career (not that we aren’t grateful) but this seems a small price to pay for becoming a cultural icon. 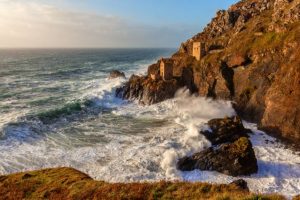 One of the beautiful locations featured in the series. Image by Tony Armstrong-Sly available on flickr.

Poldark first graced our screens in 2015 and stayed until the summer of last year. I love this historical drama for many reasons. The sweeping landscape shots of Cornwall are high up on that list. It really is a sumptuous feast for the eyes. (Not forgetting that Aidan Turner nearly broke the internet with a picture of Poldark scything in a field, somewhat unclothed) Poldark offers up an agonising love triangle, a medley of enthralling supporting characters, and an unflinching account of the miners’ ordeals. And in Demelza, I found a character who I wanted to emulate. Her grit, her feisty determination, and her unwavering kindness became the magnetic pull keeping me with the series, even when certain aspects of the plot might have become a little tiring (did I mention the agonising love triangle?).

It must be said that writer Debbie Horsefield took considerable liberties with Winston Graham’s book series – most noticeably in terms of Poldark and Demelza’s ages. However, the series did finish when the book content ran out. Poldark’s character was no exception to this battle between book and screen, constantly vying between being romantically Darcy-esque and utterly unlikeable. I certainly have my favourite moments and moments I’d rather forget, but the adaptation as a whole is delectably addictive and skillfully crafted to bring us all the joys and woes of a great drama. 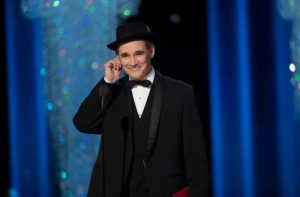 Mark Rylance at the Oscars. Image available on flickr.

It is quite some time since I watched this but I remember the impact it had, so I hope to do a re-watch over the Christmas holidays. I am quite a Philippa Gregory fan, so I came to Wolf Hall knowing that Hilary Mantel’s style would bring something different to my Tudor-costume-drama appetite. This drama does indeed have more weight to it, delving deep into the political goings-on with careful detail and constant attention to accuracy. There also appears to be more loyalty to the book it was based on than in many instances of Gregory’s work. By the end of the first episode, I was hooked.

It tells the story of Thomas Cromwell’s swift rise to power in Henry VIII’s court during his marriage to Anne Boleyn. Mark Rylance is an eerily brooding Cromwell, who glides around the palaces in shadow, subtly moving the chess pieces at play and always ruminating behind those beady eyes. Claire Foy’s cold Anne Boleyn is just as remarkable. Enigmatic and utterly unknowable, there is a deep-seated fortitude present in her every move. By the end, I could not feel empathy for her, only pity. 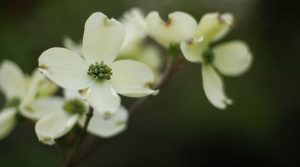 ‘Keep climbing into my head without knockin”
Image by Jeff Kubina available on flickr.

I was beguiled by this series before I had even heard it was an adaptation. I must say, reading (or attempting to read) the book itself afterwards was a really big disappointment. This may be one of those rare cases that English students do not like to talk about, where the book is inferior to the adaptation. I blame the lack of speech marks, Sally Rooney. Anyway, this was possibly one of the most talked about shows over the summer.

The intensity of the relationships, the truly superb use of passing time, and the phenomenal acting from Daisy Edgar-Jones and Paul Mescal, all culminated in a host of award nominations and an Instagram account for Connell’s chain. The music, too, was largely a fascinating success (but that didn’t stop some of us wanting to create our own playlists for the show). If you haven’t heard Dogwood Blossom by Fionn Regan, that ought to give you a perfect sense of this tumultuous yet tender relationship. I think it is genuinely one of the most visceral shows I have watched.