Isabella Briers in Television on 22 January, 2021.

(The following is a largely spoiler-free review)

If you watched the first series of this adaptation and, like me, had some reservations, I implore you to watch the second series. Now deeply into the heart of this complex story, series two is a gripping and exhilarating tour-de-force.

This series, largely based upon the second book in the His Dark Materials Trilogy: The Subtle Knife by Philip Pullman, sees us reunite with feisty Lyra Belacqua (Dafne Keen) and her daemon, Pan (voiced by Kit Connor) as they make their crucial first encounter with troubled Will Parry (Amir Wilson). The two phenomenal actors manage to keep up the pace and the tension throughout, despite having little chance to play alongside their adult counterparts, as in the first series. Keen’s ability to steal a scene with the concerned raise of an eyebrow remains captivating, and the blossoming friendship between these two protagonists provides a slow-burning gratification which will serve us well in the final series.

The two must battle with loss, time, and truth along a twisting journey this series, whilst being catapulted into the lives of new characters and new places by their preoccupation with mysterious Dust during their quest to find Will’s long-lost father. Cittàgezze is the third parallel universe to be revealed alongside Lyra’s and our own – an ornately constructed location (made in the production company’s Cardiff studios) with the look of a town in Tuscany, built upon a foreboding hill that has a deep secret at its peak. It contrasts brilliantly with the familiar order and architecture of Oxford in both Lyra and Will’s worlds. 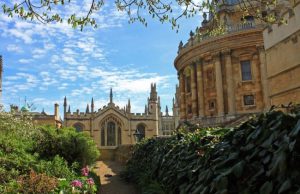 There was no doubt with critics that the first series, based on Northern Lights, was a remarkable improvement upon the ill-fated film adaptation The Golden Compass. Despite its glittering cast, the film failed to win over audiences with its chaotic approach to the rich, inventive, and finely-tuned world Pullman had created for the page. Now, with Jack Thorne at the writing helm, the series is overcoming such hurdles with an exquisite attention to detail and, crucially, far more time to play with. Book purists may find some slight changes made by Thorne to be disconcerting – Will keeping his mobile phone with him is one such oddity. But that does not mean that the cohesion of the show as a whole is in any way out of kilter. The story-telling is addictive, the special effects are vividly authentic, and the drama of episode four in particular left me with goosebumps.

Newcomer to the show, Simone Kirby, plays Dr Mary Malone perfectly. She captures Mary’s deeply empathetic spirit, unwavering sense of justice, and vast intelligence with skill and conviction, simultaneously capturing our hearts. It is reassuring to know that the role is in safe hands as it only increases with significance as we move through the plot. Additionally Fleabag and Sherlock star Andrew Scott plays Will’s enigmatic father, John Parry, who we get to see far more of in this series as he forms an alliance with the obscenely talented Lin-Manuel Miranda, in the role of charismatic aeronaut Lee Scoresby. Fans of Fleabag should listen out for John Parry’s daemon, as the voice may just be familiar. 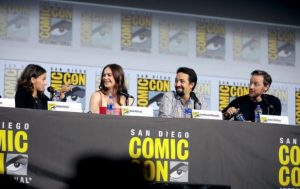 In the darker shadows of the show, we once more encounter the femme fatale Marisa Coulter (the criminally good Ruth Wilson) and her equally troubled golden monkey daemon. The curious relationship there is thankfully given more screen-time, involving unexpectedly heartbreaking scenes. Mrs Coulter continues to dig her claws deeply into the Magisterium and its frightening pseudo-religious power. Ironically, it is Dafne Keen’s father, Will Keen, who plays sinister Father MacPhail, an official with delusions of grandeur becoming dangerously intertwined with Coulter’s ambitions surrounding her estranged daughter and the truth about Dust. The disturbing and cunning figure of Lord Boreal, played by Ariyon Bakare, has a far larger role in this series too. The toxic dynamic between him and Mrs Coulter becomes increasingly gripping. And not forgetting the significant part played by the witches, led by Serafina Pekkala (Ruta Gedmintas) and Ruta Skadi (Jade Anouka) as they seek to protect Lyra and facilitate the dramatic prophecy attached to her very life.

Due to lockdown impacting the end of filming, an entire episode centring on James McAvoy’s Lord Asriel was unfortunately cut (miraculously the only real series casualty, that we know of). Whether we ever get to see what would have been remains doubtful, but his last-minute cameo is a thrilling reminder of the world-shattering tumult yet to come. A finale of epic and catastrophic proportions makes a fitting end to this series. The final moments may even remind the audience to breath after an hour of seat-edge viewing. It is almost painful to know how long we might take before expecting any more.

Finally, if you are not content with waiting the inevitably lengthy stretch of time between now and the final series, I would recommend the podcast Her Dark Materials on Spotify. Hosted by two friends/super-fans, the episodes explore the HDM books chapter by chapter, as well as special episodes and interviews discussing the television series. It is an indulgent extension of the imagination which can help with our patience in the meantime!

Feature image of the Northern Lights by Lenny K photography available on flickr.