Death In Heaven: what they got right

It would be very, very easy to write an article on everything that was wrong with last Saturday’s latter half of the two-part Doctor Who finale, Death In Heaven. Marking out the usual plotholes and Moffatisms alone could be an article in itself; discussing the at best disturbing and at worst disrespectful handling of the afterlife another; yet a third could focus on the continuing inversion of the classic writer’s law ‘show, don’t tell’ with the ghastly romance of Clara Oswald and Danny Pink, who make Anakin Skywalker and Padmé Amidala look positively electric.

But complaining is so exhausting. There is, after all, a reason why I and so many other underwhelmed Whovians continue to watch this more-often-than-not disappointing show; I should rather go in search of it, and take what I can with the praise it is due.

As such, there really is only one place to start. From discussions amongst both casual viewers and the darkest internet-dwelling Whovians, there appears to be absolutely no dispute on the matter: Peter Capaldi is one of the best things to happen to Doctor Who. In a series that has been nowhere near as challenging as he deserved, Capaldi’s performance in Death In Heaven had me mentally (and possibly physically at one point) punching the air for joy. One scene in particular stands out, the both epically delivered and — credit where credit is due — outstandingly written speech in which the Doctor confesses to being nothing more than an idiot with a box. Perfect! thought I, having prepared myself for yet another overly-dramatic speech Rings of Akhaten-style (this was the physical punch instance). After seasons of making the Doctor out to be some kind of textbook, righteous hero, here we have him saying what we have been waiting for: that he is nothing so simple, or so boring, as just a hero. A hero he unquestionably is, quite without meaning or wanting to be, but the Doctor is so much more than that, something unique and personal to each of us viewers that transcends standard definition — Capaldi lets us see this.

Yet another scene impossible to bypass here is the truly heartbreaking moment when we learn the Doctor is in fact lying to Clara, and that Missy — the Master — has lied about the coordinates of their missing home planet Gallifrey. One can imagine Capaldi bruising his poor hands something awful, so ferociously does his character hit the TARDIS console in his despair, and as the Doctor breaks down amongst his hundredfold dashed hopes, it is trying not to follow his example. 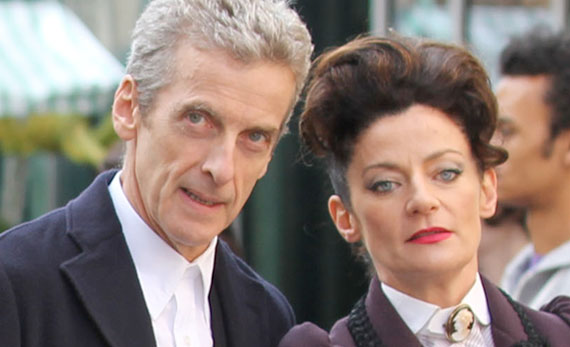 The Doctor faces his old enemy the Master, restyled Missy in a female incarnation, as she creates a Cyberman army out of every person that has ever died.

Moving on to the supporting cast, Michelle Gomez as the female incarnation of long-standing villain the Master is likewise an absolute delight to watch. While naturally decades of subtext between the two so-called best enemies could only be explicitly expressed the moment the chemistry becomes heterosexual, and naturally we have yet another flirtatious woman in black leaving the Doctor stumped for words, who naturally has to force herself upon him in a way that is viewed humorous and not as the unwanted sexual contact it is, the character of Missy is, in a word, fabulous. She revels in her newfound feminineness, dressing up and wearing make-up and testing out all the new charms of this unchartered form with gusto, while remaining the same creepy, melodramatic, attention-seeking old Master we know and love. Those wishing to avoid potential spoilers for Series 9 avert your gaze, but it has been confirmed that Gomez will be returning for next year — as if you hadn’t guessed that already, as this is the Master we’re talking about.

While Jenna Coleman and Samuel Anderson, as the painfully contrived lovers Clara Oswald and Danny Pink, barely warrant mention, the brief return of one of the show’s longest standing characters was by far the most emotional moment for many fans. Brigadier Alastair Lethbridge-Stewart, played by the late Nicholas Courtney, was easily considered the Doctor’s oldest human friend and one of his most beloved companions, appearing intermittently alongside almost every Doctor from Patrick Troughton to Paul McGann. The spirit of his character may live on in his daughter Kate Stewart, portrayed by Jemma Redgrave, but UNIT will quite simply never be the same without the dear old Brig; Death In Heaven gave us the next best thing.

To come full circle, there is indeed a reason why I and other often-disappointed Whovians continue to watch this strange and convoluted show; a reason why we never can quite give it up, as circuitous or recycled or basic as the plots may become; why we still feel that thrill of excitement as we hum ‘doo-eee-oo’ with the opening credits. The reason is simple: we love the story. Not the plot, mind; not the overarching theme of choice for the season that will be more or less ignored until the finale, and only hinted at in ten second-long epilogues across a handful of the generally stand-alone episodes. No, we still watch Doctor Who because at its heart, almost fifty-one years on from the moment William Hartnell first stepped out of his battered old police box down Totter’s Lane, this remains a story about one mad idiot — one mad, eccentric, excitable, magnificent idiot, and the bright blue box within which he keeps the whole universe. How can anyone resist a story like that? When will there ever be a time when such a man and such adventures will not capture hearts and imaginations, not inspire generations to look up at the night sky and wonder where they would go, if they could — what they would do, if they could live just one day as the Doctor does.

Basically, we’re stuck with this wretched, wonderful show whether we like it or not, so why waste our energy on complaining — at least we’ve got Capaldi.

If you can’t wait until the Christmas special:

— Doctor Who will be appearing in Comic Relief tonight on BBC1 at 7.30pm; in 2007 we were treated to a meeting of the Fifth and Tenth Doctors, so here’s hoping for another suitably timey-wimey adventure

— Today marks the one-year anniversary of Paul McGann’s devastating return to our screens as the Eighth Doctor in the webisode The Night of the Doctor; go watch it!

— The 23rd November will be the 51st anniversary of the show’s release; wear your best Tom Baker scarf on the day and enjoy exchanging surreptitious nods of respect with strangers

— Alternatively, if you want the real thing, go and actually meet Tom Baker on the day: he will be around at the Timey Wimey convention in Barking giving talks photographs