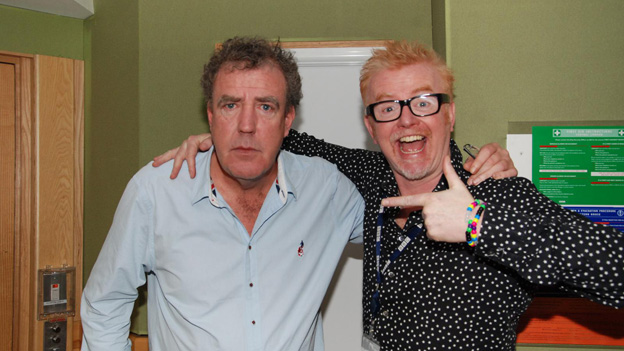 Best friends? Clarkson’s decline has led to a new opportunity for Evans, who will present and produce the whole new Top Gear.

Well the moment has finally arrived – the moment all Top Gear fans have been waiting for since that fateful ‘fracas’ in March. The new Top Gear team has been (partially) announced. Chris Evans (not Captain America – the one from Radio 2 and sometimes The One Show) will be the main host, taking Clarkson’s place, while the other (probably) two presenters will be selected from an audition process open to all car enthusiasts (see comments for details of how you can apply). Filming is due to begin shortly, but the question remains – Will the new Top Gear live up to the standards set by Hammond, May and Clarkson?

I used to be an avid Top Gear fan – I spent my teenage years watching reruns on Dave, despite a severe lack of interest in cars. A particular highlight from the Clarkson era for me was a challenge to build an amphibious vehicle, which ended with Hammond stuck in a lake, Clarkson’s (actually decent) motorized pick-up truck overturning at the final post, and May, the final winner, taking an age to navigate his creation to shore. Another memorable challenge was when the trio attempted to make a convertible people carrier. Despite starting well, the invention unfortunately caught fire while in a car wash, causing the three presenters to run away for fear of the repercussions.

Clarkson’s days on the show were numbered after several incidents of alleged racism. First were the Mexicans, who he repeatedly described as lazy during a Top Gear special set in Mexico, saying, “The ambassador is going to be sitting there with a remote control like this [snores]. They won’t complain.” Next, he called his new (black) dog Didier Dogba – a name which many assumed was chosen because his colouring matched that of the famous footballer, Didier Drogba. In May 2014, unused Top Gear footage was leaked which showed Clarkson muttering the ‘N-word’ while reciting the poem ‘eeny, meeny, miny, mo’. The culmination of such incidents had brought Clarkson to his final warning with the BBC, putting him in an even more vulnerable position when the ‘fracas’ occurred.

As popular as Clarkson was, there was no defence for his actions in March. It was absolutely essential that the BBC uphold their moral values and end his contract. Violence in the work place is not acceptable in any career, particularly among those who hold such a prominent position in society. His dealing with the situation, however, has been commendable. He wrote, “It was the most stressful day I had ever had in 27 years at the BBC… But everybody has stressful days, and they manage to cope better than I did.” His twitter account this week also demonstrated a correct attitude to the situation:

Chris Evans was announced as the new host on Tuesday, despite having previously stated that he would not take on the role. He has said that his decision changed after Hammond and May confirmed their resignations, as it meant that he was no longer a pawn in the game. Instead he is able, with the blessing of the three ex-presenters, to take a fresh approach to the show, bringing his own ideas to the table. Evans has proved himself to be a good entertainer, and his knowledge of cars is extensive. There is no reason, therefore, to doubt that he will be an excellent host. A more concerning issue for dedicated fans will be the selection of new presenters.

Evans has confirmed that the new line-up will feature at least one female presenter – a move away from the previous ‘lad banter’ trend. Current favourites are Jodie Kidd and Suzi Perry, both of whom already work in entertainment and have vast knowledge of cars. Other possible candidates to fill the co-host slots put forward by bookmakers are Guy Martin, Philip Glenister and Dermot O’Leary. With filming due to begin shortly it won’t be long until we find out which, if any, of these get the call.

So the question is whether Evans will be able to maintain the popularity of the show. Fans will be pleased to hear that he intends to keep many aspects of Top Gear as we know it – the elaborate film sequences so crucial to the Clarkson era will remain, as will the ‘Star in a Reasonably Priced Car’ segment. So, for now, the answer is why not – Clarkson is not the only one capable of making a car show fun, and perhaps a bit of reshuffling and a fresh perspective will give new life to the show and add something different to the mix.