The premise of Five Guys a Week is like any other dating show: one woman spends a week dating several men and then, at the end, she picks her best match.

But there’s one small difference – she’s dating them all simulateously.

Oh, and they all live under the same roof – her roof.

Yes, you’ve read it right. Thirtysomething single mum Amy plays hostess to her five ‘boyfriends’ (as she herself jokingly refers to them throughout the episode) and one-by-one dumps them until she is left with a ‘winner’.

They all have breakfast together (cooked for Amy by her five suitors, of course) go clubbing with her in St Albans, meet her mum over dinner, have an awkward three-way candlelit dinner in her own kitchen…and then she picks her match.

Five Guys a Week is purely an amalgamation of every Channel 4 reality dating show. It has the playful flirting of Dinner Date, the orchestrated intimacy of Naked Attraction, the ‘hide-behind-your-cushion’ awkwardness of First Dates but also the dog-eat-dog competitive element of Couples Come Dine with Me. 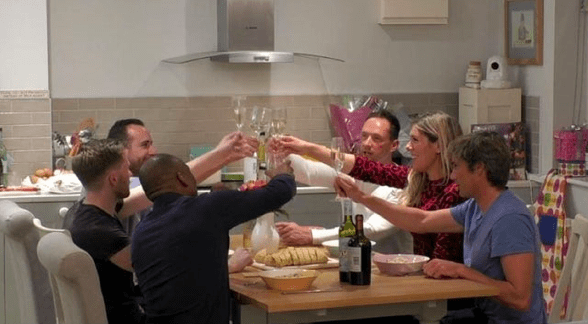 The men who walk through the door are the epitome of every stereotype known to Channel 4 dating shows. There’s Glen, a father of four who is still clearly brokenhearted about his recent divorce from his cheating wife of 18 years (which, of course, he brings up at the dinner table on the first night). There’s Michael, a Hollywood stuntsman who enlightens us with the struggles of urinating whilst wearing Storm Trooper costume. Trystan, a surfer from the Canary Islands sporting a Justin Bieber circa 2010 haircut, who wants a ‘princess with nice table manners’. Banking troubleshooter Christian, who claimed himself to be extremely financially stable with a decent retirement fund in his early 30s (well, his coat alone is worth £1,100). Oh and Scott, the former assistant bank manager who  ‘left’ his job and became a country and western singer. Probably best described by Amy’s friend – ‘The kind of guy who brings out a guitar at the end of the night even though no one asked’.

The show is wild. The boys sleep in Amy’s spare room and on her living room’s sofas, their cases remaining packed in case they are the next to go.

At one point in the show, three of the boys have dinner with Amy and her mum, who quickly turns the conversation from the tame ‘what can you offer my daughter?’ question to the slightly more uncomfortable ‘what are your sexual experiences?’.

It’s no surprise though that Amy and her chosen winner have already broken up. Unlike First Dates, the show’s producers don’t seem to have the ‘perfect match’ in mind. It’s just a bit of fun – a fantasy for some perhaps.

I have to admit; it’s absurd, but genius. Five Guys a Week might have just replaced Come Dine with Me in my ‘guilty pleasures’ spot.