Catastrophe: refreshingly frank, honest and down to earth 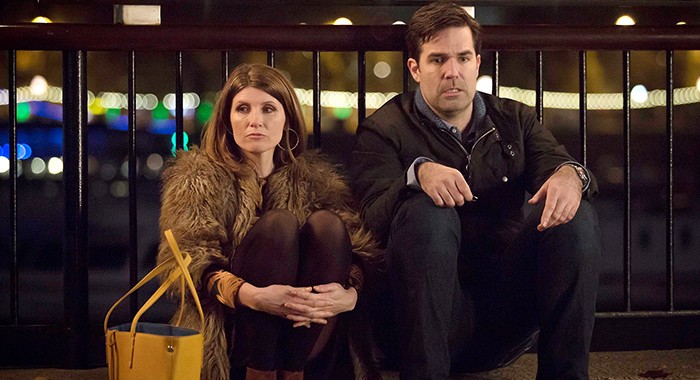 Catastrophe is the perfect remedy to banish those deadline blues! The show follows the hectic lives of Rob and Sharon, an American man and Irish woman, who happen to meet in a London bar. After four whirlwind days of casual sex and lots of laughter, Sharon, to their mutual dismay, finds herself pregnant. Even though they barely know each other, they decide to make a go of it!

Despite being thrust together under less that romantic circumstances the two middle-aged singletons fall in love, sharing a relationship founded on mutual wit, a flair for sarcasm (at the other’s expense) and shall we say ‘passionate’ sex lives! The show drastically sidesteps the world of romantic comedy as we know it. We aren’t drawn into the typical ‘will they, won’t they?’ storyline, in which our commitment to a series is derived from an inbuilt need to watch the two main characters unite at the end. In such cases, although the final reunion may be momentarily satisfying, ultimately we are left deflated – hours of dedication for a kiss and a striking pan over a city skyline. We never truly get to fully invade the lives of those we invest so much time in and feel we know so well. Catastrophe is the show that can deliver what audiences have been craving: an intimately close up, and yes unattractive, depiction of a real life relationship in all the pragmatic glory of everyday life. Romance is all well and good, however often it’s the mundane details we crave. Therefore, for me, a show based around the ‘post happily ever after’ moments is a far more satisfying and entertaining watch.

Life obviously isn’t perfect; often we may plan perfectly executed, cinematic versions of a particular encounter, yet in reality these ‘fantasy moments’ never happen or simply fall flat on their face. Catastrophe is romantic in the sense that it is scoffs at romantic cliché. Rob attempts to propose to Sharon in a conventionally romantic way: he plans to take her to an expensive and sophisticated restaurant, booking a prime table offering a stunning city view… you get the picture! However, obviously his plans fall spectacularly to pieces. The restaurant turns out to be noisy and impersonal, the staff are rude, the seat with a view is double-booked and so on. Having had enough, Sharon makes them leave, forcing Rob to pop the question on your average London street, and at one point actually picks up the ring from a puddle of wee! They both laugh it off and Sharon couldn’t care less. Finally we see an on-screen couple who simply can’t be bothered with the whole romantic charade. Ironically though, the show’s aversion to corny cliché only heightens the tangible on-screen chemistry between the two main stars. Sickly sentimentality is banished from the screen. In its place are refreshingly frank, honest and down to earth moments that are genuinely warm-hearted in their authenticity and awkward sense of realism. 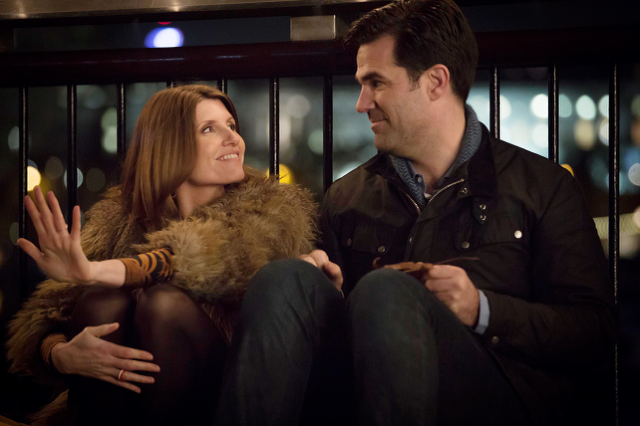 It’s the thought that counts.

Catastrophe is full of colorful, eccentric and brilliantly dysfunctional ‘friends’ and family that function to bring exasperation, humiliation and endless numbers of uncomfortable moments to Sharon and Rob’s lives. We experience the comedy as simultaneously hysterical and brilliantly cringing, a perfect combination!

The show was the brainchild of the two main characters Sharon Horgan and Rob DeLaney (for those who have twitter I would seriously recommend following him as he is one witty guy!) who are said to have taken inspiration from some of the events and experiences in their own lives. This is very apparent in the random, irrational, yet importantly feasible, experiences Rob and Sharon are continually faced with. Catastrophe highlights, with subtle genius, the insanity and irrationality that lies oh so close behind the façade of normality in everyday life!

Another aspect of the show that is paramount to its unapologetically down-to-earth feel is the graphic and downright filthy nature of the humour. I defy anyone to watch Catastrophe without laughing out loud at the riotous and shockingly crude one-liners that often find you questioning ‘did he/she actually just say that?’ Sharon is just as witty, even more frank, and definitely filthier, than Rob when it comes to sexual humour. For me this is a majorly satisfying aspect of the show’s dynamic and is generally a very positive and progressive step forwards for women in TV.

As you can probably tell, I am a fan of the show! It is genuinely a tour de force of comedy that will guarantee to brighten up even the rainiest of Mondays! Series 2 is currently airing on Channel 4 but you can get up to date by watching the first few on 4oD now. However, I would highly recommend watching the first Series before hand. Those who have Amazon Prime can fly through the six episodes (only 24 minutes long) in no time at all, trust me, they are highly addictive!