Isabelle Pallier in Television on 6 November, 2015. 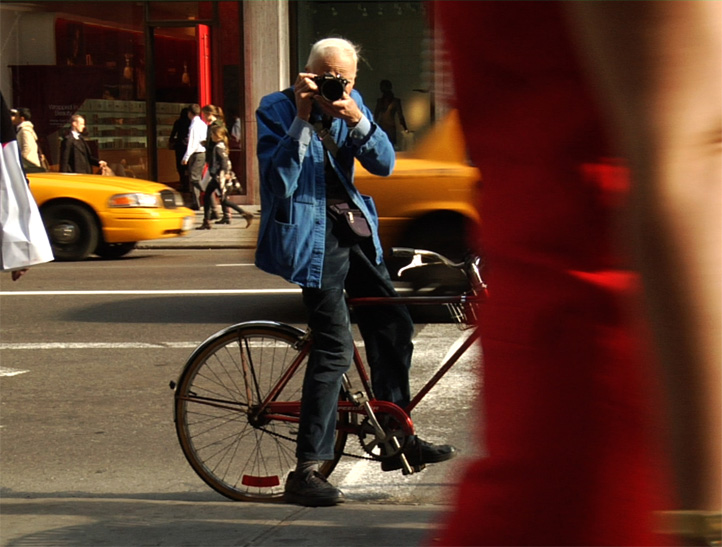 Bill in his natural habitat

Bill Cunningham New York is a documentary of a man photographing the vast spectrum of fashion in the city. Bill’s work focuses on three aspects of society: the catwalk, the charity events (socialite paradise) and the streets. The latter of which inspires his much-loved New York Times feature ‘On the Streets’, and is easily the most interesting. He showcases the innovative, colourful and intriguing styles spotted while cycling through the city on his 28th bicycle (the rest got stolen). This is not just a show about fashion; it is an insight into New York society, its fascinating characters, and the unassuming 80-something year-old who documents it all.

Since the 60s, Bill has been photographing fashion in New York. His career has been, coincidently, in sync with the emergence of street photography. His ‘On The Streets’ spread focuses on individuality and interesting clothing arrangements. He spots people who break away from the millions of other “cut-outs”, in what he sees as an improvement to a “dreary world”. In the 80s Bill photographed Kenny, a poetic artist, wearing a dress, to feature in the New York Times spread. It was rejected. But it reflects a man focussed on nice clothes rather than being politically correct at the current time. Anna Wintour, editor of Vogue, notes that he spots the clothes before many of the catwalk editors themselves, and everyone is delighted to be photographed by him.

“I like very simple, down to Earth, basic things” remarks Bill, the eponymous man who has singlehandedly chronicled the vibrant and dynamic fashion of New York for decades. This paradox, between the man cloaked in a twenty dollar anorak and duct-taped poncho, and the glamorous and colourful extravagance he seeks in his photography is intriguing. Aside from work, Bill leads a simple lifestyle, residing in a tiny apartment, primarily used as a host for rows of filing cabinets containing negatives of every photograph he has ever taken. The bed seems like an afterthought. “Who the hell wants a kitchen and a bathroom!”, he exclaims with glee, hard to do in the capitalist chaos of New York, yet nonetheless an excellent point. Bill shows that when you have found your passion, much of life’s concerns are frivolities. Co-Editor of Paper magazine, Kim Hastreiter remarks, “Bill’s fingerprints are all over everything he does. He’s never, ever, ever sold out one inch of anything.” Indeed, whilst leafing through some of his old publications with a friend, he imparts some passing wisdom; “You see if you don’t take money, they can’t tell you what to do, kid”.

Bill has become a legend of the city, however at contrast he is to its ambitious and dizzying frivolity. Yet he doesn’t dismiss the glamorous charity events and museum openings, filled with seemingly rich public-figures, in elaborate gowns and sharp suits. Whilst it may not reflect the ‘average person’, its still a real part of the social fabric of New York. Nevertheless, he often will only spend a short period of time at such events, never accepting even a glass of water. “It’s keeping a distance from what you’re doing, so you can be more objective,” he says. This seems wise in a city that is presented to be very pushy, socially. A young couple say to Bill after he photographs them, “We’ve got to be in it. We’re pretty good-looking people.” Indeed, a famous New York magazine headline goes “You went out last night. Nobody wrote about it. Do you exist?”

His reports are focussed on style, interesting clothes and creative daring, irrespective of social class. He is aware of New York’s social hierarchies and nuances, yet chooses to approach people in the same way, without preconceptions. Bill himself is from a conservative working-class family, and continues to live simply, despite living in one of the wealthiest cities on the planet. Whilst having a level of celebrity-exposure that would make paparazzi everywhere drool, he is not interested in the spectacle of fame and free designer clothes. Bill appreciates those with great style and creative daring, whoever they are. “We all get dressed for Bill”, says Wintour, on pretty good authority.

Towards the end of the documentary, Bill receives an honour from the French of ‘Officer in the order of arts and literature.’ Yet you wouldn’t know it. He spends much of the time in photographer-mode, snapping the assortment of important people in dresses and suits, there to honour him. When he gets to the stage he exclaims, “”I don’t work. I only know how to have fun every day!” This is somebody who has found something he loves to do and does it with no hint of an ego. However established the social hierarchy of New York is, Bill approaches it all on a level-pegging, solely focussed on artistic expression. Finally, he imparts on the audience “It’s as true today as it ever was, he who seeks beauty finds it”, his voice quivering in a rare display of emotion from a very private man. Whether you care for fashion or not, this is a vibrant documentary with some thoughtful insight.