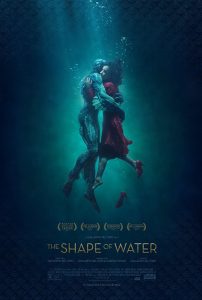 The question of what it means to be human is a recurring one in recent works of motion picture. Both hit series, Netflix’s Black Mirror and HBO’s Westworld questioned our previously held ideas of humanity within the context of technology. These two series portrayed machines and written computer codes as capable of behaving more like a human than actual human beings themselves, arguing that it is not the flesh and our biology that we value as the most precious asset in our humanity. There is something much more important in us that makes one a complete and valuable human being. Technology is not the theme of Guillermo del Toro’s newest film that was nominated for 13 Oscars, but it comes to a similar conclusion, and does it in an exceptionally beautiful way, resulting in a film that will not only rightfully stand a serious chance on this year’s Academy Awards, but will be remembered for years to come as one of the most beautiful love stories in film-history.

The stage is set for this love story to develop thanks to its uniqueness; the mute cleaner Elisa Esposito (Sally Hawkins) is living with Giles, a middle-aged, gay man (Richard Jenkins) during the height of the Cold War. She works at a secret facility lead by Richard Strickland (Michael Shannon) where a humanoid sea creature (played by Doug Jones and perfectly brought to life by the makeup and costume departments) is being held. Elisa and the creature soon start to get closer to one another, and develop a unique relationship. It is through this relationship that the film asks two of our biggest questions; what is love, and what does it mean to be human? 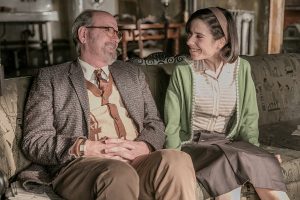 There is something inherently weird in attempting to answer these two questions, hence the grotesque nature of the story itself which is assisted by Alexandre Desplat’s perfectly constructed soundtrack, and Del Toro’s unique form of directing that hypnotizes the viewer into a dreamlike state. It is not just the setting and story that is absurd, but so are the characters themselves. Elisa is not only mute, but seems to be slightly child-like as well, the character of Giles, a failed painter who has countless cats, and is also obsessed with his hair speaks for itself, and Michael Shannon’s villain manages to bring the perfect parody and dark side of the stereotypical, overly masculine, 1960s American family man.

Shannon’s performance is captivating, however slightly one-sided. His character is the utmost evil, and even though it helps to demonstrate the film’s point as while The Creature is beginning to show signs of humanity Strickland is transforming into a monster both mentally and as the film progresses physically as well, demonstrating that it’s not the biology what makes a human, his character would have borne with more complexity. Especially as the other characters are well-written (maybe apart from Octavia Spencer’s slightly stereotypical mentor character, Zelda Fuller who lacks the depth of the others). The motivations of Michael Stuhlbarg’s Soviet spy are also clear and his dilemmas and loyalties are well-acted out too. 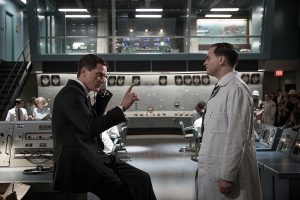 The most crucial part of a love story however, is the chemistry between the two leads which thankfully delivers as well. Despite having zero dialogue between them, the viewer cannot resist not rooting for the lovers as their chemistry is vibrant on screen despite the rather unconventional nature of their character. It is through their interaction that the film answers its questions; the mute Elisa and her band of allies made of other social outcasts; a black woman, a gay man and a Soviet communist prove their superiority of humanity by saving the Amphibian Man from the monstrous hands of the White, American, middle-class husband who was perceived to be the hero of his era. And the Creature and Elisa embody what love actually is. In distinction to the human couples of the film (the Fullers and the Stricklands) who while bear the official social status-symbol of lovers by being married show no sign of the deep emotional bond that the interracial couple have. This most clearly manifests itself in the contrast between the two sex scenes. While the Stricklands’ bedroom activity is fully shown and is depicted in an emotionless, rough and animalistic manner, only the romantic and tender lead-up to the first sexual encounter of Elisa and the Sea-Creature is shown on-screen, indicating the act’s intimacy that is exclusive between the two of them. 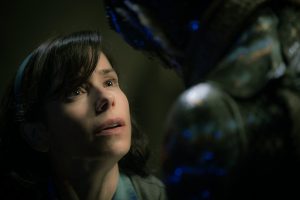 ‘The Shape of Water’ is a masterfully executed film about love and humanity that – while managing to reflect on the sexism, racism and homophobia of its era – turned out to be just like its subject material; weird, absurd and unlikely but that is exactly what makes it so beautiful.