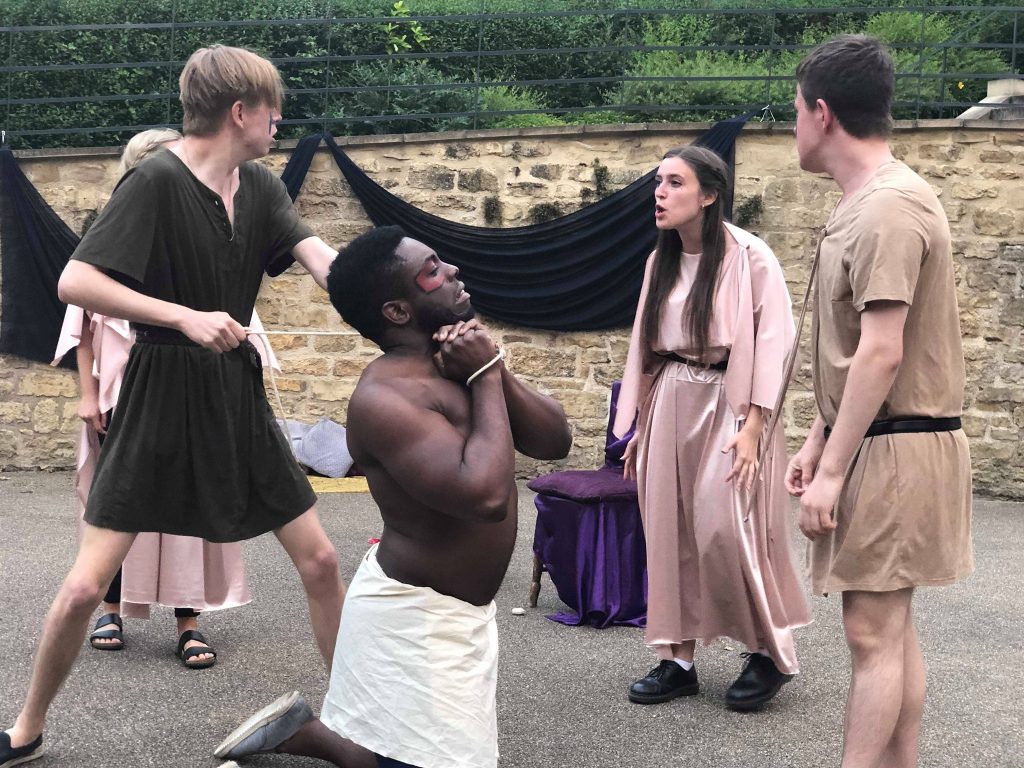 In their latest performance, directed by Tom Jacobs, DUCT presents ‘The Last Days of Troy’. A play written by Simon Armitage, which blends modern theatre and ancient mythology in a faithful retelling of Homer’s Iliad. DUCT appears to have fully embraced this production, and their hard work can be seen throughout their strong performance, which will entertain anyone – regardless of their familiarity with Homer.

Perhaps the most striking aspect of the performance was its setting: the Wharton Park Amphitheatre leant itself perfectly to the setting of the play, creating an immersive quality. The choice to perform the play outside, clearly embracing the opportunities of British summer, was especially brave considering the rain that plagued the set prior to the performance. However, due perhaps to some sort of divine intervention such as those acted out in the production, the weather was perfect, and the close proximity of audience and actors created an intimate feel which only added to the immersive qualities of the venue.  The other challenge of outdoor venues is background noise; however, this was handled well by the actors who overcame the sounds of traffic by adjusting their volume, without ever breaking character.

The stage itself was divided between two levels, making effective use of space. These distinct spaces were also utilised for narrative purposes, with the upper level acting initially as Olympus, home of the gods; a physical display of their superiority over mortals, emphasised as they looked down upon the struggles of man. On a less symbolic level, it later became the walls of Troy, creating a strong sense of dimension as we saw the royal family watching the war at their gates. The lower stage appeared to be subtly divided, with the Greeks usually confined to the audience’s right and the Trojans to their left. This clever tactic meant that the production could effectively use simple props, and still create the image of a distinct world in the minds of those watching, reminiscent of the tapestry woven by Helen during the play which also placed the two warring groups on distinct sides.

From the opening monologue delivered by Zeus (John Duffett, who stood out in this production with his versatile portrayal of Zeus which was interchangeably gripping and comical), the acting proved to be strong throughout. Despite some slips, particularly during the scene in which the wooden horse is discovered and discussed, the cast brought clear personalities, emotion and an appropriate level of comedy to their roles which is definitive proof of the successes of student theatre. Several stood out in particular: Tom Duckworth as Paris proved capable of rousing both laughter and empathy from the audience. And Harry Scholes brought a sense of wit to the part of Odysseus which blended nicely with his characterisation. The intimidating role of Helen of Troy was entirely successful due to the talents of Amy Porter. Managing to blend emotion and vulnerability with a fiery sass, whilst also bouncing off her fellow cast members extremely well in her every scene, Porter created a Helen who had a depth to her character and was unfalteringly immersive.

The costumes were executed effectively. The imitation of Ancient Greek dress was done simply yet successfully, and the use of a blazer to distinguish modern Zeus the as narrator versus the Zeus of the past was clever. Makeup was also used to give reflect the distinct identity of each character, and signalled allegiance: the gods having elaborate makeup with gold and gems, and the men of Greece and Troy having bold stripes reminiscent of warpaint (and indicative of their loyalty dependant on colour). Additionally, good direction and dynamic choreography for the exciting fight scene between Hector and Achilles – which made effective and dynamic use of the available space – brought a sense of professionalism and sophistication to this production despite the challenges faced in student theatre.

Overall, DUCT has taken an ambitious project and tackled it with a sense of creativity and talent to create a truly unique and entertaining performance. Their project has brought to life an ancient story under Armitage’s vision, whilst bringing their own flair to the play. This is a great piece of student theatre for which they should be proud.