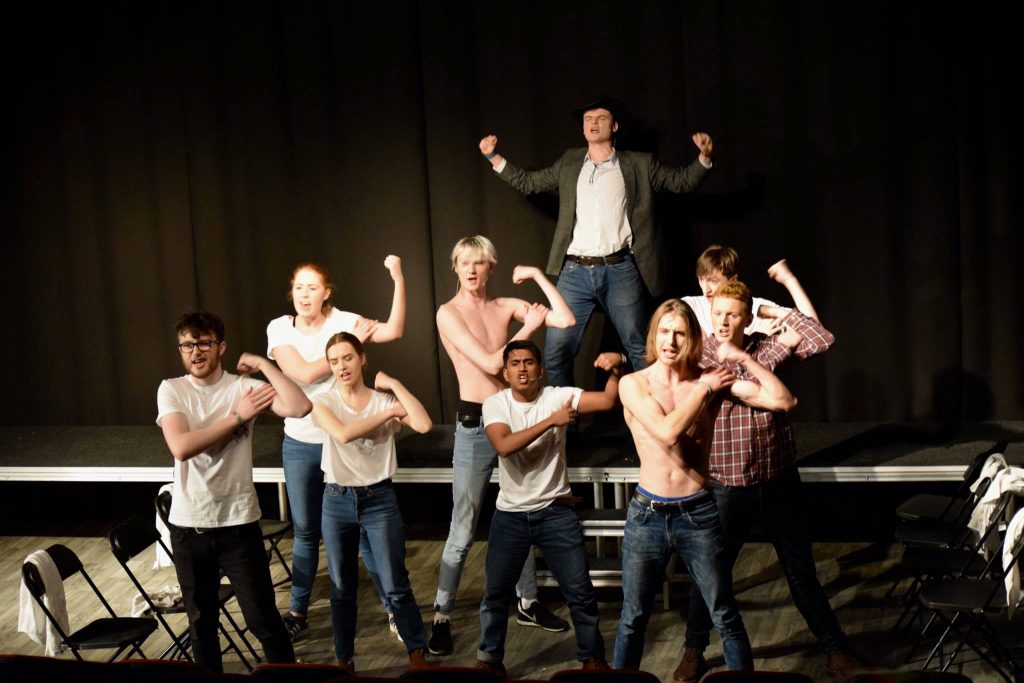 Sheriff Ed Dodd and Miss Mona used to enjoy their relationship, and business at the ‘chicken ranch’ was going swimmingly. But when TV personality and all-around do-gooder Melvin P. Thorpe publicly declares that there is a whorehouse in Texas, they both struggle to keep the place open as journalists, state authorities, and an outraged public close in around them.

As this apparent musical craze rages on in Durham, The Best Little Wh*rehouse in Texas makes a surprisingly dud contribution to the scene. The performances are solid on the part of the main cast and much of the chorus, but any spark of invention is sadly put out by technical issues and unremarkable directing.

When I say that the acting is fantastic, however, I mean it. All of the Texan accents are suitably over-the-top and humorous, which really suits the parodic and excitable atmosphere that the play seems to be going for. Particular standouts include Kyle Kirkpatrick as Sheriff Ed Earl, who exceptionally balances his softer side with his outraged moral righteousness, Gabriella Cairns as Shy – easily the most touching and involving performance – and Alice Swann as Doatsy Mae, whose solo number is another emotional highlight.

But this clear display of acting ability doesn’t translate over to the dance numbers. The choreography lacks energy, and at many points the dancers don’t even seem to be entirely clear on the moves. However, the lack of polish is less of an issue; the fundamental flaw appears to lie in the moves themselves. There are no points where I feel as if any particular move or pose exudes any kind of energy or characteristic flair; it is instead very much the kind of generic moves one would imagine if asked to picture ‘dancing from a musical’. It has also been brought to my attention that some of the choreography was freestyle, which may be a contributing factor in the slightly messy nature of some of the dancing.

Apathy is sadly characteristic of the acting style as well. Talented as the actors are, you could tell that they hadn’t been directed with any kind of unique style or flair. A painful lack of chemistry pervades many of the scenes, which is especially disappointing because of the culture surrounding the piece. Taking place in Texas, it is vital that it captured the feel of the struggles of poverty-line Southern life, but it lacks the melodramatic flavour that is typical of Southern drama. It is clearly trying to encourage the audience to connect with the misogyny and economic pressures faced by the workers of the ‘chicken ranch’, but without a definitive sense of character, it is hard to feel particularly rooted to anyone onstage.

The music, at least, captures the Southern sound and atmosphere, to Musical Director George Bone’s credit. There is a great deal of energy and life to it, and the ‘Texan whorehouse’ mood is set remarkably well, but tech issues make the music almost into an annoyance. The piano is deafeningly loud; it drowns out many of the singers, but this is certainly not the fault of the pianist or any other musicians. This piece is plagued with persistent technical issues, namely with the microphones worn by the actors. The mics often wouldn’t turn on during songs, and many of the chorus are difficult to hear. Compounding this issue is the refusal of the sound effects to play, resulting in a particularly embarrassing instance where Miss Mona fires a gun into the air and yells ‘BANG!’ to fill the void where the sound effect should be. I sincerely hope these issues get fixed in time for other performances, as the DSU is a lovely space to perform.

Overall, I’m inclined to be kind to this musical because of how charming some of the actors are, and because it is raising money for a good cause, but it is critically marred by a sad spate of audio bugs, and an awful strain of mediocre direction. I would recommend this only to someone particularly interested in the subject matter, or else just donate to Breast Cancer Now directly: