After a short rendition of ‘The Addams Family’ theme tune, the improv team begins to lightly banter with the audience to draw out three suggestions on which to build their piece; the audience supplies a setting, a title, and the name of one of the songs. After this, the cast retreats, and ‘The Legless Spider’ begins.

A good-natured pumpkin farmer meets a girl who has snuck onto his pumpkin patch so she can experience Hallowe’en for the first time. However, in a horrible carving accident, she chops off the legs of a French spider (masterfully improvised by Elle Morgan-Williams) and they set out on a quest to grow her legs back. 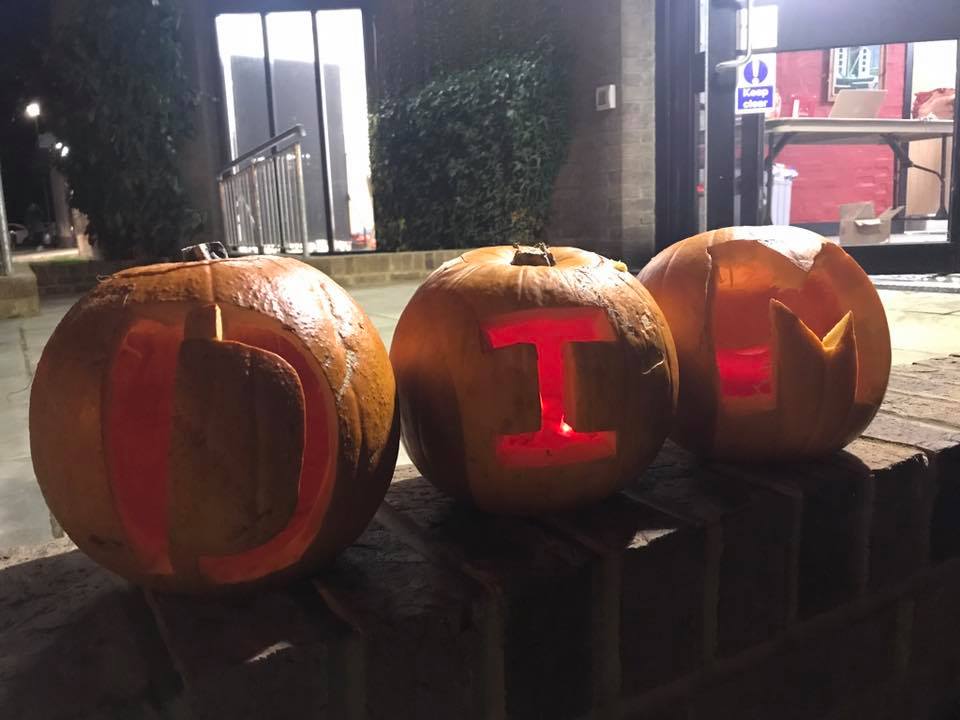 From the very beginning, the skill and likeability of the actors reassured me that I was in capable hands. Their initial interaction with the audience was playful and really encouraged audience participation, and this casual mood was maintained through their occasional bantering and mocking of hecklers. Once the musical had finished, there was a real sense of community that had been cultivated, in part, by the great chemistry built between the actors and the audience.

However, the strong actor-audience relationship paled in comparison with the incredible intergroup chemistry and camaraderie. You could tell just from the performance that the actors involved care passionately about their comedy by the way they worked off each other, every person playing a different role to create something inclusive and surprisingly satirical of the musical genre. All of the musical tropes were featured; the wide-eyed dreamer, the dependable mentor figure, the coven of villains, and, of course, the aptly named Sordid the Slug.

This mixture of musical tropes was made even more humorous by the different comedic stylings of each actor. The three witches, which served as the villain characters, performed in an outrageous pantomime style, the slug riffed sardonically on the nature of the musical genre itself, and the pumpkin girl mocked the dreamer trope through both overplaying her excitement and naiveté, as well as giving a dark edge to the character. A particular standout to me was Elle Morgan-Williams who played a seductive, England-hating French spider. Her casual one-liners and sarcastic comments added hilarious touches to the funny scenarios imagined by the team.

Imagination really is the key word here. Looking back on the narrative, it was surprising how many subplots and how much detailed lore was included in the piece. There was the slug-and-spider romance, the semi-sarcastic feminist undertones, and a surprising moment of queer romantic tension in the audience suggested song ‘Which Witch Was Witch?’ This scene deserves special mention for the way in which it sets up the premise of a long-forgotten drunken hook-up, which is then cleverly subverted by making the male witch the answer to the question above. It sounds terrible when I deconstruct it, but seeing it onstage, it felt just like it had been rehearsed beforehand, especially as they toyed with the subject of queer romance but without falling into any homophobic or otherwise problematic tropes. It was funny and mocking, but without alienating audience members.

If I had to nitpick, (which I do, unfortunately) I would say that, when offstage, the cast could have planned out some of the scenes in slightly more detail. Although they recovered excellently from any slip-ups, there were occasional moments which could have been tightened with some more careful planning. This problem particularly persisted in scene transitions; near the end, certain dialogue moments ended in awkward retreats back to their seats. I would, however, like to stress that this was a small problem which barely hampered my enjoyment of the overall piece.

Overall, this improv piece was very well-conceived and impressive, demonstrating both the skills of the actors and creating a great sense of camaraderie and chemistry, both among the actors and within the audience. I hope this group perform again soon; this is a recommendation so strong, that I didn’t even mind having to walk up to Trev’s to see it!

The AdDIMs Family: A Halloween Special is on at 7:30pm, Friday 26th October at Dowrick Suite, Trevelyan College.