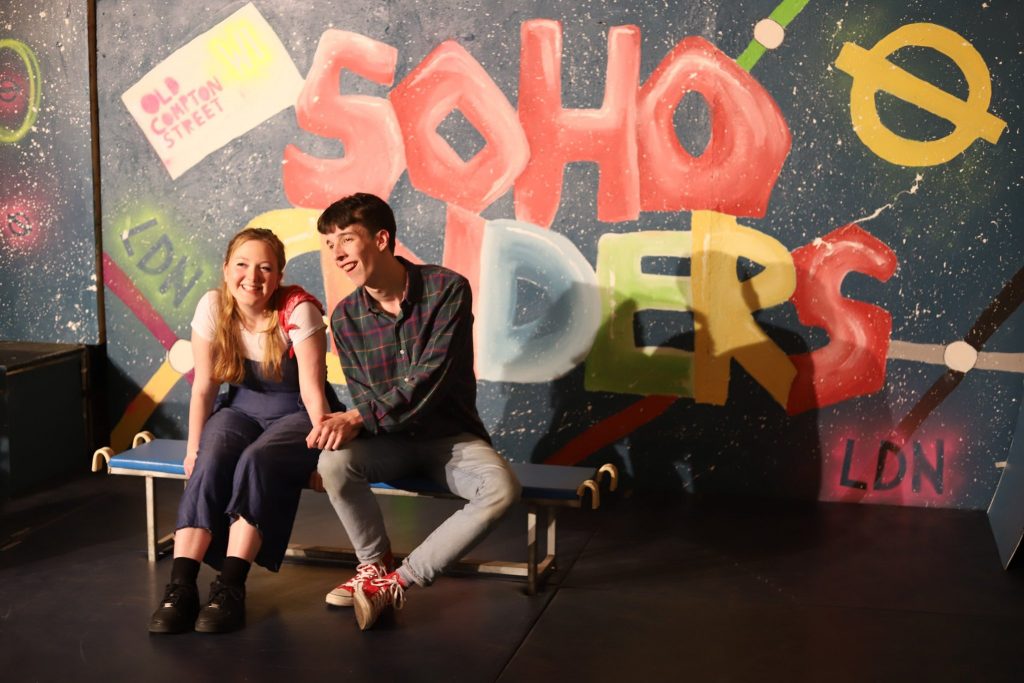 Modern reinterpretations of classic stories are so common nowadays that they tend to work in extremes. The end result is always either a dull, dreadfully uninspired slog or a dazzlingly inventive experience which breathes new life into a tale as old as time. I’m pleased to say that in the case of Soho Cinders, which retells the Cinderella story in the context of modern London’s seedy Soho region, the latter situation is exactly the case. It’s a very funny musical. In fact, this performance is downright hilarious; I certainly laughed more at this than any other Durham production, and this is achieved through the excellent attention-to-detail which is evident in every aspect of the musical. From the panto-style acting to the wonderfully tacky neon set, it is clear that the entire creative team embrace wholeheartedly the Soho aesthetic, and it is this enthusiasm which makes this performance absolutely worth your time.

The commitment to camp was evident to me from the moment I stepped into Hild Bede’s slightly dilapidated East Gym. A perfect choice of venue for the play, its peeling paint and its vibrant yet faded blue walls greatly complement the set: purple walls adorned with aggressively bright neon spray paint. Clotheslines are strewn around the auditorium, all to give this campy, cheap, makeshift feel which recreated the popular image of Soho with extreme fidelity. But it never seems like it is punching down – instead, the play is reclaiming this cheapness to create a sense of community spirit and connection, and this camp style is what makes it more dumbly fun than Glee.

Nowhere is this joyously camp style clearer than in the actors brilliantly funny performances. Where to even start with appraisal? Protagonist Robbie is made very engaging by Charlie Nicholson, who thrives despite his character’s large emotional range, and manages to stay consistently campy and fun even at the darkest moments. Katie Sterland also performs a heartfelt scene with great sympathy and adeptness as Velcro. When opening up to James Prince’s wife, she feels very raw and exposes the real heart and emotional power of a musical which could easily have come off as tacky, shallow, and inconsequential. However, the absolute comedic standouts of the piece are undoubtedly the disgusting duo, Clodagh and Dana, this musical’s answer to the original’s ugly stepsisters. They are played by Annabel Dickson and Cait Mahoney respectively, who bring insane amounts of energy to the role and are brimming with gleefully detestable panto-villain chemistry. Every time they walk onstage, everyone seems to lean forward and brace their sides for the laugh riot about to ensue. Their trashy style and tarty aesthetic is an absolute delight to watch and honestly lifts the play to new comedic heights.

Clodagh and Dana’s energy thankfully carries over to the choreography also, for which Rosie Dart and her assistant Martha Wrench are responsible. Mad credit is due to this astute pair, who take the relatively small stage space and make it feel larger than life with their complex choreography. I am being honest when I say the charm and quirky character of the bustling Soho streets is astoundingly recreated in the first musical number. Characters are scootering across the stage, zipping past each other at high speeds, and crowding together. This frenetic pace and energy transfers over to the audience, every member of which seem visibly excited throughout. It cannot be said, however, that the choreographers don’t also know when to tone it down. As over-the-top as things begin, they slowly trickle back down to Earth as the musical gets more serious and begins to explore the blackmail and fear that is rife in closeted members of the LGBTQ+ community. Staging a performance which is fun and upbeat while also examining the darker aspects of being queer, and pulling it off this well, is a marvellous moment in Durham Student Theatre.

And it is when this tragic yet hopeful emotional core is revealed, and shines in the latter half of the play, that this performance becomes more than just entertainment. It becomes something really worthwhile, because in embracing the campiness and patchwork nature of the original musical, in completely throwing themselves into the queer aesthetic, the crew has made something really fun, really worthwhile, and above all really valuable, particularly to Durham’s LGBTQ+ community. Whether you’re gay, straight, bi, cis, trans – whoever you are, I really cannot recommend this joyfully chaotic laugh riot enough: it’s Soho good!