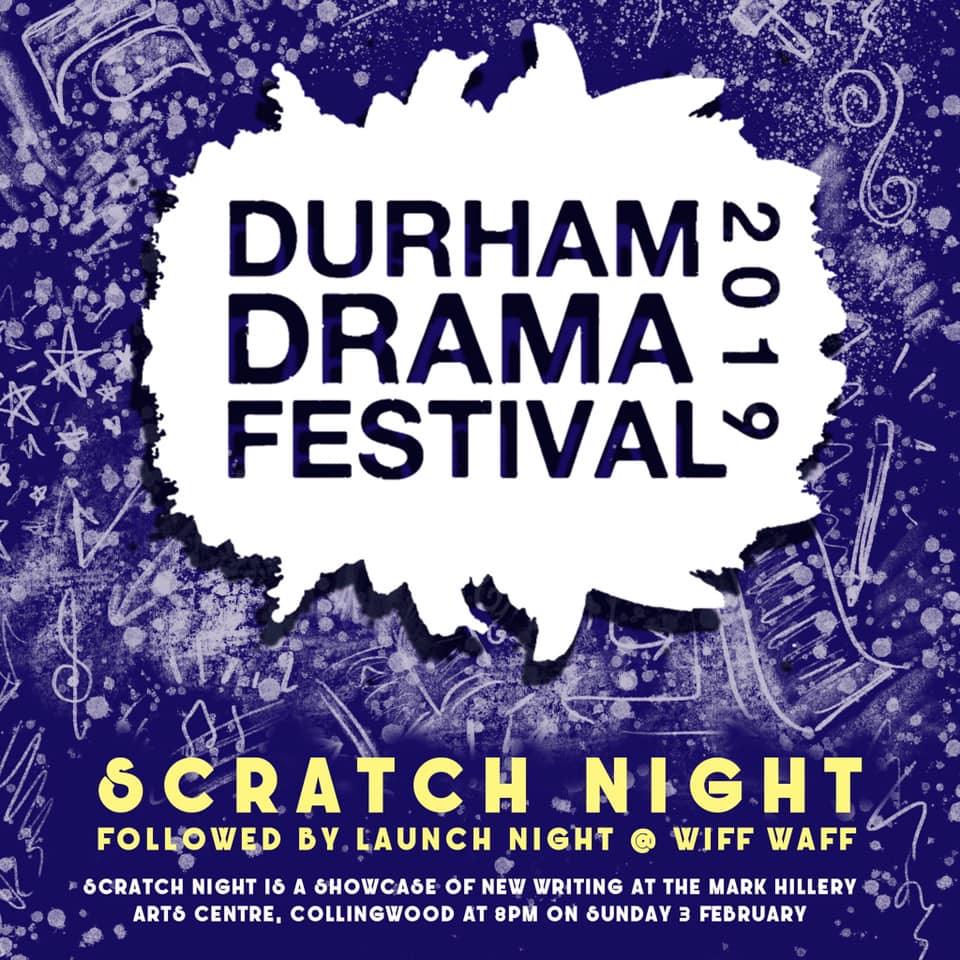 Scratch Night marks the opening of the iconic Durham Drama Festival, showcasing students’ creative and theatrical talent. This year featured four short plays, varying in style and size, all finding enthusiastic applause with the sizeable audience in the Mark Hillery Arts Centre. The largely enjoyable success of the night and the effort of all involved in the many challenging on/off-stage roles merits a huge amount of respect, setting the standard high in anticipation of the festival’s upcoming shows.

The night’s opening play, Alex Cohen’s No Entry, transports the audience to the limbo between Heaven and Hell: the post-it-note-littered workplace of a justifiably bitter clerk, who says she will inform us of our eternal fates. Fans of Rowan Atkinson or The Good Place, will be familiar with this set up. Whilst much of the opening wit provoked laughter, other lines exemplified how easily dark humour can cross the blurred line into tasteless quips, plunging the audience into unease. As the performance gains momentum, humorous phone calls with Jesus and jokes with Buddha-come-poltergeist perhaps teeter the play back over this thin line. As the sudden Apocalypse marks a distinct change in tone, the careless clerk must face up to her fate. Comedy seems to be lost in the build up to the overtly dramatic climax, only reinstated by having Highway To Hell playing after the burning red lights of hell are extinguished. Huge credit goes to Eleanor Storey for her dynamic one-woman performance- no easy feat to open the whole night with.

Next up, It’s Not You, written by Jenny Pavitt, explores mental health, strained love, and the chasm between reputation and truth. In two monologued letters, the fabric of a relationship we weren’t invested in to begin with is picked completely threadbare. Troubled actor, Dan, paces the stage delivering a heart-wrenching exposition to his girlfriend, Katie. In return, she delivers a letter about her confusion at his behaviour, whilst his silent doctors appointment goes on beside her. Ed Cook’s performance is saturated with the emotion of someone who feels like a shadow of their self. The striking line ‘I don’t think I’m friends with me’ is testament of a man broken by juggling his fractured relationship with the anguish of being a carer. Katie laments meeting her idol, in a humbling consideration of human imperfection. The hollow apologies attached to all the flowers she’s received and her desire for ‘just a flower’ is a particularly poignant moment, extremely well written and then well-executed by Abbie Priestley. There is also appropriately stoic support from Imogen Usherwood as a Doctor delivering unwelcome truths. The end is raw, a suitable close to a play about the implications of male mental health issues.

The absolute highlight of the night was the third performance, the comic genius of That’s The Way The Kabuki Crumbles by Charlie Nicholson. Complete with a mock orchestral ensemble, who provide appropriate sounds effects, and an improvised bin bag/balaclava morph suit, the laughs never seemed to end. Opening with the BUTTS Script Submissions session for a local community show, following last year’s ‘Honey, I’m Stuck In The Honey’, the surprisingly complex plot unfolds with brilliant comedic timing, clever staging and exemplary direction. It’s The Play That Goes Wrong without the contrived mishaps. Particular highlights include confusion over the definition of ‘Kabuki’, the many moments of slapstick comedy involving Lord Todd (Richard Sharpe) and his principled butler, Satsuma (Liam Boyd), and Rose Galbraith’s ‘Honey Rap’ audition. Rosie Weston delivers a perfectly pitched, eccentric performance as Mary, and Annabel Dickson showcases her role of exaggerated narration and hilarious dancing. Had the play lasted half an hour more, there would have been no complaints.

Finally, The Landlord’s Arms by Charles Edward Pipe. This is a play angled towards the good old-fashioned humour that we’ve had on our screens and stages for years – a classic British comedy skit, full to the brim of laughs, cliched gags, and cringe-worthy, yet effective puns. Two unsuccessful criminals, wannabe English Mafia Johnny and Ronnie (Jack de Deney and Jacob Freda respectively) head to a pub to try and extort money on behalf of their boss. Ronnie turns up with a croquet mallet rather than a crowbar and establishes his role as the sidekick with a few less marbles. Repeatedly breaking the fourth wall, the pay is self-aware and self-deprecating, to its advantage. The moment where the landlord, played brilliantly by Munyiva Mbai, gets her leg ‘broken’, received raucous laughter, as no attempt to even hide the lack of contact between her and the mallet is made. Another excellent moment comes to mind where Durham humour is appealed to, with the qualifier added to Johnny and Ronnie’s criminal status: ‘we went to public school!’. A simple, but highly successful play, and a fitting close to a great night of entertainment.