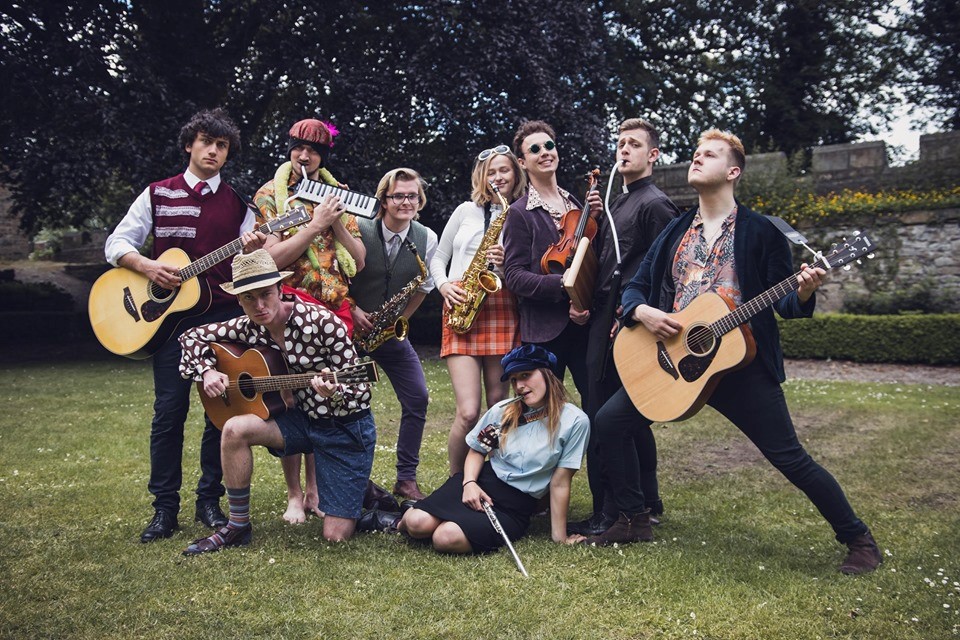 ‘Sweet smoke of rhetoric!’ Castle Theatre Company are taking their, vibrant, energetic, and hilarious production of Love’s Labour’s Lost on their summer tour this year. The play, one of Shakespeare’s earliest comedies, is not easy to tackle. The expected intricacies are complicated further by the multi-layered plot, elaborate wordplay, and truly tongue-twisting dialogue. However, the CTC pull off the performance with flair and wit. Director Barney Mercer has crafted a greatly successful production, perfect for a hazy summer’s afternoon.

This tale about mistaken identities and the pursuit of love begins with an ill-conceived vow made by King Ferdinand of Navarre and two of his friends, to become celibate for three years so they may fully dedicate themselves to academia without distraction. It is not until afterwards that they recall, with extreme exasperation, the impending visit of the Princess of France and her female companions. Adding into this mix a fantastical Spaniard, a hapless fool, and a pair of eccentric old scholars makes it only natural for comedic chaos to follow.

The beautiful surroundings of Fellows Garden in the grounds of Durham Castle could not make a more perfect setting. The audience are sat on the grass with picnic blankets and lots of food *cough* houmous, as is the Durham way. One bench is situated centre stage. The lighting on the Sun’s part is quite flawless, though it is wise to take layers for when our glorious English weather turns chilly. Actors mostly come on stage from the top of a slope that reaches to the very back of the stage area. Costard, the fool so brilliantly portrayed by Tom Murray, regularly runs up this slope in wonderful character, to plenty of laughter.

The incorporation of musical accompaniment, from guitars and trumpets, to melodicas and a violin, is the real crowning glory of the play. The opening musical rendition of Sonnet X is bright and memorable, complimenting the apt 60’s vibe provided in the choreography and costumes. Music plays during scene changes and moments of importance, also closing the play to give its notably ambivalent end a lighter tone. These clearly multi-talented actors make every transition flawless – you have to be in awe of the clarity with which such artfully complex lines are delivered, particularly from Kishore Thiagarajan-Walker as Berowne, Griffin Shelton as King Ferdinand, and John Broadhead as Don Armado, who delivers his Shakespeare in a Spanish accent. His extravagant declaration ‘I am in love!’ earns hearty laughter. Other notably humorous moments include Costard’s rambling about ‘remuneration’ in his loveable cockney-rogue manner and the three male suitors all hiding from each other, with Berowne launching himself over a hedge and Owen Kennedy’s Longaville falling flat to the ground. Fionna Monk as Holofernes delivers particularly fast paced lines as an incredulous old lady- ‘I smell false Latin!’. The three female love interests, Emily McLean as the feisty Princess of France, Florence Petrie as sassy Rosaline, and Lydia Cook as spirited Maria, are supported by Aaron Rozanski’s charismatic Boyet, and shine especially in the swapped identities scene, gaining the audience’s support in their scheming.

The play also contains a few instances of good old slapstick, with a full ragtag fight scene towards the end, and the comedy gold of fantastically awful Russian disguises combined with rather more impressive dancing. A handful of times, volume is a bit of an issue, but in an open space this is to be expected. The action is so dynamic and expressive that the issue pales to insignificance.

The entire cast are marvellous, and the play is a real joy to watch. I felt very lucky to experience the show before it heads down south to other stately surroundings for July, and highly recommend you see it now, or else follow it down!