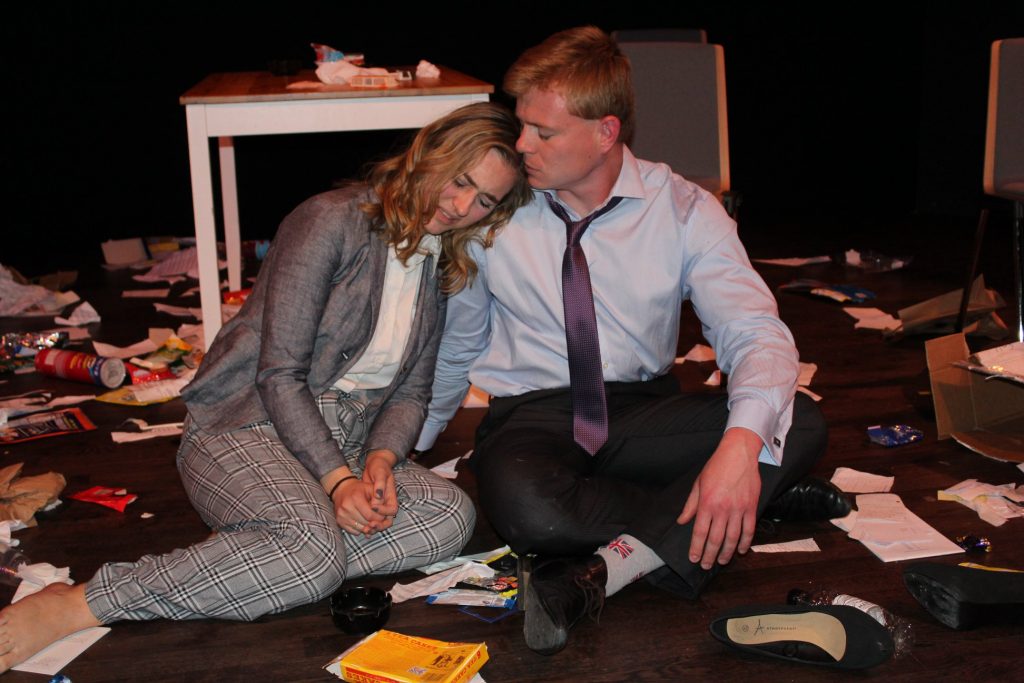 ‘You wanted cigarettes, I wanted chocolate.’

‘That ferry from Newcastle doesn’t go to Amsterdam.’

You see it in the headlines and hear it on the news, but you never think it will happen to you. Tonight we consider what it’s like when it does: How might parents react? How can anyone recover? How can the offender look their own child in the eye? What do they say to future partners?

‘You were sick of being a child.’ ‘You knew more than me [about love].’ Is a 12 year old ever old enough to be able to give consent? ‘I never wanted to hurt you.’ ‘I always wondered how you’d grow up.’ Is there more to a crime than what is said in court and what is seen by the eyes of the law? Beyond the DNA samples, the ‘facts’ of the case and the scripts rehearsed by both parties in court there lies a muddle of contradicting emotions. ‘Blackbird’ is about those complexities and trying to navigate them.

Peter rarely uses the word ‘abuse’ to describe what he did. And we get the feeling that this isn’t out of guilt or avoidance. Peter finds it hard to admit it because to him it’s a lie. He insists countless times that he isn’t ‘one of them’, those ‘sick bastards’ and that books he’s read on pedophiles don’t describe him.

Collingwood Woodplayers’ production of ‘Blackbird’ by David Harrower is, well, harrowing. Directed by Lowri Mathias, the piece demands a lot of its two protagonists who must retain exceptionally high levels of anger and energy from start to finish and although at times this does become a little repetitive, the acting remains strong. Every performer inhabits their role very well in this production, from James Southhall and Anna Donkin as protagonists Roy and Una, to those in non-speaking roles who are seen walking behind the back curtain as colleagues in the corridor, to Anna Gibson who appears refreshingly towards the end. This ‘corridor’ and the subtle changes in lighting throughout are very impressive.

The first thing to strike anybody as we find our seats is the brightly-lit set, extravagant in its meal-deal mess. Now, Peter has a job where he wears a shirt and tie and eats meal deals, but thanks to a surprise visit, where Una tells him: ‘I did your sentence for 15 years,’ tonight will be about who he used to be and whether changing his identity is as simple as a quick name-change from Roy to Peter.

The mess gives Peter and Una something to talk about, or gives at least one of them material with which to speak over the other in the early stages of the play. The occasional crisp packet or high heel shoe underfoot threatens to force Southall and Donkin out of character when they stumble, but only adds to the necessary awkwardness in the uncomfortable encounter between the two 15 years on from their last meeting. Una was 12 and Roy 40. And they were in love.

This is clearly a play of conflicted emotions. Una’s concern over Peter’s red eyes after shouting at him makes this immediately apparent. The two take turns in being the captor and wanting desperately to escape the room. Una shifts between a ghost-like, empty smile, a shivering, cowering stance, a confident and strutting one and an almost taunting grin. Volatile emotions are at the forefront of this piece, and they are extreme. Roy seems as if he could punch a wall down or collapse into tears at any given moment. Both actors give full force to each emotion, at times going slightly overboard, but the two work together extremely well to capture the interesting dynamic between Roy and Una; one resting on the difficulty of communicating love, shame and vengeance.

The second half is dominated by monologues from each character, describing ‘that night’ in exceptional detail. These are long speeches. It is difficult for the actor not speaking as there are only so many facial expressions they can make. Putting his head in his hands might be seen as a theatrical cop-out but I think it would work well with Roy, a man who eventually succumbs to listening after an almighty fight, who does his best to swallow his tears and not to remember.

Both accounts are touching in their detail and humanity, yet it is when words turn into physical actions that provide the moments of most tension.

‘Blackbird’ will be performed in The Mark Hillery Arts Centre, Collingwood College, on Sunday at 2:30 and on Monday at 7:30.