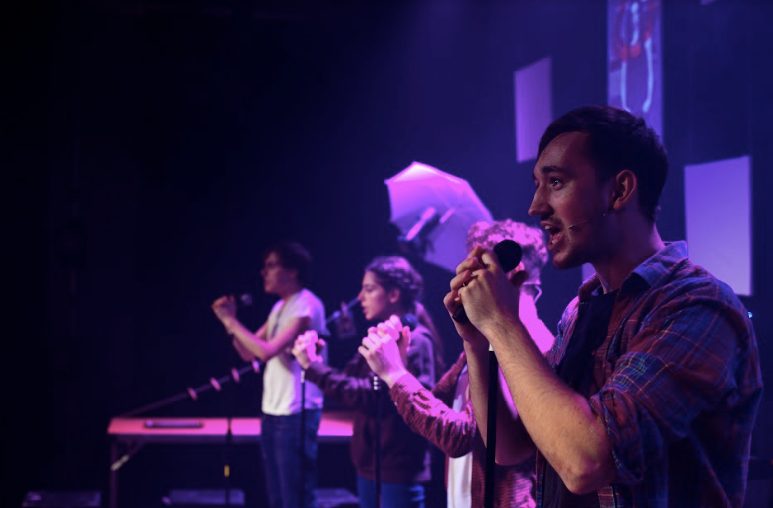 Another day, another musical showcase about love. However, ’35mm: A Musical Exhibition’ brings some much edgier and more diverse material than many of the typical upbeat, clean-cut and candy-coloured mainstays of this particular genre. Not only was it visually stunning, but its tight choreography and playful references to darker, occasionally Gothic, ideas gave it a delightful energy and subversiveness.The entire play used a darkroom setting, with most of the songs being connected to a photograph in a framing device that was very effective, if a bit cliché. This moody atmosphere perfectly encapsulated the overarching tone of the performance: it was playful but occasionally weighty. Most songs feature some form of love, whether romantic, platonic or familial, but there are also songs about death and grief, which lend a refreshing diversity that keeps the piece alive and enable it to flow smoothly. But it’s not just the lyrical themes which were diverse: many genres were drawn from in the creation of this musical, most notably country, rock, and classical.Speaking of diversity, I’m glad to say I don’t have to pull out my trademark ‘not enough LGBT+ representation’ trump card (one which I’m sure has made me infamous among the Drama editors). A running theme in this alternative musical was, fittingly, alternative types of love. Songs featured which tackled not only issues around sexuality and gay shame, but there were also some quirky standouts, such as a Gothic, Twilight-esque song which I think was about kinky vampire sex, and (my personal favourite) a sassy number about a murdering high-school prom queen.As you can imagine, such a range of styles and subjects requires performers with a suitable range to match it and in this respect the play did not disappoint. The singing was uniformly pleasant but was importantly incredibly chameleonic. Styles and moods were switched between in seconds, as did the staging which smoothly changed to reflect the upcoming song. Though nothing stood out to me, all of the staging choices were varied and reflected the atmosphere of the songs they were designed for.If we’re talking about atmosphere though, the lighting and tech work is integral to the conversation. Every single song had lighting which perfectly suited its particular tone and some very interesting choices were made, such as the menacing red lighting used at the very start while the audience were walking in. Full use was made of varying brightness and dimness such that every song had its own visual identity, to the point that many of the ‘looks’ of each song are still impressively fresh in my mind. The display on the back wall was perhaps the standout choice. Different images were projected onto large white rectangular surfaces, making them all resemble large polaroid pictures, and the images would change according to the song. This ingenious choice really helped distinguish the song’s identity and reinforce its constant theme and emotional content in a really subtle yet effective way.I cannot recommend this stylistic and edgy alternative musical enough; its depictions of various moments in life are reinforced by excellent singing and tight choreography, as well as some of the most impressive tech I’ve yet seen in a DST piece. Truly this show was picture perfect.Tone Deaf Theatre Company’s ’35mm: A Musical Exhibition’ is on 2nd-4th May at 7:30pm in the Mark Hillery Arts Centre.